Turkey's only Greek-language newspaper is threatened with closure due to declining revenue following the financial crisis in Greece. 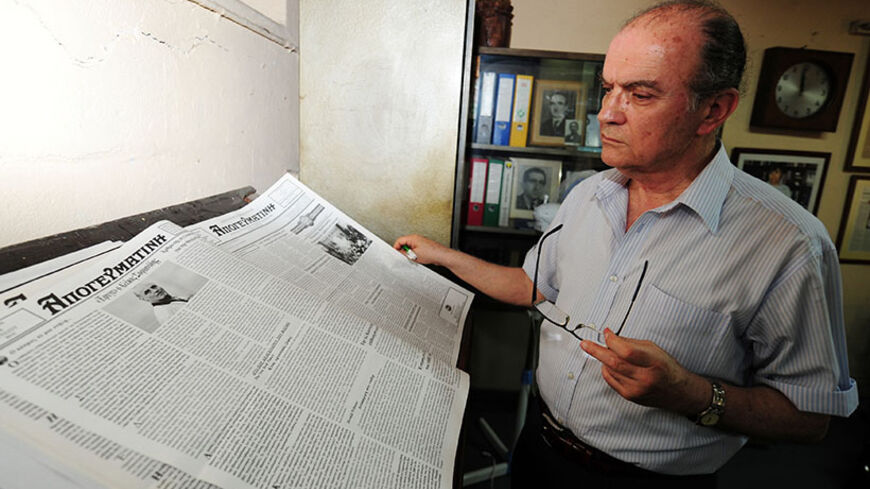 Mihail Vasiliadis, owner of the Apoyevmatini newspaper, looks at the paper in his office in Istanbul, July 12, 2011. - MUSTAFA OZER/AFP/Getty Images

I was shaken when I read the news that Turkey’s only Greek-language newspaper, Apoyevmatini, had ceased publication. I knew it was inevitable, but it was nonetheless going to be the end of a history that I did not want to come to a close. The number of non-Muslims in Turkey has dwindled so much that every negative report I hear about them adds to my fears that one day nothing will be left behind of them in this country.

I contacted Mihail Vasiliadis, the editor-in-chief of Apoyevmatini. He told me the news report had been wrong, but his explanation of why it was wrong and what the real story was made me ponder Turkey's yesterday and tomorrow.

Vasiliadis said that the newspaper will not be closed “for the time being,” but that unless he soon finds additional resources to cover rent payments, the paper's 90-year-old office in the Syrian Arcade in Istanbul’s Beyoglu district will indeed have to be shuttered. He had hoped to turn the space into a museum on Istanbul's Greek press, but could not find support for the project. He said that he is able to put the paper together from his home, for the time being.

Apoyevmatini's founders had been cousins of Vasiliadis’ father. The newspaper is published these days by Vasiliadis and his son alone. The Syrian Arcade had been built by Dimitri Vasiliadis, an uncle of the newspaper's founders, thus making Apoyevmatini a privileged tenant. Although the newspaper's ownership changed hands many times over the years, its location remained the same.

Vasiliadis describes Apoyevmatini as the “world's highest circulation” newspaper, by which he was referring to the ratio of the target audience to readership. He says almost every potential reader is a subscriber. A 2011 report by the London-based Minority Rights Group estimated that there were only 3,000 Greeks left in Istanbul. According to Vasiliadis, that number is now 1,700 to 1,800. These figures are even more distressing given that at one time, more than a million Greeks lived in Turkey, pointing to the sad history and withering away of a minority.

Vasiliadis said there are 605 Greek families in Istanbul, and 600 of those are Apoyevmatini subscribers. One wonders if indeed with such phenomenal access to its target audience whether Apoyevmatini should be considered as one of the highest circulation newspapers in the world. Regardless, the newspaper does not have the money to pay its rent.

Vasiliadis and his son work into the early hours of the morning, five days a week, to put out the paper. Their distributors deliver each edition by hand, one by one, to Istanbul’s Greeks. The money subscribers pay only meets distribution costs.

Apoyevmatini’s history of declining circulation follows the history of minorities in Turkey. Vasiliadis said there were about 120,000 Greeks in Istanbul during the 1930s and 1940s, at which time the newspaper had a circulation of 35,000. During the paper's heyday, 35 people worked to publish it.

Thear year 1964 was a crucial turning point for the Greeks of Turkey and Apoyevmatini. Istanbul Greeks paid dearly for the tensions that developed between Turkey and Greece over the Cyprus issue. Some 13,000 Greeks living in Istanbul were given 24 hours to leave the country. They were allowed to take $20 and 20 kilograms (44 pounds) of belongings. The number 20 thereafter became a traumatic symbol among Istanbul's Greek community.

Apoyevmatini’s circulation fell below 10,000 after the 1964 expulsions. That same year, Apoyevmatini was denied the option of printing paid official announcements, marking the beginning of the end of the newspaper.

Vasiliadis took over the newspaper in 2002, when its circulation had fallen to 80. Yorgi Adasoglu, who was managing the newspaper, had developed cancer and could not leave his home. As he approached death, so did the newspaper. At this point, Vasiliadis entered the picture to buy the paper founded by his father's cousins. After he managed to attract advertisements from Greece, the newspaper returned to life. It fell back into a coma in 2011, however, when the economic crisis in Greece slashed the paper's advertising revenue.

Just as Vasiliadis was running out of hope, something interesting happened. In 2011, Vasiliadis attended a discussion on minorities. In an account of the meeting reported on a website, Vasiliadis said he had reached the point of closing Apoyevmatini. A young Turk pursuing his doctorate in Holland was following the meeting online. He was touched by the report, leading him to launch a Facebook page featuring the slogan “Apoyevmatini is Turkey’s common heritage” and calling on Turks to subscribe. Vasiliadis said that within one week, 400 Turks who did not know a word of Greek had subscribed. He tried to publish a Turkish edition of the paper at least once a week, but ultimately could not afford it.

Vasiliadis said he cannot bring himself to tell his non-Greek-speaking customers that their subscriptions have expired. He is carrying on with the money raised from classified advertisements and other subscriptions. Vasiliadis and his son are now publishing the paper from their home.

In an earlier article, I had reported that Greeks were returning to Turkey. I asked Vasiliadis if their numbers can raise the Greek population in Turkey and also help his newspaper survive. He said their number is small. Those returning are not coming to work and settle in Turkey, but tend to be retirees and people seeking to recover their property. The Greek community can resurrect itself only if those who return actively engage in Turkey's work and economic life.

Vasiliadis proposed that to compensate for the 13,000 Greeks forcefully deported in 1964, the Turkish state should give work and residence permits to 13,000 Greeks as a good start. He said he can continue publishing Apoyevmatini until 2015, despite soon having to close the office.