The organizers of the land plot raffle for the new Yeruham neighborhood did not expect to receive applications from central residents hoping to relocate to the south nor from neighboring Bedouins. 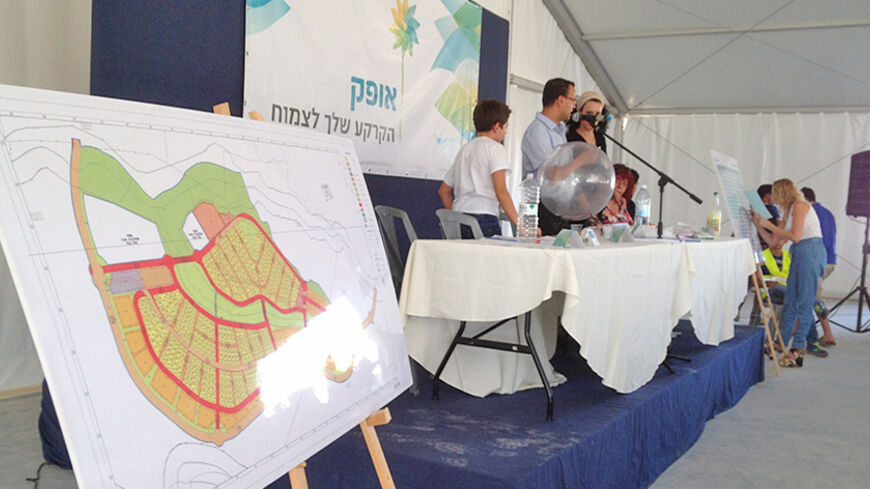 A land plot lottery for the new neighborhood ''Ofek'' takes place in a tent, near the lake town of Yeruham, July 1, 2014.

Hundreds of cars were parked June 1 in a dusty, improvised lot next to a tent erected near the famous Lake of Yeruham in south Israel. Inside the giant white tent, a lottery was being held for plots of land in the town’s new neighborhood, "Ofek." The event was set to start at 5 p.m., but by 4 p.m. the tent was already packed. Someone remarked cynically that the Tel Avivians had arrived early because they didn’t know how long it takes to get to Yeruham.

And, in fact, although most of those present were residents of the south — locals from Yeruham and neighbors from the nearby towns of Beersheba, Dimona and several Bedouin villages in the region — some Tel Aviv denizens were also in attendance, along with residents of the towns of Ramat Gan, Zichron Ya’akov and Haifa in the north. It turns out that people from all over the country are yearning for a piece of land in the middle of the desert.

The Yeruham Economic Development Company apparently did not anticipate the great demand and only raffled off 176 plots for the 440 potential buyers — a figure that surprised even the optimistic organizers.

Itai Assulin, the CEO of the company and himself a resident of Tel Aviv who signed up for the lottery, estimated that 350 people would register, at most. Each one of them, by the way, shelled out a 250-shekel ($72) “lottery fee” and deposited a 5,000-shekel ($1,450) guarantee in the hopes of winning a half-dunam property in the distant southern community, which would cost them about 190,000 shekels ($55,072).

“There has never been such marketing here,” said Assulin. “We worked using digital, we carried out viral marketing.” The "Or" movement, which seeks to settle the Negev and the Galilee regions, can be credited to a large extent with marketing the event, as well as with the branding of the new neighborhood — for example, changing its original name from “the southern suburb” to “Ofek,” Hebrew for “horizon.”

“We wanted everyone to be exposed to the great advantages of this town, as we see them,” the Or movement told Al-Monitor. “Happily, it worked, big time. The hundreds of families that signed up for the lottery were in fact expressing full confidence in the future of the town and of the Negev southern region, in general. In the coming weeks, an additional stage of the new neighborhood will be marketed, and we expect the demand to be even greater.” 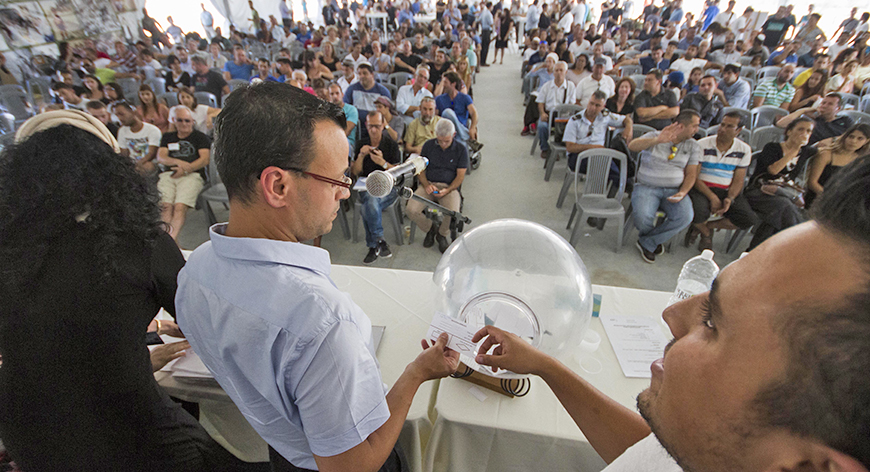 According to the national center tasked with promoting the settlement of the Negev and Galilee regions, “Interest in housing in the Negev is experiencing a sharp rise, especially on the part of young families wishing to build their own homes. In 2013 alone, we received some 18,000 requests to move to the Negev and Galilee. This is an increase of 40% compared with 2012.”

One lottery participant noted that the economic situation works in Yeruham’s favor. He said the renewed interest in the periphery, in general, and in the south, in particular, is a result, at least partially, of the 2011 social protest on Tel Aviv’s Rothschild Boulevard.

It appears that a combination of the high cost of living and an ideology of social involvement and community commitment is generating a growing stream of young people from the center southward. Take, for example, the “Noah Initiative,” a project by young people from the center whose motto is “stop protesting, start acting.” With this motto in mind, they aspire to build a new town called “Noah” near the town of Ofakim in the south.

Others are moving south individually, like Lilach and Shimon Brahum. The couple took their two children and moved from the suburban Tel Aviv town of Ramat Gan to Yeruham, a day before the lottery. “We haven’t even unpacked the boxes,” said Shimon. They, too, are participating in the lottery, hoping to move from the Yeruham house they rent to one they own. “We wanted some peace and quiet, quality of life and a gorgeous view, rather than a row of buildings,” said Lilach.

For them, the move to the south does not stem from a financial consideration. “We want a good education for the kids and also to start being more connected to our inner selves,” she added. Shimon introduced some ideology into the conversation: “Developing the country is important to us, too. The values that one acquires here are not those one acquires in the center.”

Many who signed up for the lottery are residents of Yeruham. It is whispered throughout the tent that entire families from Yeruham signed up to enhance their prospects of winning at least one lot. “They have a right,” said Assulin about the system.

After the lottery, a participant remarked that some families won two, even three lots. Some are counting on these families to give up part of their winnings, and indeed, the lottery included 25 slots for a waiting list in anticipation that among the winners some will give up or will be found ineligible under the terms of the bid.

Hodaya Miara, 24, came to the raffle with her two children. “I was born to parents who were born in Yeruham, and their parents immigrated from Morocco and came to the transit camp, set up after the foundation of Israel, in Yeruham. I’m staying put,” she said. She tried living in the town of Ashdod, an experiment that lasted two years, until she understood she was better off going back home to Yeruham.

“My dream is to build a private home,” she said, “and that’s not possible in Ashdod and certainly not the center of the country.”

Miara is classified as “homeless,” a somewhat extreme designation for people who simply do not own property. Not to worry, she’s not out on the street. Her parents own several houses in the town and allow her and her family to live in one of them. The lottery gives priority to local families who do not own property, and Hodaya's family does, in fact, win a lot, the 15th on the list. “Nice,” said one of the organizers, “that means she’ll have a house with a view.” Yet, winning the lottery is not enough. The winning number determines the place in line to pick a lot, an event which will be held in August. Winner number 176 will unfortunately be stuck with a lot that no one else wanted.

Liel Biton, too, is a local daughter, but her number did not come up. She is 22 years old and she signed up with her partner, Roi Bettito, 26, from Beersheba. “Beersheba is an expensive city,” he said just before the lottery. “You have to sell a kidney for a house. So you look around.” Tel Aviv and its surroundings are not even on their list.

Another participant in the lottery is Abu Kosh Ali from the Bedouin village of Arara, an officially recognized community of 17,000 residents. The organizers boast of the fact that the Bedouin community is taking part, too. But Abu Kosh is not doing it out of a strong desire to integrate into a Jewish community. “We have no lands in our village,” he said, “so we had no choice but to look elsewhere, and the closest for us was Yeruham. Of course, I would have preferred to build a house in the village, but we have no lots. The Jewish community doesn’t bother me, we live with them all the time, but I prefer living near the family.”

Not all the Jewish participants are happy that Bedouins are included in the lottery. “I could get a wonderful Bedouin neighbor and a horrible Jewish neighbor,” Miara said with reservation. “But it’s hard for me, the fact that they’re not Jewish. I don’t want the families to mix, heaven forbid. It’s not out of racism, we in our family are not right-wing radicals, but we believe this is our land.”

Bettito and Biton were much more emphatic. “I don’t want my kids growing up with them,” she said. He added, “They have their areas, their living space, let them stay there. Why mix?”

Barhum, on the other hand, welcomed them. “They contribute to the state. They enlist in the army, they should be given an opportunity to integrate into any community.”

In the end, only one Bedouin wins a lot. If he does, in fact, build his home in Yeruham, he will have to fit into Jewish society. The Barhum family didn’t win, either, but they are not disappointed. “It’s OK. We’ve just moved down here. We have time,” they said.

The lottery is held under strict supervision to ensure there is no discrimination or fraud. It works like the national Lotto: The names of all the participants are thrown into a see-through plastic ball placed on a stage in the hall, and the names of the fortunate winners are pulled out one by one … some are pulled out by an excited little girl. Sounds of joy are rarely heard when a name is called out. At most one hears enthusiastic clapping. “You might think they’re sad to have won,” someone said.

After the lottery, when it’s clear the event has been a success, Assulin stood with downcast eyes. You’re not pleased, I asked, and he answered: “Of course I’m not pleased. I didn’t win.”