Lebanon: The summer when everything went wrong 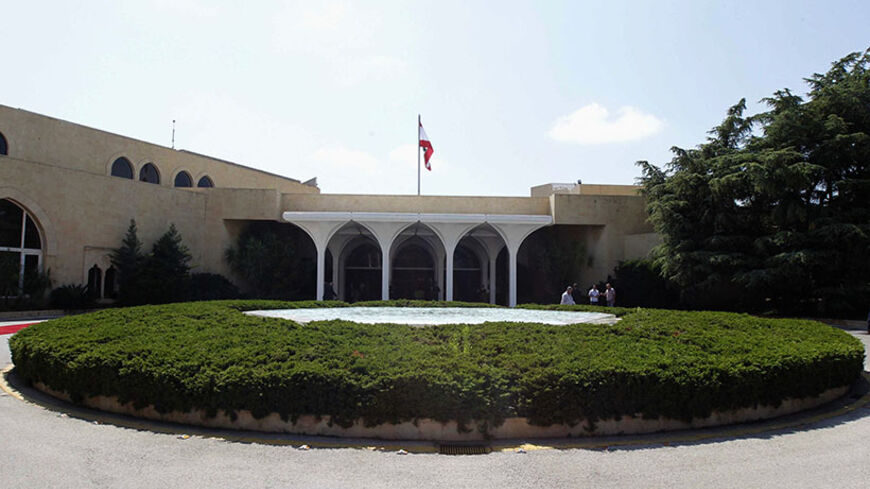 A general view of the presidential palace is seen during a farewell ceremony for outgoing Lebanese President Michel Suleiman in Baabda, near Beirut, May 24, 2014. - REUTERS/Mohamed Azakir

Some Lebanese smile and cynically repeat: It may be the end of the world! It’s the last summer for Lebanon!

They say that as they review the successive and accumulated crises: Their country has been without a president since May 25, in light of the seemingly immense difficulty of electing a new one. Some predict that the Baabda Palace, the presidential residence on a plateau east of Beirut, will remain vacant and its lights turned off for many months.

After the crisis of the presidential vacuum, it seems that parliament is facing a similar fate. About a year ago, there appeared to be a general Lebanese inability to hold parliamentary elections. Thus parliament’s term, which was set to expire on June 20, 2013, was extended. The deputies decided to resort to a legal heresy in democratic systems because they extended their own parliamentary mandates and stayed on their chairs as representatives of the people without seeking the latter’s opinion in the matter.

Yet the extension they carried out a year ago was optimistic, because they thought it was long enough for matters in the country to return to normal. They thought that a new president would definitely be elected by spring 2014, and that this would allow for normal parliamentary elections later. So they extended their mandate only to Nov. 20, 2014.

The extension passed quickly and no president was elected. The date to elect new deputies is nearing, amid the same distressing circumstances. Aug. 20, 2014, is the deadline to call for elections. Ninety days later, Lebanon could be without deputies, a parliament, or an authority that passes laws and monitors the government. However, that probably won’t happen because an agreement to extend parliament’s term is expected among most sects and parties.

Thus talk has begun about a long extension, one that is not for just 17 months, like the previous, optimistic extension, but an extension of at least two years. This is based on a realistic reading of the Lebanese crisis, which is linked to a regional crisis that is worsening every day and that will drag on for a while.

In fact, during the cabinet’s latest meeting on July 3, Finance Minister Ali Hassan Khalil raised a problem faced by his ministry and its inability to pay the salaries of state employees after the current month of July. He cited a legal-bureaucratic reason: Since 2005, the successive Lebanese governments have had no budgets, as required by the constitution. That was dealt with by adopting special laws in parliament that permitted governments to pay special funds pending the passing of a budget. Today, the last of those funds has ended and a number of political forces are boycotting parliament and are refusing to legislate in the absence of a president of a republic. This threatens to make the Lebanese state, in form and on paper, bankrupt, starting at the end of August.

The problems of the state administration don’t end there. The public sector, in the public education administration, is still under intermittent labor strikes and sit-ins to demand the adoption of a law raising the salaries of state employees. It is an anomaly that the Lebanese state has not seen before. Two weeks ago, the official high school exams were in danger because the teachers who didn’t receive salary increases declared their boycott of the exams and their refusal to give their test questions or to monitor the exams, thus placing the fate of the school year for more than 200,000 pupils at stake. The crisis then ended — without really ending — with a hybrid agreement where teachers agree to conduct, but not correct, the exams. So the exam results will not be released unless parliament approves their demands, and that hasn’t happened yet.

The crises don’t stop there. With the invasion of northwest Iraq by ISIS, suicide bombings have returned to Beirut. There have been three suicide bombers in less than a week, raising the number of suicide bombings in Lebanon since November 2013 to 17. The first was on Nov. 19, 2013, against the headquarters of the Iranian Embassy in Beirut.

As the suicide bombings inflame Lebanon, the warm Lebanese summer is gradually progressing, with temperatures reaching 40 degrees Celsius (104 degrees Fahrenheit) in some areas of the country. In those circumstances, the chairman of the public works parliamentary committee, MP Mohammad Qabbani, warned of a catastrophic Lebanese summer, with a growing deficit in electricity generation, and a government demand to raise electricity prices to reduce the electricity fiscal deficit. There’s also a water shortage, a first for Lebanon in decades. The amount of rain accumulated throughout the winter season was less than one-third the average, which is between 750 mm and 800 mm (29.5 inches and 31.5 inches) per year.

The electricity and water shortages are compounded by more than 1 million displaced Syrians in Lebanon, putting pressure on the Lebanese economy, which was already weak, and on the public debt, which stands at more $64 billion. All those factors are posing an existential crisis, according to what Lebanese Foreign Minister Gebran Bassil said at a news conference on July 4.

Lebanon is mired in crises of the presidency, parliament, government, security and the economy, as well as the issues of employee demands, student exams, electricity, water and hot weather. The only thing missing to complete the apocalyptic scene was a literal earthquake … which just happened. On July 6, shortly after midnight, a magnitude-4.1 earthquake shook southern Lebanon, followed by a few aftershocks. They caused no damage or injuries. But the picture is now complete in the Lebanese satirical impressions: It’s the end of the world. It will be a long and final apocalyptic summer … before either a complete solution or the end.