Iran's supreme leader has said that the Israeli and Palestinian people should hold a referendum to decide their fate and that until that happens, the West Bank should begin an armed struggle like Gaza. 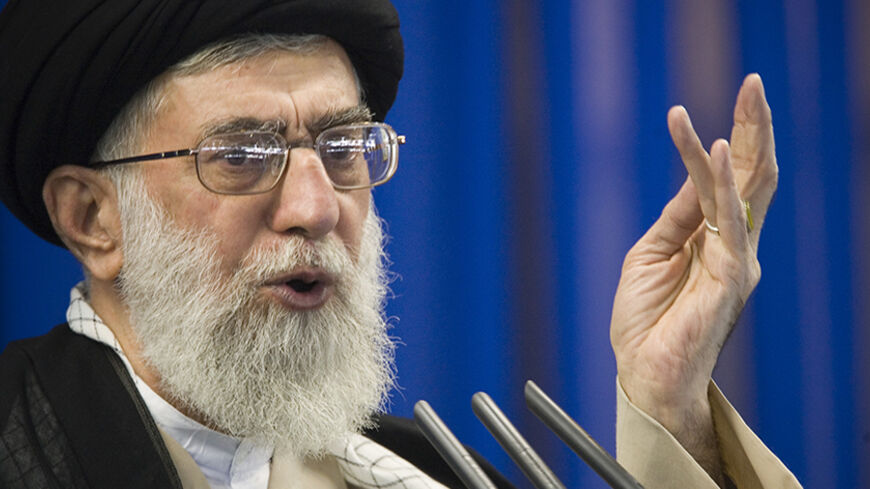 Iran’s Supreme Leader Ayatollah Ali Khamenei has called for a referendum between Israelis and Palestinians to decide the fate of the government that rules over them. Until such a referendum takes place, he said, the West Bank should be armed like Gaza.

“The issue of Gaza and the calamities that have befallen the people of Gaza — which has a history — needs attention from two perspectives,” Ayatollah Khamenei said July 23, during a speech to university students. A transcript was made available online at Khamenei.ir.

“The Zionist regime is a regime that from its illegitimate birth was built on overt violence, and they don’t deny it. It’s built on an iron fist. They say it everywhere; they take pride in it — this is their policy. From 1948, when this fraudulent regime came into existence, for 66 years, the policy of the Zionist regime is this. Of course, before this regime was officially recognized and was imposed on the region by the colonialists, the Zionists committed many crimes in Palestine.

"During these 66 years, as a government and a political system, they did whatever they wanted to do. Any violence that was contained in their mind, that one government can do toward a people, they did.

"We presented a mechanism of action for the world that no one can find fault with. We said that of these people who live in this region and come from this region and belong to this region, to take a poll or survey. Meaning take a referendum — the regime that is ruling this region to offer a referendum. The meaning of the dissolving of this regime is this. The mechanism is this. It is something that the logic of the world today grasps, understands and accepts, and it is doable. We even presented its form to the United Nations and international bodies, and it was discussed.

"If God willing, it is eradicated, even better, but while this fraudulent regime is there and not eradicated, what’s the cure? The cure is a strong and armed resistance against this regime. In confronting the Zionist regime, strength needs to be shown from the direction of the Palestinians.

"No one should assume that if not for the missiles in Gaza, the Zionist regime would hold back — no. Look at what they do in the West Bank. In the West Bank, where there are no missiles, there are no arms, no guns, the only tool and weapon of the people is a rock. See what the Zionist regime is doing there: They destroy people’s homes, they destroy people’s farms, they destroy people’s lives. … Someone like [late Palestinian leader] Yasser Arafat, who cooperated with them so much, they couldn’t tolerate him. They put him under siege; they humiliated him; they poisoned him.

He also said that there is a responsibility for political support for the Palestinians from across the world as well, in particular protests.