Will Palestinian unity fall victim to crisis over murders?

Al-Monitor’s Israel and Palestine Pulses cover the escalating crisis over the murder of three Israeli youths and a Palestinian teenager. 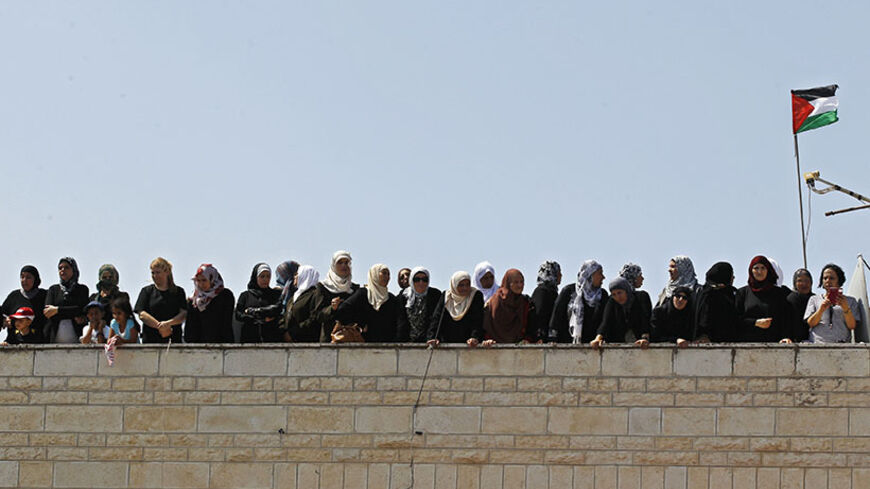 Palestinian women watch from a rooftop as the body of Mohammed Abu Khdeir, 16, is carried during his funeral in Shuafat, an Arab suburb of Jerusalem, July 4, 2014. - REUTERS/Ammar Awad

Ben Caspit writes this week that although Israeli Prime Minister Benjamin Netanyahu has sought to restrain his more hard-line Cabinet ministers advocating a wide-scale military operation against Hamas, he also considers the latest crisis over the murder of three Israeli youths an opportunity to break the Palestinian unity agreement.

According to Caspit, Netanyahu has “… tried leveraging the event as much as he could to apply heavy pressure on Palestinian President Mahmoud Abbas to end the reconciliation. Netanyahu’s motive is not entirely clear. After all, he entered the negotiations with the Palestinians about a year ago very reluctantly — as if forced to. The reconciliation between Hamas and Fatah provided him with international justification and a great pretext to freeze the diplomatic talks until further notice. If the reconciliation is indeed annulled, the international community will renew its call for the resumption of the negotiations, thereby renewing the pressure. And yet Bibi (Netanyahu) is pressing on at full throttle.”

Geoffrey Aronson speculates that the pressure on Hamas could include a broader threat to Abbas and the Palestinian Authority (PA) itself. Abbas’ credibility took a hit among some Palestinians this month following a June 18 speech in which he made the case for security cooperation with Israel over the abductions.

Asmaa Al-Ghoul reports that Hamas made gains in popularity at Abbas’ expense during the abductions, as some Palestinians considered him too willing to cooperate with Israel.

Julian Pecquet writes from Washington that the murders of the three Israeli teens will spur Congress to put further conditions on assistance to the PA.

Mazal Mualem argues that Netanyahu has not done enough to restrain his right-wing coalition allies and has thereby contributed to an atmosphere of vengeance in Israel.

Daoud Kuttab similarly writes that such an atmosphere condones an attitude of collective reprisal, which violates international law. He adds that the current crisis, including the reprisal murder of Mohammed Hussein Abu Khdeir, 16, must be understood in the context of Israel’s policies in East Jerusalem.

He further questions whether Israeli officials may have known, from the first day of the kidnapping, that the three boys were likely dead. The release of the full tape of a chilling phone call made by one of the boys from the car of the kidnappers on June 12, seemingly minutes after the abductions and including sounds of gunfire, has put into question the whole Israeli public relations campaign following the event that may have given false hope to the Israeli public that the victims were still alive.

Shlomi Eldar reports, “From the moment that the abduction of the three teens became known, the defense and political-diplomatic apparatuses closed ranks to conceal and deny the truth. At the same time, the 'Return Our Boys' operation was launched; its very name shows that the IDF misled the Israeli public into thinking that its soldiers, who were raiding extensive neighborhoods in Hebron, were searching for the abducted youths," and "Only those who heard the emergency call recording knew that the best one could hope for was to bring the boys to their final resting places."

While Hamas and Palestinian Islamic Jihad officials are publicly defiant in the face of Israeli threats of retaliation, as Ghoul reports, they are also denying complicity in the murder of the three youths and privately conveying a desire to avoid escalation, according to Adnan Abu Amer.

Akiva Eldar writes that the crisis should be a wake-up call for a real diplomatic solution that addresses the Israel occupation of Palestinian territories, the core of extremism and violence: “One would expect a prime minister with the temerity to have his own 'diplomatic doctrine' to say that the path to a permanent agreement is the only path to peace. A leader who once promised to advance a two-state solution should have explained how he plans to remove the obstacles along the way to peace. He should have said that walking in place while vainly searching for unilateral paths only leads to more and more tragedies like the triple murder in the occupied territories.”