Members of the Hamad family were sitting drinking coffee in front of a relative’s home when an Israeli strike claimed their lives. 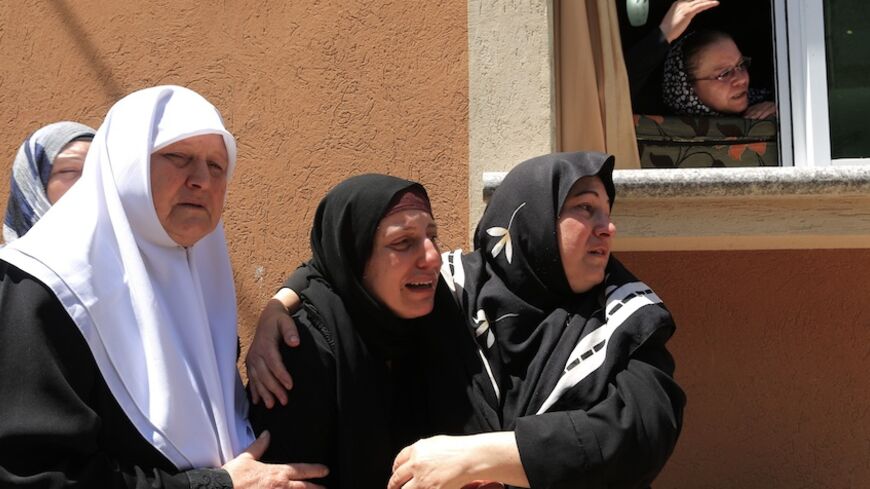 A Palestinian relative of the five members of the Hamad family who were killed in an Israeli missile strike late Tuesday grieves in the family house during their funeral in the town of Beit Hanoun, northern Gaza Strip, July 9, 2014. - Wissam Nassar

BEIT HANOUN, Gaza Strip — In the early hours of July 9, Hafez Hamad, 37, was sitting in a small courtyard in front of his house, along with his wife, Suha, 31, his mother, Fawzia, 70, his brothers Ibrahim, 35, and Mahdi, 41, and Mahdi's teenage daughter Dina. They were chatting and drinking coffee, escaping the power cut inside their home, when an unmanned Israeli aircraft fired a missile, killing them all.

Al-Monitor spoke with Amir Hamad, the 11-year-old son of martyr Hafez. With a pale face after losing his father and mother, he said, "I was sitting beside my father and we were chatting when the plane bombed the location. I wasn't injured, but I saw everyone on the ground. I screamed out for my father, yet he didn't respond. I lifted up his hand, but it fell limp. At that time, I knew he had died. I picked up my little brother Nour and ran toward the house."

When Al-Monitor met with Amir, along with the relatives of his martyred mother, he spoke about his brother Nour, 5, who is still in hospital, and his sister Lamis, who is not yet 6 months old. He also has two other brothers, Adam, 3, and Mohammed, 9.

Amir was suppressing his grief and tears, trying to appear strong. This 11-year-old will now have to carry the burden of looking after his younger siblings after Israel took his parents away. "We buried them a little while ago. We said goodbye to them. … I'll take care of my brothers and sister," he said.

His baby sister Lamis cries most of the time. She was still being breastfed, and will no longer receive her mother’s tender care. But breastfeeding will not be the only thing she misses from her mother. She will go into the care of her relatives. "I will take Lamis and raise her with my daughters," a female family member said.

But who will be responsible for Lamis? It's not a matter of days or even weeks, but rather many years.

Al-Monitor spoke with the only surviving brother of the martyred adults, 45-year-old Nabil. With a noticeable sigh, he said, "We each ate the Ramadan iftar in our own homes at sunset, and then I went to visit one of my married sisters. Shortly after, I heard the explosion. I ran toward where people had gathered, which was at my brother Hafez's home. I found that they were all just a pile of flesh."

He said it was hard to determine who had died and the extent of the injuries of the children who survived — Nour and Rakan, both 5 years old — because of the power cut. The two are now in intensive care at al-Shifa hospital.

"We felt the blood on our hands, we were literally drowning in it, but we couldn't see because of the darkness … they left me alone," Nabil said.

The funeral was held on the afternoon of July 9. The coffins of Hafez and Mahdi were wrapped in the flags of the Islamic Jihad movement and the Popular Front for the Liberation of Palestine, of which they were nonviolent members. They were all mourned in a single funeral and buried in the same cemetery.

Their cousin Numan Hamad, 46, said, "We buried them in the Sharqia cemetery located along the border, and this required security coordination that was carried out by the Red Cross in Israel, because we don't want more losses in the family."

After the funeral, Ibrahim's wife, Israa, 27, was leaning against the wall at the entrance to the family home. She was unable to raise her head as she carried her son Taym, 4. "Daddy was martyred. … He's gone to heaven, along with grandmother, uncle Hafez and uncle Mahdi," said Taym. His tongue pronounces the words easily, but his eyes reveal the sudden and incomprehensible loss of his father.

"We were sitting together, then my husband left to sit with his mother and brothers. Minutes later I heard the bombing, then saw that he had been martyred," said Israa.

The family members seem unable to bear the grief. The widow of Mahdi, Abeer Hamad, still can't believe that she lost her daughter Dina and her husband in one night, while her son young Rakan is in critical condition.

Blood mixed with water and dirt, this suffocating smell still fills the atmosphere. Their older sister Ibtisam, 50, said, "When I heard the bombing I called them, but they didn't respond. I ran like crazy with my children and saw the ambulance carrying my brothers. There was small shrapnel all over their bodies."

Israel has committed a number of war crimes in the past by targeting entire families, most notably the bombing of the Samouni family in the 2008-2009 war, when dozens of civilians taking shelter in a house were killed. In the current aggression, families have again been targeted, including the Kawareh and Hamad families on July 8, the Hajj family at dawn on July 10 and the Ghannam family at dawn on July 11. The number of martyrs has increased rapidly to reach 166 at the time of writing.

Raji al-Surani, the director of the Palestinian Center for Human Rights, told the local news agency Media24 that the presence of a military member among a family does not allow Israel to commit war crimes, for the other family members remain civilians protected in times of war, according to international humanitarian law.

"What happened to the Hamad and Kawareh families in the north and south of the Strip is a massacre and a war crime in violation of the rules of international humanitarian law, including the Fourth Geneva Convention of 1949 regarding the protection of citizens in times of war," said Surani.

Young Taym stands looking at the press and the cameras. There is a sort of ridicule in his eyes, and he is right; any words of consolation or press interviews with family members seem nothing more than an intrusion on their deep sadness and great pain.