The Palestinians concede they are miles behind Israel in public relations as international media largely repeat Israel’s account of the war. 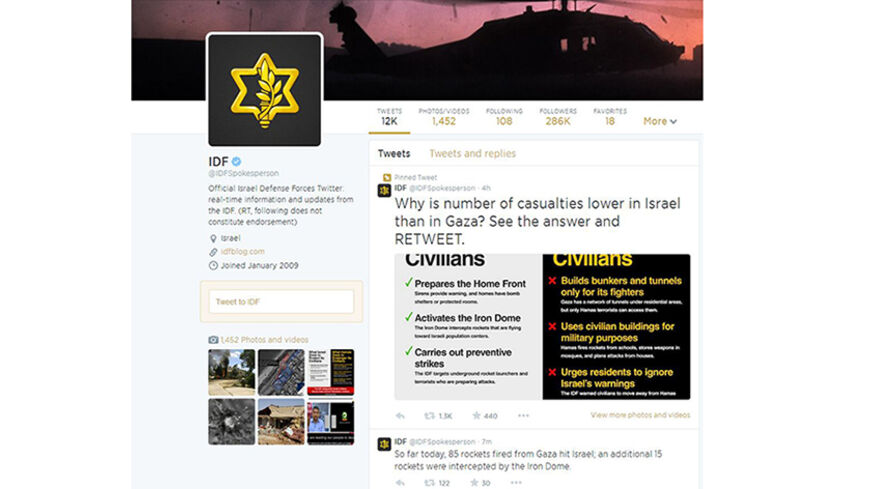 A screenshot shows the IDF Twitter feed on July 14, 2014. - Twitter/@IDFSpokesperson

Alongside every war waged by the military is an equally important war of words. The current Israeli war against Gaza is no different.

The Palestinian and Israeli narratives are so divergent one would think people are talking about two different conflicts. The Israeli narrative revolves around a self-defense argument, specifically that Israel is defending itself from Hamas rockets that have turned the lives of innocent Israelis into a psychological hell because they have to go bomb shelters every time warning sirens blare.

Palestinians, on the other hand, claim they are the victims because the Israelis started this unprovoked war. They insist that Israel, without substantiation, began by blaming Hamas for the abduction and killing of three Israeli settlers. This unproven accusation was then followed up with massive arrests and other punishments, including house demolitions, travel restrictions on Palestinians in the West Bank and bombings in Gaza. When Palestinians in Gaza responded by launching rockets toward Israel, Palestinians argue, the Israelis launched the current disproportionate war whose victims are largely civilians.

One sacred Israeli narrative is that the Palestinians celebrate rocket attacks against Israel, while Israel regrets every missile that misses its alleged military target. A July 9 image that went viral on social media demolished this argument. The photo shows Israelis in the south sitting on beach chairs while watching the bombing of Gaza with glee.

Of course, the actual results of the attacks belie Israeli assertions. By Saturday, more than 150 Palestinians, most of them non-combatants, with many children among them, had been killed by Israeli fire, and more than 1,000 had been injured. No Israeli has been killed as a result of the unsophisticated home-grown Palestinian rockets. George Galloway, the maverick British member of Parliament, was so offended by the BBC's coverage of the current crisis that he tweeted his decision not to pay the license fees to the British public broadcaster.

Maher Awwadeh, director of external media at the Palestinian Ministry of Information, said the ministry works well with local Arabic-speaking media, but is not faring as well with international media. “We make it possible to set up interviews for local media, and we encourage them to hold joint broadcasts,” he told Al-Monitor from his Ramallah office by phone. Awwadeh said, however, that it is an uphill battle to compete with Israeli public relations when it comes to international media.

“When you watch how the Israeli PR machine works, you can easily see that the international media is biased in their favor. The Palestinian ministry monitors the international and Israeli media, and we correct them when we see major mistakes,” said Awwadeh. He also asserted that Palestinians often fall into a trap because “we feel that we need to publicize bloody pictures, yet we never talk about fear among our people while the other side excels in this area.”

Younis stated, “I often feel alone and isolated in the face of the many who are propagating the Israeli narrative.” While the hashtag #GazaUnderAttack has been trending, most social media efforts are in Arabic. Younis, who introduced the hashtag #standupandspeakout, noted that most senior media officials have no social media accounts, stating, “They only use email and don’t even know what a hashtag is.” She also said, “The Israelis have a media strategy that is based on a clearly planned propaganda position. They avoid any debate on social media.”

Bassem Othman, a senior Palestinian media analyst, framed the problem in broader political terms. “We can’t have a media strategy before having a national political strategy,” he told Al-Monitor. “Abu Mazen (President Mahmoud Abbas) has his strategy based on political negotiations while Hamas has a military strategy. We can’t succeed in explaining our narrative until we have a unified national strategy.”

Othman, who headed the media department of the Palestinian Legislative Council, said that Palestinian media is divided between partisan media, government media and independent media. “Even in the government-owned and -run media there is no unanimity. The president’s media is not in sync with the Government Media Center or the Palestinian Ministry of Information,” he said.

Othman also noted that many intellectuals and activists are opposed to official political policies and therefore cannot be easily integrated into a joint media strategy. “Look at the official media leaders. See how often they meet, and you will realize why there is an absence of a unified strategy,” said Othman.

Despite the relative lack of success by Palestinian media activists, the Israeli and Palestinian narratives are at loggerheads around the world. Narratives have their own way of being created and kept alive. At the end of the day, it is the lives of people that matter, and the challenge is how to give voice to the voiceless and to avoid being seen as trying to fool the public. With information technology and an active, well-informed global public, it is hard to completely fool the public. As the saying goes, you can fool some people all of the time, but you can’t fool all of the people all of the time.