Author Mario Levi says although he has been targeted, he has a positive take on these events as it also generated unprecedented support. 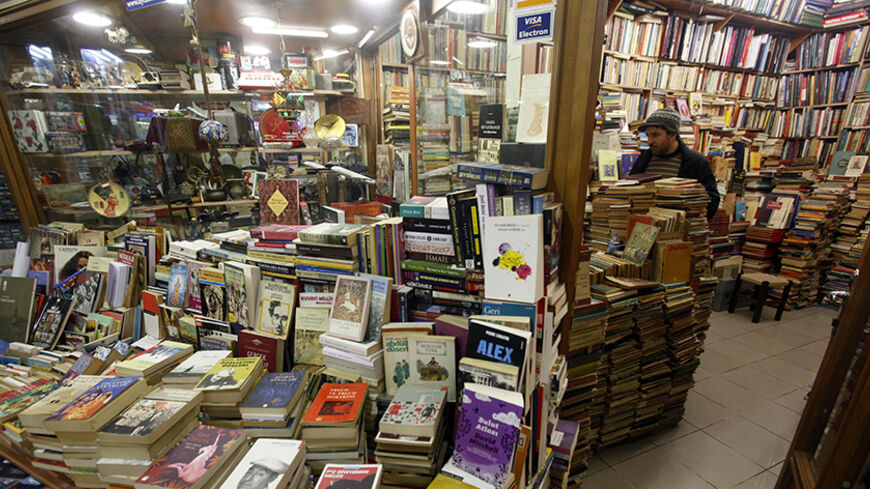 A man searches for a book at a market for secondhand books in Istanbul, March 14, 2012. - REUTERS/Osman Orsal

When Turkish Prime Minister Recep Tayyip Erdogan on July 19 said Israel’s operation in the Gaza Strip “surpassed Hitler in barbarism,” he also warned people not to get carried away and harm Turkey’s Jewish citizens. “Israel is acting according to its own temperament. But I call on our citizens. I do not find it right to take things out on our Jewish people in this country.”

Mario Levi, "the first writer in Turkish literature to declare his Jewish identity and write about Jewishness," however, became the target of a group on social media July 23 calling for boycotting his books and holding him responsible for Israel’s actions.

As this went viral in the Twitter sphere, Levi tweeted: “In some people’s eyes, my books also took their place on the list of ‘Jewish products’ that need to be boycotted. Am I supposed to experience this in my dearest and beloved country?” he wrote. “Words are not enough to tell how much this tragic war in Gaza and the death of innocent children is afflicting me with pain.”

The more Erdogan's presidential campaign rallies become virulent against Israel, the more Turkey’s Jewish population feels concerned. Some Jewish families in Istanbul told Al-Monitor of a heightened level of worry this time around as this criticism is building up against them, forcing them to feel unwelcome — to say the least. “We are taking some precautions these days,” one Jewish woman in Istanbul told Al-Monitor. “We changed our daily schedule and choose to spend more time at home. It is becoming different.”

Abdulkadir Cevik, head of the psychiatry department at Ankara University's faculty of medicine, approaches this growing unrest from a different vantage point. Speaking to Al-Monitor, he stressed the unique relationship between a leader and his followers, where the leader is in a better position to communicate and provide his followers with guidance, and in this perspective the followers feel empowered with the direction set for them. “The prime minister could have a huge impact on his followers with just one word,” he said. “That must be why he felt the need to caution people [after making the Hitler comparison] not to target Turkey’s Jewish population. He must have felt worried about the link. After all, there can be fanatics in any society.”

The genie, however, is out of the bottle. There is an accumulated sea of anger all around against Israel and the Jews. Levi also stressed this as he criticized the one-sided coverage of the events by the Turkish media. “It is impossible not to have a moral approach on what is happening in Gaza,” he said. “We can, however, have a constructive discussion if we manage to be more tolerant and have more restraint.”

Yasemin Inceoglu, professor at the Galatasaray University faculty of communication, on the other hand draws attention to the fact that the political climate in the country works against such constructive discussion on any subject. “While a group of researchers were trying to explain 'hatred' as an outcome of an emotion, creation, syndrome or mental abnormality, there is another popular definition in recent years where hatred is expressed more as the outcome of personalization, generalization and globalization of the issues. But we also witness where these hateful expressions converge with discrimination, and bias, and then result in hate crimes,” she told Al-Monitor. “What we witness with these black propagandas, lynching campaigns and hateful expressions is that these people target a group to pacify them, trivialize them and give them a message that they have no place in this society.”

Israel must have taken that message last week and decided to lower its diplomatic presence to a minimum in Turkey after a number of nerve-wracking protests in front of their missions in Istanbul and Ankara. These protests were loud, but not violent. But what was even more interesting is that the Turkish police allowed an al-Qaeda flag to be placed across the street from the Israeli ambassador’s residence in Ankara. Israel also issued a warning to its citizens not to travel to Turkey.

Hurriyet reported July 21 that there have been over 4,000 tourism cancelations since this announcement was made, and many more are expected to follow.

The way Levi came under the spotlight is therefore more telling about Turkey and the Turks than the Israeli operation in Gaza. Many from both the ruling and opposition party have condemned the smear campaign against Levi.

“We have a Turkish saying, ‘Every cloud has a silver lining.’ How true that is,” Levi told Al-Monitor. “I received an incredible amount of support. And I realized how much I am loved [here]. I also saw what a great, bright face this country has. This gives me inspiration to write even more. I know I am not alone here.” He added, “After all this, trust me, my take on this is not really all that negative. I am surrounded by so many loving people here.”

Indeed, there were hundreds and hundreds of tweets on social media July 24 teasing those who targeted Levi, questioning whether they have ever read a word in his books.