The author documents the aftermath of a barrel bomb attack on civilians in the Bustan al-Qasr neighborhood of Aleppo. 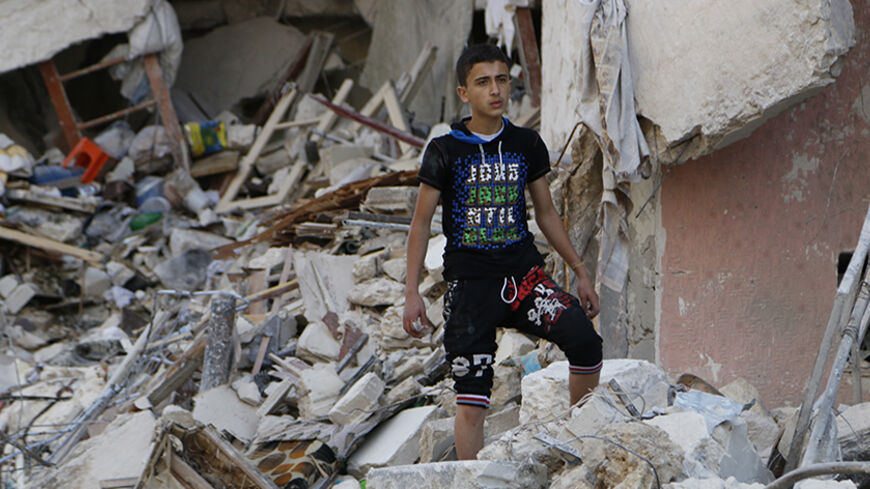 The scene of a barrel bombing on the Bustan al-Qasr neighborhood of Aleppo, June 7, 2014. - Mohammed al-Khatieb

ALEPPO, Syria — It’s 2 a.m. on June 7 and calm hangs over the neighborhood of Bustan al-Qasr. All the shops are closed. A few passersby walk the street; two, three, maybe five in total. Quiet reigns, except for the sound of a helicopter flying low to the ground, which is atypical during the day.

No one looked up to the sky, because the helicopter could not be seen while it circled. Maybe it was directly overhead or farther away.

Some inhabitants turned off all their lights, hoping to reduce the chance of being targeted. Others ignored the whole situation, having grown tired of all the security measures.

The helicopter’s rumble grew as it descended vertically. Suddenly, a young man yelled “ordnance released,” as the exploding barrel was heard whooshing toward the ground, growing louder as pedestrians scurried about. One man threw himself on the ground. Another ran away, while a third stood motionless. The whistling sound grew louder, followed by a young man’s cries of “Allahu Akbar,” right before the earth shook in a thunderous explosion.

The terror had ended. It took 20 seconds for the barrel to fall from the helicopter to the ground — 20 seconds when everybody thought the barrel would fall on their heads.

A man in the street examined himself, and, determining that he was still alive, continued toward his home, as the search for ground zero began. The intensity of the explosion meant that it occurred nearby, in the neighborhood of Bustan al-Qasr.

As a Suzuki pickup truck sped by carrying two wounded, the inhabitants asked the driver: “Where did it hit? Where did it land?” Without stopping, he replied, “The Sukkar Mosque.”

We arrived at the site, where the inhabitants gathered around the ruins of destroyed buildings. Everyone was in shock: One wore pajamas, another barely covered his body with a piece of cloth. The place was dark, and the people tried to illuminate it with handheld torches.

They began digging through the rubble in search of anyone who may be trapped. Minutes passed before members of the Civil Defense force arrived with the lone excavator they used in all targeted sites. 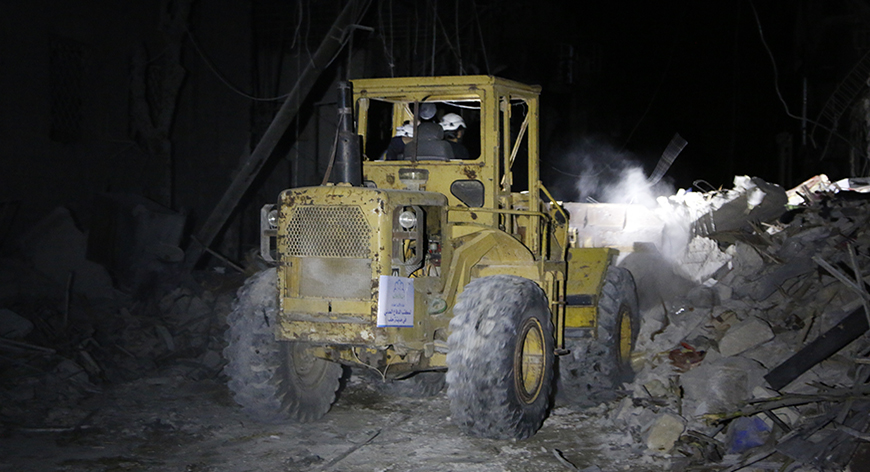 A man in his 40s, Abu Mohammed, whose relatives were trapped in the rubble, stood crying and screaming. He approached the devastated area and yelled at the top of his lungs, listening for a response from under the ruins. Everyone then went silent as Abu Mohammed heard a voice. “Someone is still alive,” he yelled, pointing to a location for the Civil Defense members to dig in, a place he thought was the bedroom.

Three hours later, four bodies were recovered. No one survived when the five-story building collapsed atop its occupants’ heads.

Abu Mohammed carried the body of a young girl pulled from the rubble. He seemed to know her well as he asked: “Why did you leave me? Where is your father? Where are your siblings? Please take me with you!” His imploring continued even as the child’s body was taken away.

On one side of the debris-strewn landscape, a mother held two of her dust-covered children while she waited, her eyes fixed on the people searching for survivors. After long hours of exhaustive work, and despite assurances by witnesses that people remained trapped under the rubble, the Civil Defense team left the scene, its members in desperate need of rest, having canvassed other areas targeted by death barrels throughout the “liberated” neighborhoods of the city.

The commander of the Civil Defense regiment in Aleppo, Khaled Hajjo, told Al-Monitor, “The night barrels increased the level of our suffering. There is no visible smoke or dust to point us in the right direction, and we cannot illuminate the area for fear of being targeted once again.” 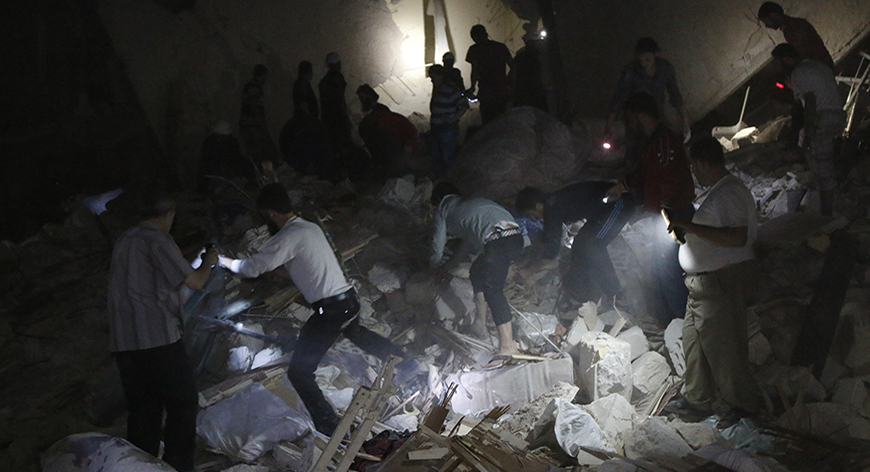 Residents dig through the leveled building in a search for survivors. (Mohammed al-Khatieb)

The following morning revealed the scale of the devastation: a five-story residential building leveled to the ground and all neighboring structures heavily damaged. The Civil Defense team returned to recover the victims. Three additional bodies were found, but, once again, the team had to leave because another barrel exploded in the Ferdous neighborhood, where casualties were said to be in the dozens.

This was the second week in a row that the Bustan neighborhood was targeted with nightly explosive barrel raids. This was the last safe haven for inhabitants of the “liberated” areas of Aleppo, having been previously spared the shelling suffered by other eastern neighborhoods during past months. But the intensive bombing campaign in the last few days has driven people to flee it as well, maybe toward Turkey, or smaller countryside villages.

Ali, a young man in his 20s, told Al-Monitor, “They want us to abandon our neighborhoods.” Then, yelling, he addressed his words to President Bashar al-Assad: “We will remain here and never leave.” Meanwhile, in the background, people carried their bags and left the neighborhood where their homes had been turned to rubble.

The explosive barrel campaign against Aleppo has been going on for the past six months, with dozens of people dead or wounded every day. Aircraft crisscross the skies unchallenged, for opposition forces lack the weapons to shoot them down. Not a single plane has been brought down in Aleppo since the campaign began on Dec. 15, 2013.

Although most of the city’s “liberated” neighborhoods have been abandoned by their inhabitants, statistics amassed by the Aleppo Martyrs site document, by name, the deaths of 1,606 people, among them 411 children, who died since the beginning of the campaign. Only 23 of them were opposition fighters.