The nonprofit organization Tamanna makes wishes come true for severely ill children in Lebanon, offering them and their families something to smile about and a respite from illness. 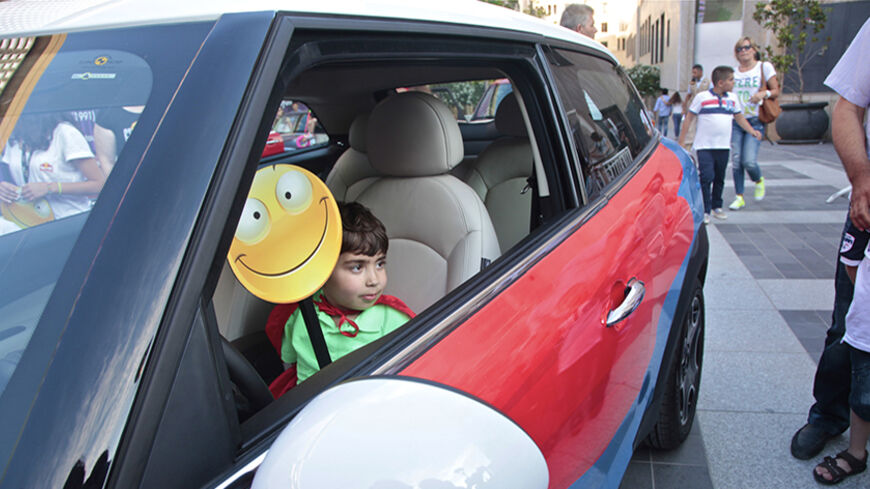 Hammoudi Jebawi, 9, sits in a Mini Cooper that has been transformed into a Superman-mobile during his make a wish surprise in downtown Beirut. - Melissa Tabeek

Hammoudi Zebawi, 9, suffers from an immune-deficiency disorder. On a Sunday afternoon, he walks with his parents through souks in downtown Beirut, the heart of the capital, unaware of what is about to happen.

Suddenly, a scene bigger than anything he has ever dreamed of comes alive before him. The Red Bull stuntman Zaher Ziadeh, dressed as Spider-Man, rappels down a building. Mini Coopers transformed into Spider-Man and Superman mobiles pull up after a crowd of children begin a flash mob performance, dancing in unison to Pharrell Williams’ “Happy.” More children run out holding up placards that read, “Be Happy Hammoudi!” Hammoudi, who loves Spider-Man and wished to be in an action movie, smiles, his face radiating the spirit of the people around him.

This scene is the work of the non-profit organization Tamanna, which means “make a wish” in Arabic. The organization was founded in 2005 in memory of Diala Fil’s 5-year-old son, Karim Rayess, who was killed in a tragic accident. Fil created the organization less than a year after his death. She saw it as a way to keep her son’s memory alive, by “turning other children’s tears into laughter,” said Soraya Barbir, managing director of Tamanna.

The small, mostly volunteer staff helps grant the wishes of children with critical illnesses, ranging from princess parties to massive gatherings like Hammoudi's Spider-Man-themed dream. Many wishes are not on the scale of Hammoudi’s, but the Tamanna staff helps bring imaginations to life for about three children each week.

“The problem is, most of these children come from an underprivileged background. They haven’t seen anything. … We try to get to the core of the child to see how to present the gift. It’s the whole experience that we offer them,” said Barbir.

Although the organization works with more than 15 hospitals throughout Lebanon, as well as a network of doctors who refer patients to it, the idea was initially dismissed. When Tamanna staff approached doctors and patients with the idea, the medical staffs were unconvinced of the usefulness of “having parties” when they could instead be paying for someone’s medication. They thought it was ridiculous.

“They didn’t get the importance of it,” says Barbir. “After a couple of months, doctors started realizing and seeing the difference we were making. With every wish that was granted, they started seeing the psychological impact on the children undergoing treatment.”

According to Barbir, once this happened, Tamanna became more established in the eyes of hospital staff. Doctors began calling them when they had a patient who was depressed or in need of a boost. With time, the organization evolved as well. At the start, the Tamanna only granted wishes in the form of a gift, but then the staff began creating experiences around the gift so it would have a more lasting effect.

The requirements for children selected are that they be between 3 and 18 years old, have a critical illness and are being treated in Lebanon. In a country rife with sectarian divides, Tamanna presents itself as a bridge to all children, regardless of religious or ethnic identity or socioeconomic status. Whether they are an Iraqi, a Syrian refugee or someone from a wealthy or poor Lebanese family, all qualify for wish granting.

Like the rest of the country, the Tamanna staff's work has been affected by the Syrian war next door and the resulting massive influx of refugees that has poured into Lebanon. The volume of the wishes of Syrian children with critical illnesses runs parallel to this. Whereas before, staff members had only a couple of Syrian children they were working with each month, suddenly they had 30.

“At one moment, I couldn’t fit in all the wishes here,” said Barbir, gesturing toward the whiteboard in their small office where progress on wishes is tracked. “They were flowing in from Syria.” Barbir described the state of many refugees as dire.

“They were coming in in a very bad state, the children. They were shocked by what was happening in their country, and very often, the quality of care was very bad. Some of them were getting treatments for cancer they didn’t have. They really were arriving on the verge of death,” Barbir said. “Thank God they were able to, some of them. Some of them we lost.”

Tamanna had earlier granted a wish to a 6-year-old Syrian girl from Aleppo named Nanor Eleyjian, who is being treated in Lebanon for leukemia. It was her dream to be a princess and have a laptop. While sitting in a bright pink dress in Beirut's Sanayeh Park with her family, Nanor got the opportunity to meet the stars of her favorite Lebanese television show, “Kazadoo,” as well as Hello Kitty.

Nanor’s family came to Lebanon March 25 to seek treatment for her shortly after they realized how sick she was and their inability to find proper care in Aleppo. Although Nanor’s parents were being helped to cover health-care costs — first by St. Jude’s Children’s Research Hospital but now by another nonprofit organization — Khatchtchig Eleyjian, Nanor’s father, says that he has gone into massive debt trying to keep up with the cost of living in Beirut as well as Nanor’s treatment.

At the end of the event for Nanor, the shy 6-year-old spoke about her favorite part of her wish. “I liked the whole (Kazadoo) team,” she said softly. Her father was happy, too. “It was good, very good,” he said with a smile that was not there when the family of five had arrived two hours earlier.

Given the emotional, physical and financial toll faced by a child with a critical illness and his or her family, the experiences that Tamanna creates become a significant part of their history. It is something they truly never forget.

Hammoudi certainly will not. Born and raised in Lebanon’s rural Bekaa, his wish far exceeded his family’s expectations, and the day is sure to bring him and them strength to face the challenges ahead. “He’s always feeling bad. It's made (Hammoudi) feel happier than he usually is, especially since he didn’t expect it,” says Abbas. “He won’t forget this.”