Politicians from both the right and the left are sympathizing with the families of the abducted youths in an unusual wave of empathy from the Israeli public toward the settlers at this moment of national distress. 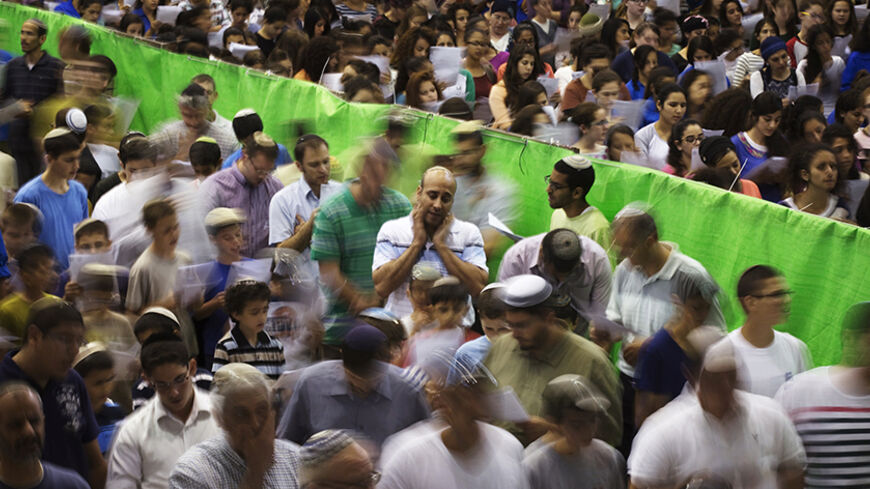 Israeli men and women, separated by a green divider, pray in the town of Elad, home of Eyal Yifrach, one of three missing teenagers, June 16, 2014. - REUTERS/Finbarr O'Reilly

An Israeli government minister who paid a visit this week to the family of one of the abducted West Bank teens told Al-Monitor that he can’t remember seeing such a wave of support for the settlers in years. A leader of the settler movement who accompanied the minister on his visit agreed, adding that the abduction of the three teens on June 12 has resulted in such widespread expressions of sympathy and support that he doesn't remember anything like it in the past.

The minister even expressed his concern that Prime Minister Benjamin Netanyahu might actually exploit the past few days' outpouring of support to even expand further the settlement enterprise in the occupied territories.

Throughout the first and second intifadas, there were many voices in the public discourse blaming the settlers for the series of terrorist attacks in Israel. The left regarded the settlements as an obstacle to peace; the right regarded them as an obstacle to war. On the left, authors, intellectuals, pundits and politicians took the position that Israel’s very domination of the territories was the main cause of Palestinian violence. For many Israelis, life beyond the Green Line was like living in another country. Time after time, surveys confirmed that most Israelis had never set foot in the territories and that many of them had never actually seen a settlement up close.

Then the three teenagers were abducted. It's hard to think of another event in the territories that has evoked so much sympathy among Israelis. Danny Dayan, the former head of the umbrella settlement organization the Yesha Council, told Al-Monitor that the brutal murder of the Fogel family (in March 2011, in the settlement of Itamar, two young Palestinians stabbed and shot the couple and three of their children to death) may have sparked a huge wave of support, but even that is a far cry from that surrounding the abduction of the boys.

“I can’t remember support similar to what is being shown to the families of the abductees,” said Dayan, who now heads the Yesha Council’s diplomatic campaign.

While spending time with the families in the Etzion settlement bloc, he ran into large groups of visitors who seemed completely new to the settlement experience, including members of kibbutzim aligned with the HaShomer HaTza’ir movement and groups of Israelis from across the political spectrum. For many, this was their first visit to the territories.

“I want to believe that this is really a welcome change in attitude toward us,” he said, trying hard to hide his surprise. “I have no doubt that since this is about the kidnapping of teens and because the parents are remaining so respectable in the face of their personal tragedy, it is hard for any Israeli to remain apathetic. I assume that people miss this kind of Israeli identity, this kind of restraint. I actually believe that rumors of hatred toward the settlers were premature.”

Politicians were also quick to catch this wave of legitimization. And not just politicians from the right visited the homes of the abducted boys’ families. There were also leftists, some of whom on a very rare crossing of the Green Line. Rallies in support of the abductees and their families took place throughout the country. The abduction of the three teens evoked a degree of public support that hasn’t been seen for years. This change contrasts inversely to public attitudes toward the settlers. A survey conducted at Ariel University shows a poor image of the settlers in the eyes of the Israeli public at large. The findings, published a few weeks ago, show that the hostility of the general public toward the settlers and the settlement enterprise has been rising steadily.

“I am aware of the extensive public support for the settlers that there is today,” acknowledged Gadi Blatiansky, chairman of the Geneva Initiative nongovernmental organization, in a conversation with Al-Monitor. “But I would say that this attitude has two stages. In the first stage, the settlers receive empathy from the general public and feel that 'We are all responsible for one another,' [a Jewish traditional rule of life often quoted as a sign of Jewish peoplehood]. In the second stage, however, once the abduction episode is over, people will start asking themselves uncomfortable questions, like, 'What are we doing there, and is the price we are paying worth it?'”

Blatiansky and the members of the Geneva Initiative group have been working for years to instill the principles of a two-state solution among the general public. Recently, he has begun to feel that the public has grown tired of sacrificing resources for the benefit of the settlement enterprise. That is, until the abduction, of course, which gives the impression that the wheel is turning back.

“I feel that an uncompromising political struggle is being waged by the settlement leaders to exploit the abduction to shift public opinion,” he said, adding, “At this stage, it is taking place aggressively in the social networks. They write down everyone who came to visit and especially everyone who didn’t pay a visit. They give grades to those who showed warmth to the families of the abductees and those who sat on the sidelines without saying a word. I can only express my hopes that when this dark cloud passes, the trend that existed before the abduction returns.”