Most Israeli security officials wonder how much longer Jordan can cope with the threats on its other borders. 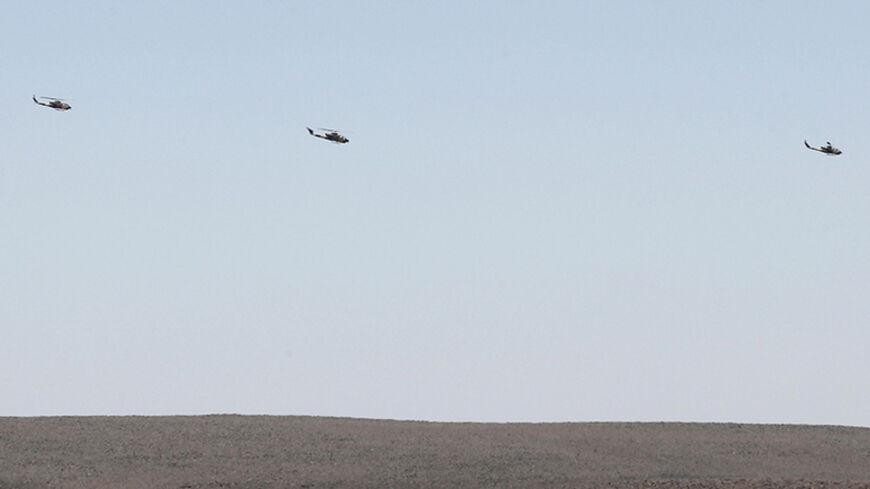 AQABA, Jordan — The southern border crossing between Israel and Jordan is named after Yitzhak Rabin, the late Israeli prime minister who signed the historic peace treaties between these two countries some 20 years ago. A short, five-minute taxi drive from Eilat’s small airport and you’re there. Outside, the desert is gearing up for another searing summer of 40 degrees Celsius (104 degrees Fahrenheit).

To make the crossing on foot between the Israel and Jordanian sides, tourists pull out small metal luggage carts ornamented with Israeli and Jordanian flags that were manufactured specifically for the border crossing between these two countries. Once you pay the $25 exit fee from Israel, you are able to go through the crossing. On the Israeli side, passport control is quick, efficient and coolish. On the Jordanian side, the process is slow, sweaty but especially friendly. A big photo of the royal family awaits visitors at the entry point to Jordan. The late King Hussein with his son Abdullah II, the incumbent king, next to him, and on the right 18-year-old Hussein bin Abdullah, the crown prince. They are all sporting smiles. Welcome to Jordan.

For dozens of years Israelis had dreamed about this reality, gazing at it but unable to touch it. For thousands of nights, Aqaba’s lights glistened across from Eilat’s. Only 1 kilometer (0.62 mile) separates these two cities, both of which are perched, shoulder to shoulder, on the northern tip of the Red Sea. Sharing breathtaking sunrises and spectacular sunsets, they are nestled between towering mountain ridges above and rich and colorful schools of fish in the water in between. The Israeli-Jordanian peace treaty, signed in 1994, one year before Rabin's assassination, has transformed this dream into a reality. All that’s left to do is to enjoy the dividends of this peace. It seems to me that these dividends are being cashed in nowadays.

Having stood until a few years ago in the shadow of its more mature and developed sister city of Eilat, the city of Aqaba in Jordan is undergoing major development. In the heart of winter, Eilat's beaches attracted charter flights packed with European tourists coming to enjoy the desert sun and one of the richest and most colorful reefs of fish, dolphins and sharks that any ocean has to offer. Aqaba was left behind. No more. The small Jordanian city has become a bona fide tourist empire. Large hotels were built along its coastline and recreational facilities dot the roads leading to it and continue southbound. The number of tourists is steadily rising. The city is outgoing. The hotels are excellent and hospitality is above reproach.

This was my third vacation in Aqaba. The hotel Kempinski, one of the finer establishments there, is host to different types of patrons — the kind of which can only be found in the Middle East. Next to Arab women in burqas with only a narrow slit affording them a glimpse at the world, Israeli women in bikinis and European women in even skimpier bikinis were getting a tan, as were less conservative Arab women in longer swimsuits with headscarves and refined updos. They all got along excellently, enjoying everything nature, as well as their hosts, had to offer. Aqaba, located at the northern tip of the Red Sea where Israel and Jordan converge, is one of the few places where the hallmarks of true peace are evident these days.

Some 25 kilometers (15 miles) to the south, Jordan converges with Saudi Arabia. By and large, this is the same geographic square that shares a fascinating border triangle between Israel, Jordan and Saudi Arabia. On the other side of the Red Sea (which is very narrow at that point) is Egypt. These four countries are tightly clutched in a real strategic alliance. Not only do their borders converge but so do their interests. The moderate Sunni Saudi Arabia, Egypt and Jordan are concerned on the one hand by Shiite Iran and its nuclear arms race, as well as by the radical Sunnis embodied by the terrorist organization ISIS, on the other. As Israel's Foreign Minister Avigdor Liberman told Al-Monitor, Israel can provide solutions, answers and a strategic umbrella against both these threats.

While I was vacationing in Aqaba, a luxury jet bearing the emblem of the Saudi monarchy landed at Cairo’s international airport on June 20, with the Saudi monarch Abdullah bin Abdulaziz sitting, or more likely lying, onboard. Following complicated surgery in Morocco and perhaps on his deathbed, the monarch insisted on landing in Egypt. Abdel Fattah al-Sisi, Egypt’s president, arrived at the airport, boarded the plane and conferred with the monarch for about 40 minutes.

According to diplomatic sources, the objective of the meeting was simple, namely to show Saudi Arabia’s unwavering support of Egypt. “Go on your way, we are with you,” Abdullah told Sisi. Such a statement carries enormous significance in this sensitive and volatile situation in the Middle East. The Saudis, together with a few other oil emirates, are fighting tooth and nail to prop up the Egyptian economy. The “counter-revolution” led by the military and Sisi against the Muslim Brotherhood about a year ago prompted the Americans to make one of their typical mistakes stemming from a basic lack of understanding of the region and the situation:

They distanced themselves from Egypt at its most dire moment. Day in, day out, Sisi has to feed 88 million hungry mouths. If he doesn’t, he’ll be booted out, too. At the same time, Egypt, Saudi Arabia, the Gulf states, Morocco, Tunisia and many other countries need to continue coping with al-Qaeda-sponsored radical Sunni terrorism that poses a threat to those regimes, tearing apart the countries of the region at breakneck speed. The ailing Saudi monarch insisted this week on making a statement about the strong and unwavering alliance between his country and Egypt. And now, by way of comical relief, US Secretary of State John Kerry has arrived in the Middle East for a visit. I read in some newspaper headline that Kerry was arriving to “formulate a policy.” It’s certainly about time.

But not everything is as rosy and optimistic as I described above. There are other border crossings apart from the Israeli-Jordanian-Saudi border triangle (with Egypt’s not being too far away), and they are on fire. Earlier this week it was reported that ISIS-affiliated terrorist groups seized, among other things, an Iraqi-Jordanian border crossing. This is very bad news that further undermines the self-confidence of the region’s sane countries, as well as their feeling that the situation is still under control. Jordan is currently home to millions of refugees. Some 1,300,000 of them come from Syria and their numbers just keep rising by the day. Additionally, there are about half a million refugees from Iraq. This is on top of the fact that Jordan itself is made up of a population that is largely old-time Palestinian refugees.

A high-ranking Israeli security official with whom I talked earlier this week surprised me. In contrast to other assessments, he said, we believe that Jordan demonstrates great resolve and strength in handling the situation. We are awed by its ability to cope with the hardships and provide solutions. This consists not only of a military force and quality intelligence but also of the monarchy’s wisdom and its ability to cause the masses to empathize and feel that the regime is attentive to their plights. To my mind, Jordan is stable and coping with the threats optimally.

In my opinion, this assessment is shared only by a handful in Israel’s defense establishment, which continues to look to the east with concern, waiting nervously for the day when Jordan starts showing initial signs of destabilization. Being Israel’s logistical home front, Jordan serves as a buffer and a security zone between it and the raging madness in the east. Over the next few months, it will become clear which one has the upper hand: whether it will be the peace that still exists on the southern border or whether it will be the war and madness that spill over from the northern border crossings. We should all say a prayer that the former will prevail.