In an interview with Al-Monitor, former Iraqi Prime Minister Ayad Allawi says that the Iraqi army "has lost its identity and its role" as a result of the current Iraqi government's policies. 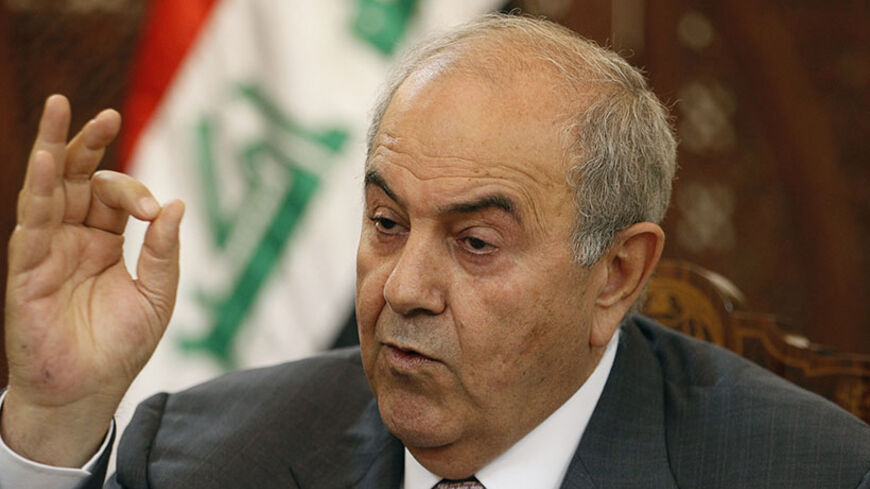 BAGHDAD — Ayad Allawi, the former Iraqi prime minister and leader of the Iraqi Nationalist ("Wataniya") Party, blamed the Iraqi government for policies that have allowed it to be "defeated by a bunch of dwarfs and killers as it sought outsiders’ help," instead of drawing on the "strength from its honorable people, from the tribes, army officers, dignitaries and politicians."

Allawi, in an interview with Al-Monitor via telephone and email from Amman, said that protests in Anbar province "have been met with repression and intimidation instead of [the government] adopting some of their demands by dealing with them morally and through a national dialogue." He described the protests as "initially peaceful, constitutional."

The former prime minister, whose party gained 21 seats in the Council of Representatives during the April 30 elections, said US policy in Iraq is "without a compass" while Russian influence is growing, "a crescent stretching from the Crimea [Peninsula] and the Black Sea through Iran, Iraq, Syria and part of Lebanon."

Al-Monitor:  You suggested a road map to resolve the current crisis. What is this map?

Allawi:  The problem doesn’t lie in just putting in new faces, although this is important. Perhaps more important, regarding how to get out of the impasse and the causes that led to it, is this map, which employs two axes: goals and mechanisms.

The essence of the goals are an inclusive political process without discrimination, quotas, exclusion or elimination — except for terrorists and those who steal public money; then achieving national reconciliation immediately; then building the institutions of a state that is professional and able to perform its duties away from regionalism, starting with internal security, the armed forces and the judiciary and its institutions.

The mechanisms are about the leaders — who played a role in confronting dictatorship and who laid the tasks of the democratic experiment — coming together and agreeing on forming a national unity government with genuine participation, and that is committed to the road map and that is composed of key leaders in the country, except for maybe some technocrats.

Al-Monitor:  Do you think that political solutions can end the crisis, given that the reality of the situation indicates that there are fighters of the Islamic State of Iraq and al-Sham (ISIS) in all Sunni cities?

Allawi:  The basis of the solution is only political. When the political climate changes into a unified climate for society without discrimination, exclusion or intimidation, then this climate will repel terrorism, and then, certainly all guns will turn against the terrorists. Al-Qaeda and its extensions are present in all Iraqi cities, starting from Baghdad. And al-Qaeda and its extensions, such as ISIS, are the result of the toxic political climate in Iraq. In addition, there’s the administrative and governmental vacuum left by the occupation and the effects of the region on the Iraqi scene.

Allawi:  That’s supposed to be the work of the authority and the government, which was defeated by a bunch of dwarfs and killers as it sought outsiders’ help and drew strength from outsiders instead of drawing strength from its honorable people, from the tribes, army officers, dignitaries and politicians, who have been targeted by the regime since the start of the protests in February 2011 till now.

(Those protests) have been met with repression and intimidation instead of (the government) adopting some of their demands by dealing with them morally and through a national dialogue, especially since the (protests) were initially peaceful, constitutional and had (certain demands).

Al-Monitor:  Honestly speaking, do you think that Iraq is heading to partition? If this was a genuine possibility, who exactly is pushing for partition today?

Allawi:  Frankly, Iraq has been socially partitioned, and administratively, in some of its areas. It seems to me that the conspiracy has continued and deepened. … Those pushing for partition are those who Lebanonized Iraq (by having quotas) and then Syrianized Iraq (through militias and terrorism).

Al-Monitor:  Who do you think is the political figure that can lead (the country out of the) the crisis? Do you think there is a specific name who, in your point of view, can play this role in case he presided over the government?

Allawi:  Any figure who is committed to the road map and who is part of a working team and in full partnership. If we want to save the country, “going it alone,” as is now the case, should be completely eliminated. And when the government is a government of leaders and has a clear road map, then no prime minister will dare dominate, bribe or draw strength from external forces.

Al-Monitor:  What do you think of US policy on the crisis and the rejection of military intervention? How do you read Washington’s point of view?

Allawi:  For a while now, US policy has been without compass and sailed in rough seas, which the United States helped make be rough — whether intentionally or unintentionally, the result is the same. Washington is now talking about national reconciliation and genuine partnership and not marginalization. At first, the United States supported everything except this. In fact, it did the opposite. The important and crucial 2010 election was further evidence of the US disarray, as is siding with Iran. US officials seem to have regretted that, according to their statements, but they do not have the same strength as when they were on the ground. Many now doubt [the United States’] abilities and whether it has a clear orientation. Military intervention is not the solution.

Al-Monitor:  Is this a regional conspiracy, specifically one by the Gulf and Saudi Arabia, as Prime Minister Nouri al-Maliki believes? Or is it an Iranian conspiracy, as some Sunni politicians think? Or is it not a conspiracy at all?

Allawi:  I don’t know if this is a conspiracy by the countries you mentioned. But certainly Iran has and is intervening, and it is openly saying it. I don’t know about Saudi Arabia, but through my experience with it when I was prime minister, [Saudi Arabia] really cared about Iraq. But yes, other countries have pushed and are still pushing toward Lebanonizing and Syrianizing Iraq. Moreover, the conflict, or let’s say what’s happening at the global level, is the beginning of a new cold war.

If we examine Russia’s influence map, we see a crescent stretching from the Crimea [Peninsula] and the Black Sea through Iran, Iraq, Syria and part of Lebanon. This Russian area of influence may expand. In summary, conspiracies don’t have to be direct. Perhaps, to achieve certain goals, some things may fall off the side of the road to achieve these goals … just as a doctor treats a patient suffering from an elusive disease. The (treatment may cause other damage). I think that the weak Iraqi rule may have turned Iraq into a goal in the regional and international conflict.

Al-Monitor:  According to your information, how do you describe the collapse of the Iraqi army in Mosul and other cities? Do you think this army can recover? What do think of the recent proliferation of militias?

Allawi:  The valiant Iraqi army has nothing to fight for. This brave army has lost its identity and its role. It doesn’t know whether it is fighting for the country or fighting for the sect or for the person or for the party. Will it fight the people? Is it a tool in the internal conflict or a tool to protect the homeland? In my humble opinion, this is why the army was reluctant or failed to fight.