The international men's volleyball league match between Brazil and Iran brought Iranians out to protest the ban on women spectating in stadiums. 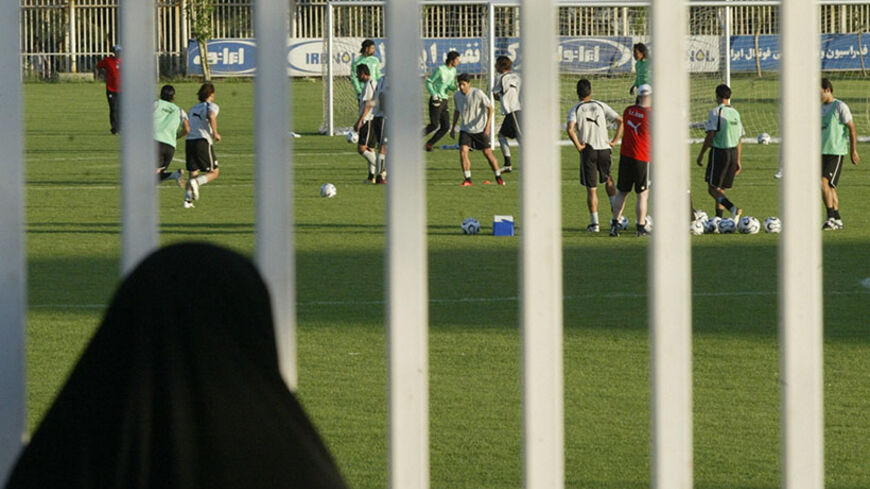 An Iranian woman watches a training session of Iran's national football team from behind a fence as females were not allowed to enter the stadium at Tehran's Azadi (Freedom) sport complex, May 22, 2006. - BEHROUZ MEHRI/AFP/Getty Images
Arash Karami
@@thekarami
June 16, 2014

Brazil’s national volleyball team beat Iran 3-2 at Tehran’s Azadi stadium June 15 in the FIVB Volleyball Men’s World League. However, what made headlines in the Iranian traditional and social media is the gathering of activists and fans against the ban on women entering the stadiums. The unfairness of the rule was thrown into particularly stark relief as Brazilian women with Brazilian passports were allowed to enter to watch the match.

Among the more than 50 protesters were well known activists Jila Baniyaghoob and Atefeh Nabavi, who stood outside the stadium with Iranian flags. Other Iranians wrote on the FIVB International Volleyball Federation's Facebook page that Iranian women were not allowed to attend.

In an editorial headlined “Is the blood of Brazilian women more colorful than Iranian women?” Iranian Students’ News Agency (ISNA) condemned the ban.

“Until now, no positive answer has been given [other than] reasons such as there being an inappropriate cultural atmosphere in the stadiums or the lack of observance and protection of moral norms,” the ISNA article read. A reason often cited for the continuation of the ban on women in stadiums is that chants and slogans and general banter inside the stadium by men can become inappropriate.

“What makes this more bitter,” went the article, “is that while Brazilian women go to the stadium with an easy mind to support their national team, Iranian women are stopped behind the gates of the stadium. Apparently a Brazilian passport has more credibility than an Iranian identity in our own land.

“Although this administration and some other previous administrations have made efforts [to promote] the presence of women in stadiums, and at times have spoken about making the right environment and conditions for this important discussion, unfortunately, this pursuit was sectional and did not have a positive outcome of providing the environment for the presence of women in stadiums. The protest yesterday in front of Azadi stadium was a concrete example of this.

“The presence of women in stadiums is not hard,” the article read. “You should not deprive all women this social opportunity due to the violations of a few individuals and by claiming that the cultural environment in stadiums is not appropriate.”

The article concluded that the deputies in the President Hassan Rouhani administration and officials from the Sports Ministry should not make temporary efforts while the games are taking place and immediately forget the issue afterward.

According to ISNA, Shahindokht Mowlaverdi, Rouhani’s vice president for women and family affairs, criticized the ban. According to a transcript provided by Fararu, she said, “At the cabinet meeting I addressed the ban on women for volleyball matches and stated the protests and hopelessness of the young generation on this issue. Especially since apparently, there was no limitations for previous rounds for women, the creation of limitations under the administration of ‘hope and prudence’ is surprising.” According to ISNA, she also said, “The police and security institutions should understand the costs and benefits of the presence of women and the wave of happiness that reaches families and societies, and provide the opportunity for the presence of women and the security of stadiums.” She added that her department would be willing to cooperate with security officials to create this environment.

The ban on women at volleyball matches was announced in 2012. There appears to have been a lax period in which women were allowed to attend some games, but the ban was recently reinstated. Women have always been banned from attending soccer matches.