Iranian stores have been issued a warning about selling stationery to children picturing popular Western cartoon figures such as Spider-Man and those in "Toy Story." 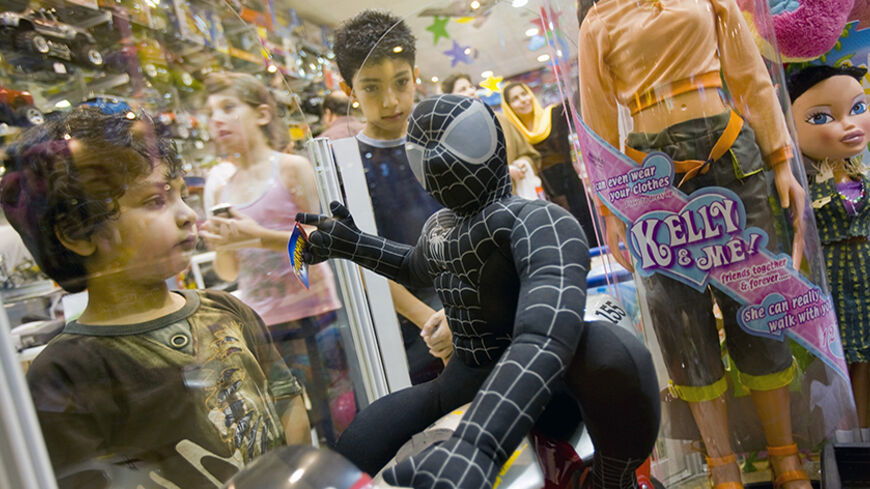 Iranian boys check out a Spider-Man toy at a shopping center on the island of Kish in the Persian Gulf, 1,250 kilometers (777 miles) south of Tehran, Aug. 4, 2008. - REUTERS/Morteza Nikoubazl

The Organization for Supporting Manufacturers and Consumers, an Iranian governmental organization, issued a memorandum on June 4, announcing plans for enforcing bans on the supply and sale of school supplies and stationery “picturing demoralizing images.” The memorandum, issued in time for the arrival of Iran’s national soccer team to participate in the World Cup in Brazil, warns store managers against supplying such stationery, and warns consumers against purchasing these products. The “demoralizing images” are generally logos and names of different Western soccer teams; names of players and countries in Latin characters; Western brand names spelled out and pictures of Disney cartoon characters — popular figures such as Spider-Man, SpongeBob SquarePants, Winnie the Pooh, Sleeping Beauty, Snow White and the Seven Dwarfs, Barbie and "Toy Story" heroes.

Conservatives refer to such characters as immoral, obscene symbols of loose Hollywood culture, and a bad influence on kids and teens that distances them from Islamic and Iranian principles. The memorandum adds that failure to obey this new regulation will have serious negative consequences, possibly ending in prosecution for both merchants and consumers.

In a phone interview, Arash, who owns a stationery store in western Tehran, told Al-Monitor that he has received the memo and that the “morality police” has sent two guards to his store giving him a deadline of 24 hours to remove all graphic stationery from his store. He has begrudgingly done so.

Arash said: “Since this happened five days ago, I have barely had any customers. I have regulars because my store is in such a secluded area and practically in a cul-de-sac. People are scared, and understandably so.”

Traditionally, the Ministry of Education donates school supplies — mostly to needy students — at the beginning of the Iranian school year, in late September.

The pressure to replace foreign-fabricated (usually Chinese-made) stationery with supplies made in Iran — because of what is announced as “immoral representatives of obscene Western culture” — has increased over the past seven days, since the donation of school supplies will take place again a few months from now. Warnings have increased regarding the kind of supplies that will be donated to students.

The deputy minister of education has been widely and harshly criticized by hard-liners for giving out school supplies of which some featured Disney cartoon characters. Ever since, conservative pundits and websites have not stopped complaining about this and have not become — even slightly — less critical that “not all donated supplies were made in Iran, and most of them were un-Islamic.”

Melika, 11, who goes to public school in Zanjan, told Al-Monitor that some of her teachers have warned against school supplies with graphic designs, and that the assistant principal confiscated her backpack during the final week of the school year. In a phone interview, Melika said: “They called many of us to the principal’s office and asked us to buy new backpacks for the few remaining weeks or days of the school year.”

The campaign that hard-liners started in 2013 was a lead for the Ministry of Education and Ministry of Commerce, targeting restrictions and bans that are now being enforced.

Critics refer to school supplies bearing images of Donald Duck, Mickey Mouse, Shrek and the likes as “satanic stationery” that needs to be eliminated entirely from the market.

Vida, the principal of a private high school in the city of Rasht, northern Iran, told Al-Monitor that she has not been notified of any restrictions regarding backpacks and stationery. In a phone interview, she said: “I am certainly aware of it as a general new rule that needs to be enforced, but there is not as much limitation in private schools since they are usually not as restricted as public schools are. The other difference is that these types of school supplies are mostly consumed by kids and tweens, more so than teenage high school students, so one would not expect to observe nearly as much limitation in high schools.”