US to Iran: No sanctions relief without nuclear transparency

US lawmakers are beginning to lay out their demands for a tough inspection regime in exchange for any sanctions relief. 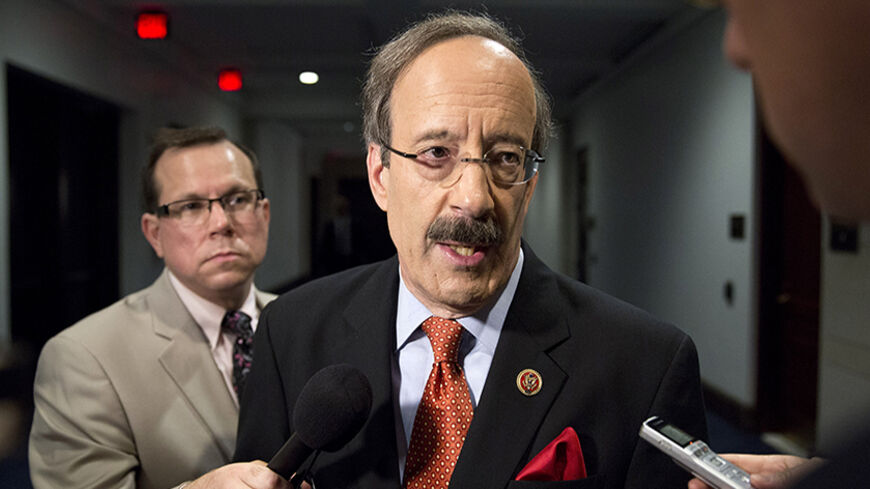 US Rep. Eliot Engel, D-N.Y., speaks to the media before attending a closed meeting for members of Congress on the situation in Syria at the US Capitol in Washington, Sept. 1, 2013. - REUTERS/Joshua Roberts

House members sent the White House a clear message on Tuesday that Congress won't "budge an inch" on sanctions on Iran unless the country comes clean about the suspected military dimensions of its nuclear program.

In the first in a series of hearings on the ongoing nuclear talks, key members of the House Foreign Affairs panel reiterated their demands that any final agreement contain strong verification procedures.

But they also insisted that Iran allow access to suspected military sites before lawmakers are asked to approve a final deal — or even a six-month extension of the current interim agreement beyond the July 20 deadline, should it prove necessary.

"Before we would ever consider the possibility of extending this interim agreement for another six-month period, certainly we should expect that the Iranians would at least be willing to grant that access to the areas where for more than a decade we've had these concerns," said Rep. Ted Deutch, D-Fla., the top Democrat on the Middle East and North Africa panel.

"At a bare minimum, Congress should be informed in a very detailed nature of whatever talks have taken place surrounding that issue before we should be asked to budge an inch on any sanctions."

Committee chairman Ed Royce, R-Calif., embraced Deutch's concerns and invited him to a side conversation during the hearing, which was dedicated to verification of an Iran nuclear deal.

"This committee may soon be asked to judge a 'comprehensive agreement,'" Royce said in his opening statement. "Central to this would be evaluating the verification measures needed to ensure Iran can't cheat. What types of conditions should U.S. negotiators be demanding? What are the limits of verification?"

Royce went on to say that Iran's willingness to "come clean" on its past weapons program should be an "acid test" for negotiations.

"We must ask, what good is striking an agreement — and removing sanctions, our only leverage — if Iran keeps a capacity to secretly build nuclear bombs?"

Central to lawmakers' concerns is Iran's refusal to allow access to the Parchin military base, which is believed by some to be used as a covert nuclear weapons development site. The Joint Plan of Action (JPA) agreed to in November does not address Parchin, other than calling for the creation of a "joint commission" by Iran and the international negotiators of the P5+1 (the five permanent members of the UN Security Council plus Germany) that would work with the International Atomic Energy Agency (IAEA) "to facilitate resolution of past and present issues of concern."

"Given that we've been concerned about the military dimensions of the program for over a decade, we need to see something from Iran. And to date I'm not satisfied that we've seen it," Deutch told Al-Monitor after the hearing. "The focus now should be, between now and July 20, tell us how you're coming clean on the military infrastructure program."

Lawmakers have expressed those concerns previously.

Royce and Engel wrote a letter to President Barack Obama on Nov. 19, just days before the interim deal was signed, urging him to ensure that negotiations "guarantee IAEA inspectors unrestricted access to all of its nuclear sites."

"Iran has refused to allow inspectors access to the facility at Parchin, where research and development of a nuclear explosive device is suspected to have occurred," they wrote. "Iran’s decades of non-compliance with the IAEA and repeated use of covert facilities to hide its nuclear activities make it essential that it submit to the highest standard of international inspections and be forthcoming on its past activities."

"Such measures," the letter states, "should include an agreement granting the IAEA necessary access to inspect all suspect sites, including military facilities, and providing an unfettered ability to interview Iranian scientists and personnel associated with Iran’s nuclear program."

Witnesses at Tuesday's hearing also urged lawmakers to push back against any deal that provides a set time frame — be it five, 10 or 20 years — before Iran will be treated as a "normal" country with the same nuclear rights as any other country.

"If Iran complies with its obligations under the comprehensive solution for the agreed duration of that agreement, it becomes legally entitled to the same treatment in nuclear energy matters as Japan or Germany," said Stephen Rademaker, who served as assistant secretary of state for international security and nonproliferation under George W. Bush.

Rademaker testified that the provision represented a "giant get-out-of-jail-free card for Iran" and would allow them to gain the technology to rush to produce a nuclear weapon once the agreement expires.

Others insisted that Iran's ballistic missile program should also come under scrutiny as part of the deal, given the close ties between that technology and nuclear weapons.

"The scope of monitoring activities being carried out should be sufficiently broad as to facilitate detection and characterization of the full scope of Iranian nuclear weapons programs — not just the nuclear fuel cycle," testified John Lauder, a CIA veteran and current senior adviser to 20twenty Strategic Consulting. "The P5+1 should also begin to prepare the groundwork for a follow-up negotiation to constrain Iranian ballistic missile development."

The hearing highlighted the growing anxiety on Capitol Hill as July 20 approaches. Lawmakers of both parties are determined to have a say in a final deal, and not to allow the administration to strike a deal on its own.

As part of such a deal, Iran is likely to demand an "easing of all sanctions that address its oil and oil products exports, its use of the international financial system, and its receipt and repatriation of hard currency," according to a May report from the Congressional Research Service (CRS). "Sanctions addressed purely at human rights and Iranian foreign policy will probably not be candidates for easing in a comprehensive nuclear deal."

The CRS report points out that the interim agreement did not require congressional approval, relying instead on presidential waivers to the Iran Sanctions Act, National Defense Authorization Acts and other legislation. The president has the authority to waive many sanctions provisions for short periods of time for national security reasons — and may rely on that authority to lift sanctions against foreign banks that deal with Iran’s Central Bank, which aim to cut off the mechanisms oil importers use to pay Iran hard currency for oil.

"Iran is certain to require that this sanction no longer apply as part of a comprehensive nuclear deal," the CRS report states, "although Iran might be satisfied with non-application through repeated waivers rather than outright repeal of this sanction through congressional action."

A House aide said that chamber isn't preparing any new legislation ahead of the July 20 deadline. But lawmakers warned the White House not to act unilaterally.

"Everything [administration officials] have said to me is that Congress has to agree with this," ranking member Eliot Engel, D-N.Y., told Al-Monitor after the hearing. "That's what they told me. So I'm taking them at their word.

"I think it would be preposterous to not have Congress acquiese to any kind of a deal. I think that this is of such major importance that the only way a deal can be successful is if the administration and Congress are working together and both agree. The basis of the sanctions that were imposed by the Congress, and we have checks and balances, separation of powers. I feel strongly — as my colleagues on both sides of the aisle do — that Congress would need to be involved and would need to acquiesce," Engel said.

The Senate Foreign Relations follows suit with its own hearing on the Iran deal on Thursday.