The latest Freedom House report on press freedom will likely contribute to further tension in Turkey. 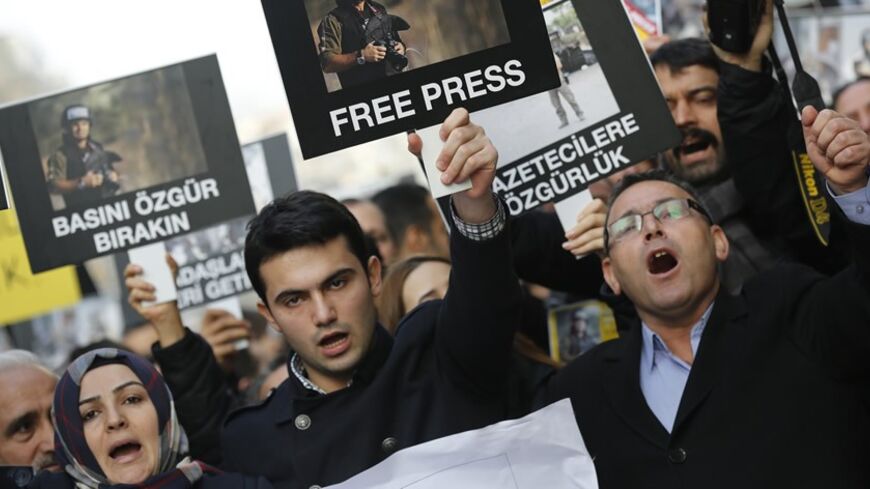 On May 1, Freedom House published its 2014 rankings, in which Turkish press freedom regressed from the "partly free" to the "not free" category. With the release coming just two days before World Press Freedom Day, Turkey's ruling Justice and Development Party (AKP) could not ignore the report's findings, which opened up a Pandora’s box of reaction from the government and its supporters.

Foreign Minister Ahmet Davutoglu’s words got the most attention: “Turkey allows all kinds of views to be openly expressed. In this respect, press freedom in Turkey is even freer than countries deemed to be 'partly free,' and it has deeper roots in terms of freedom than 'free' countries.” It was rather difficult for many observers to swallow his claim, but Davutoglu did not stop there. He continued, “The category that Freedom House puts Turkey in is not based on any objective information, which shows that the report is based on perception.”

To the amazement of his audience, he then said, “Our journalists should reject this report.” Social media reacted to Davutoglu’s comments with satire — “Not Zaytung [a Turkish online satire magazine similar to The Onion] just Davutoglu” — and many pundits considered the suggestion for “our journalists to reject the report” as an order from above. Two satirical lines were extensively circulated on social media sites: “Yes, we are free, after being fired” and “We are free to praise the government, there are no limits for that.”

On May 1, I asked a bureaucrat with strong links to the AKP what she thought of the report. She told me, “Well, think about it. Who is Freedom House? We do not think of Freedom House as independent; we think of it as American, and then you guys complain about the rise of anti-Americanism.” She asked me not reveal her name, because of her strong reply to my question. But it is odd, because since May 1 pro-AKP media outlets have been publishing pieces asking “What is Freedom House?” while indicating how the report is the doing of the US government. In one particular piece, the author states that “90% of the funding for Freedom House comes from the State Department.” Another media outlet said, “Look who is behind that ranking,” claiming that “the Israeli lobby and George Soros” were the main sponsors of Freedom House.

This is a crucial point that may need further explanation. For a decade, Turkish Prime Minister Recep Tayyip Erdogan and his associates have stated that if the owner of a media outlet is paying a journalist's salary, the journalist must write opinion pieces following a certain line if the owner requests; otherwise he or she must be discharged. The same applies to the “state-owned" Turkish Radio and Television Cooperation (TRT), which is not public radio or television in the eyes of the AKP elite but “state” media. It is difficult to convince Turks that providing funding does not mean dictating content. I recently failed to explain to college students in Turkey that having the government fund a nongovernmental organization does not necessarily make the organization the mouthpiece of the US administration. One student commented, “I think it is best that the US ambassador in Ankara prepare himself for more made-up 'news' about himself in the Turkish press, tit for tat, right?” So is the conclusion that Turkey's media are "not free" just the result of Freedom House's bias?

Interestingly, Reporters Without Borders has, since 2008, ranked Turkey significantly lower than Freedom House. The common trend during that time has been the gradual yet continuous drop in press freedom rankings for Turkey.

Despite all its bold claims, the AKP has failed to provide concrete evidence to challenge the conclusions that press freedom in Turkey has been regressing at an accelerated rate. Just a brief search in Al-Monitor’s Turkey Pulse provides dozens of stories of intimidation, mass firings, censorship, imprisonment, wiretapping and dangerous patterns of media ownership.

So how does the lack of press freedom affect socioeconomic stability in Turkey? One important factor is to acknowledge that there has been a regression. The current generation of journalists has lost some of its rights. This is different in comparison with never having enjoyed such rights. Losing political rights causes deep resentment in individuals. When we look at the rankings of various agencies, what we observe is a strong correlation between the lack of press freedom and poverty. The argument is that where the media are not free, foreign investment is scarce. Will this regression affect the Turkish economy? We will have to wait and see, but there are two categories where we can already observe the immediate consequences of a suffocated press: the Kurdish peace initiative and minority rights.

Harun Ercan, a scholar at Koc University, told Al-Monitor that the impact of the lack of press freedom is visible on at least three levels. Ercan explained, “First, Kurds have been protesting the construction of several police outposts since March 2013, and this is not reported in the mainstream media.” He said there is a gag order against any news of government actions that may be perceived as harmful to the peace process. He added, “Second, the crucial argument of the government — 'We mourn no more victims of terror' — is also used as a justification not to take the next step required for the peace process. Any journalist who creates controversy about this matter loses his job in the mainstream media.” Regarding the latter, Ercan commented, “The current official rhetoric is that times of war are over and will never be repeated. However, what has happened is not being discussed. Sweeping it under the rug and discrediting the contributions of Kurds in the process is not fair.” While the government's concern in protecting classified information for national security is understandable, the AKP has suffered serious leaks with regard to its Kurdish peace initiative.

In addition, minority rights suffer significantly when media is “not free.” By using the word "minority" in this context, I do not only mean the religious minorities in Turkey. My use of the term aims to cover groups that are different: the LGBT community, Alevis, Shiites, liberals, socialists, ultranationalists and anyone who may belong to the “opposition” in a political sense. All of these groups find “marginal” representation in the mainstream press, where they are mentioned only in reinforcement of age-old prejudices. The majority of the LGBT community's news coverage focuses on the "scare" factor with nothing "normal" ever being newsworthy. Examples of this differentiation can be multiplied, hence the opposition in Turkey is rendered mute.

The regression of freedom of the press rankings should be worrisome for all, but mostly for the Turkish government. Turkey has become a precarious republic with deep division lines between communities, with an underground and marginal press network where hard-working journalists keep producing for little or no financial return. Overall, we can safely conclude that the acknowledgement of lack of press freedom in Turkey will isolate the country further and generate more risks for its socioeconomic stability.

But yes, Davutoglu has a point. As long as one does not criticize the government, the Turkish press can be classified as rather free. When it comes to obscene images of women, the production of government-sanctioned news or praise of the establishment, press freedoms are infinite — just watch what way the wind is blowing, and one is free in Turkey.