The Islamic State of Iraq and al-Sham is forcing Syrian girls to marry its foreign fighters. 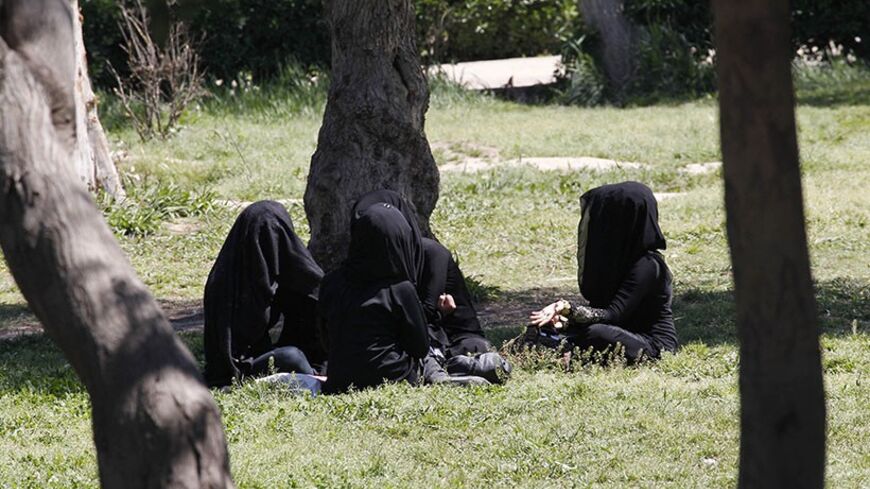 Veiled women sit as they chat in a garden in the northern province of Raqqa, March 31, 2014. The Islamic State of Iraq and al-Sham (ISIS) imposed sweeping restrictions, including a mandatory niqab, or full face veil, for women in public. - REUTERS

ISTANBUL — Following its establishment in Syria, the Islamic State of Iraq and al-Sham (ISIS), which has spread out over Raqqa, northern Aleppo and some of the border areas, has begun to attract young jihadists from around the world. The fighters have expropriated houses, land and cars to have the desired life in the "Islamic state." They have also married Syrian girls for various reasons.

Some parents are ready to give up everything they have to be close to the ISIS emirs, achieve material gains and have prestige and power. They offer their daughters to foreign fighters without asking the bride-to-be, according to prominent Raqqa activist Omar al-Huwaidi. Some girls — such as Fatima Abdulla al-Abou, 22, a university student from the al-Ojeil tribe in Salhabiya in Raqqa's countryside — categorically reject the practice. When her father tried to force her to marry a Tunisian immigrant on Feb. 2, she chose to die than to live with him. She committed suicide by poison, ending her life as a student who had worked halfway toward her degree.

Fatima escaped, in a way, the dark future that awaited her, but two other girls who married Tunisian jihadists did not. Huwaidi told Al-Monitor via a Skype interview that the two women were hospitalized in January after suffering barbaric physical abuse and maiming by their new husbands. Another activist in Raqqa, who wished to remain anonymous, told Al-Monitor, "We were shocked indeed when we heard about this inhuman behavior. We did not believe it at first, but we later found out that it really happened. We call for stopping this kind of marriage in any possible way."

Some ISIS emirs marry to further integrate into Syrian society and get closer to the clans in the areas they occupy, to acquire popular support. They ask to marry a girl and her parents often have no choice but to approve, without knowing the men's history and reputation, according to media reports. The ISIS fighters keep their identities and histories secret, and even their names are sometimes unclear or hidden under the pretext of security.

Activist Hammoud al-Moussa, from the city of Raqqa, told Al-Monitor that in some cases the groom asks for the permission of a father to marry his daughter without revealing his real name. Then the marriage takes place to avoid hostilities with the emirs. In most cases, the marriages are concluded using a pseudonym, and, according to Moussa, in 90% of the cases these marriages are secret affairs. Moussa added that the marriages involve nothing more than a verbal agreement.

There are no offices that document these cases, and there are no guarantees of the rights of women who marry foreign fighters. Should their husbands get killed, the women are left to their own devices.

Civil activists in Raqqa told Al-Monitor that the ISIS leadership also awarded houses to married emirs. It evacuated several displaced families from the scouts’ camp and replaced them with the new couples. Sometimes, the married emirs do not consider marriage the start of a family, but rather an opportunity for sexual relations.

Abu Jihad al-Halabi, a pseudonym for an activist in the city of Aleppo, told Al-Monitor via Skype, "Most of the marriages that we learned about did not last for more than two months. The husband either abandons the wife under the pretext of moving to a new battlefront, or divorces her and marries another woman."

“When the Free Syrian Army arrested one of the ISIS emirs during the last battles in the countryside of Aleppo, they found a large number of marriage contracts in his car,” he added.

In al-Dana in Idlib, Mohamed Hussein, an activist who conducted research on this subject, told Al-Monitor that a large proportion of these marriages end in divorce after two months, at which time the foreign fighters marry another woman. Sexual relations under the appropriately sanctioned institution of marriage is their main concern. “We found with one of the 'immigrants' who got caught, a notebook in which he had written military and first aid lessons, in addition to his reflections and prayers. He prayed to God to marry a good Syrian girl,” Hussein said.

“All the 'immigrants' who come to the medical center in the countryside of Latakia insist that the female doctors marry them. These doctors say they are engaged, and the fighters insist on being introduced to other Syrian girls,” he added.

Hussein recounted a wealthy Libyan who was kidnapped by jihadists seeking assistance in marriage. “He told us that he came to Syria with the intention to help out Syrian families by donating money. But upon his arrival, ISIS captured him and kept him hostage until he paid a sum of 5,000 euros [$6,928] to help a Libyan jihadist fighter get married. When he asked the jihadist about his wife residing in Libya, the latter answered, 'This is her punishment because she refused to come with me to wage jihad in Syria.'”

Until this date, Raqqa remains under ISIS control and out of the Syrian regime’s hands. ISIS is currently the strongest faction in town and has taken upon itself to kill opposition forces and activists and fight the regime. Every day that passes witnesses another ISIS execution, the cutting off of hands or crucifixion of Raqqa residents.