Iran’s pursuit of sanctions relief as a result of nuclear negotiations would allow it to pursue economic ties with the West while continuing to rely on Russia for its defense and nuclear needs. 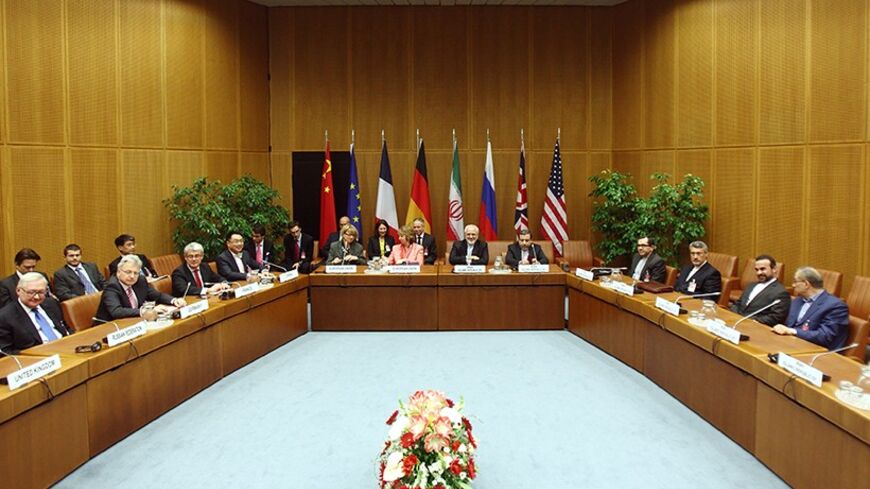 Tehran — During the early days of the revolution, the Islamic Republic of Iran aimed to chart a course that was “neither East nor West.” It was a concept borrowed from a popular slogan of its founder and former supreme leader, Ayatollah Ruhollah Khomeini. Thirty-five years later, however, Iran appears to be pursuing a “not only East, but also West” approach.

The likelihood of reaching a comprehensive nuclear deal with the West this summer raises the question of how Iran will behave toward Russia (a years-long partner, albeit a shaky one, in the oil, gas, nuclear and defense spheres) and the United States (a potential partner that has led the international effort to isolate, contain and sanction Iran, but is increasingly in conflict with Russia).

In regard to Ahmadinejad seeking better relations with the West, Raisdana noted that the populist president’s policies were “all in accordance with the International Monetary Fund.” Even in his final months, Ahmadinejad called for closer ties to the United States. The main difference between Ahmadinejad and pro-reform presidents, he noted, is the domestic partners they chose. “Ahmadinejad was inclined to pick people with military ties, while Rouhani has his own, nonmilitary circles.”

In a January address to the World Economic Forum in Davos, Rouhani spoke about ending three decades of hostility between America and Iran, inviting international companies to “seize opportunities” in Iran. Some Western media reported that the presence in Davos of Bijan Zangeneh, the Iranian oil minister and a high-profile pro-reform figure, was a clear sign of Rouhani’s eagerness to get international investors to Iran.

Last month, Mohammad Reza Nematzadeh, another influential minister in Rouhani’s administration, reassured Western nations that his country could be a “reliable, secure, long-term” supplier of gas to them, signaling that Tehran will be more trustworthy than Russia, a major gas supplier to Europe and a rival to Iran currently experiencing tensions with the West over the political crisis in Ukraine and its ability to potentially halt gas supplies to Europe. Of interest, the editor of Kayhan newspaper, Hossein Shariatmadari, who has close ties to the supreme leader, Ayatollah Ali Khamenei, criticized the suggestion of replacing an ally such as Russia.

In fact, Iran’s efforts to boost economic ties with Europe and resume relations with the United States, seen as a “threat” by some in Tehran, could be a strategic move that enables Iran to not only benefit from Western know-how, but to also maximize the costs of any possible aggressions by an outsider — for example, Israel or the United States itself, which have repeatedly threatened to keep the war option on the table if Iran fails to address their concerns in negotiations. So, the more Iran can get Washington and its allies involved in its economy, the less it has to worry about a security threat from the outside. This strategy, of course, is a potential two-way street, as the United States could also benefit from close ties with Iran. Everything is contingent on signing a final nuclear deal that will lift sanctions and allow Tehran to approach international companies.

Better economic relations with the United States actually depends on good relations with Russia, which is a member of the P5+1 group and whose support for a deal is essential for removing sanctions. Moscow's support has been instrumental in providing technology to Iran to build its sole nuclear power plant in the southern city of Bushehr. Moscow has now been contracted to build two more. Russian military technology and arms have also helped sustain Iran’s defense system over the past three decades while Tehran was been under sanctions.

In their latest effort to improve trade ties, Iranian and Russian officials discussed a controversial contract that would allow Moscow to receive up to 500,000 barrels a day of Iranian oil in exchange for Russian goods that Iran needs. The White House warned that the contract might violate the terms of the Joint Plant of Action interim deal that Iran and the P5+1 reached in November. Given Iran's economic ambitions and its fragile ties with the West, it is unlikely that Rouhani will act on one opportunity and leave the other. He needs both the United States and Russia beside Iran. Five years ago, when Rouhani headed the Center for Strategic Research, he told a panel of Iran-Russia experts that Iran would never turn against Russia even if it reconciled with the West. He is still of this opinion.

Raisdana said that Rouhani is acting pragmatically. Rouhani, he said, seems to have adopted a policy of “not only East, but also West,” moving away from the revolutionary policy of “neither East nor West.” He emphasized that Rouhani's administration would “remain loyal to Russia” as long as Moscow adheres to its “capitalist-oriented performance.”

Russia, however, has not always behaved as a reliable partner over the past decades although it has backed the Islamic Republic on human rights and the nuclear issue. Ayatollah Salman Safavi, brother of Rahim Safavi, a military adviser to Ayatollah Khamenei, believes that Russia has abused Iran in a number of instances. “The lack of balance in Iran’s foreign policy has provided Russia with an opportunity to build its relations with Tehran solely based on its own interests, not on mutual interests,” he wrote in an October op-ed on the International Peace Studies Center website, which he runs.

Nevertheless, Tehran will be unlikely to distance itself from Moscow even if it reaches a deal with Washington, because the Iran-Russia relationship has never been closer. In addition, said Raisdana, circles in charge of defense affairs, which act independently of the president, will not allow the administration to approach the United States at the expense of losing access to Eastern military technology. Instead, the Rouhani administration is, for now, only allowed to invite US and European investors to develop those sectors in which Russia and China have not competed against the West, such as the automotive, home appliances, mining and knowledge-based industries, he said.