House Republicans unveiled a defense bill that calls for military agreements with Gulf Cooperation Council nations to deter Iran, although some are nervous that pressing for status of forces arrangements could backfire. 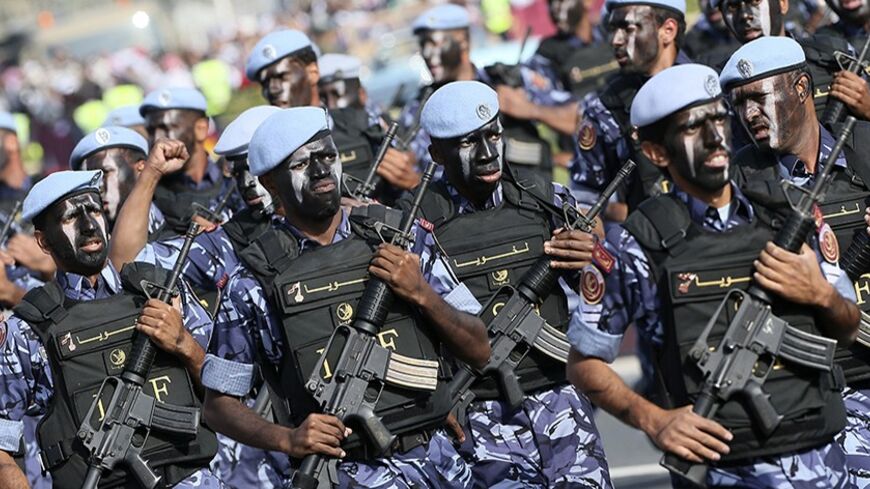 The House Armed Services Committee unveiled an annual defense bill this week that calls on the Obama administration to deter Iran by signing defense pacts with member nations of the Gulf Cooperation Council (GCC).

Section 1239 of the 2015 National Defense Authorization Act expresses the sense of Congress relating to the US "presence and cooperation in the Arabian Gulf region to deter Iran."

It recommends that the United States "maintain a robust forward presence and posture" in the region and "seek ways to support the security posture of GCC countries in the Arabian Gulf region to deter Iran."

"The United States does not have status of forces agreements and defense agreements with key GCC allies, which would support the defense of the Arabian Gulf region and would deter Iran," reads the bill, which will be marked up during a marathon session on Wednesday.

The United States, it says, "should seek to complete these agreements immediately."

The recommendation comes in the wake of mostly Republican criticism that the Obama administration has failed to ensure a continued US presence in Iraq and risks making the same mistake in Afghanistan.

The last US troops left Iraq at the end of 2011 after Iraq refused to extend a Status of Forces Agreement that would have granted US troops immunity from Iraqi courts — a development that defense bill author Buck McKeon, R-Calif., labeled a "tragedy" during an interview with Al-Monitor last year.

"You don’t have to be a prophet, all you have to do is look at a little bit of history,” McKeon said at the time. “We dropped the ball. We pulled everybody out. And now look. All of our efforts there are pretty much down the tubes."

The Congressional Research Service defines SOFAs as "multilateral or bilateral agreements that generally establish the framework under which US military personnel operate in a foreign country and how domestic laws of the foreign jurisdiction apply toward US personnel in that country." They do not have any "formal requirements concerning form, content, length, or title," but their main purpose is to determine who will exercise criminal jurisdiction over US personnel.

A Pentagon spokesman said the congressional SOFA push came as a surprise, but declined to comment on pending legislation.

The defense bill goes on to demand that US bases in the region be funded through the base budget instead of Oversees Contingency Operations funding, which is exempt from budgetary caps but is due to dry up as the war on terror winds down.

"The chairman's proposal reflects his belief that an enduring presence in the Middle East is vital, to include maintaining a robust forward presence and posture to support our allies [and] partners in the region and to deter Iran," the House Armed Services Committee said in a summary of the bill. "The mark expresses congressional concern that many vital bases are funded through OCO funding and not supported by status of forces agreements (SOFAs), and therefore urges the president to shift to an enduring posture in the Middle East and seek SOFA agreements with GCC states."

The Defense Department is tight-lipped about its bases in the GCC, which comprises Saudi Arabia, Qatar, Bahrain, Kuwait, Oman and the United Arab Emirates (UAE). The department has acknowledged the presence of Fifth Fleet headquarters in Bahrain, the Combined Air Operations Center at Al Udeid in Qatar and several bases — including Arifjan, Buehring and Patriot — in Kuwait, but is also widely known to operate many others in Oman, the UAE and other Iranian neighbors.

Some experts believe a SOFA push could backfire, however.

"Of course the effort to formalize this with Iraq led to our departure there in 2011. I’m not sure it’s worth running the same risk, or associating ourselves more formally with regimes some of which we don’t fully support in political terms given their lack of democracy," Michael O'Hanlon, director of research for the foreign policy program at the Brookings Institution, told Al-Monitor in an email interview. "If it’s just hortatory language I suppose it’s ok, but if it were binding and action-forcing, it could be a mistake in my eyes."

The defense bill also expresses the sense of Congress that any final nuclear deal with Iran address the "military dimensions" of its nuclear program. It says the Obama administration should "continue to put significant pressure on Iran’s network of organizations that conduct malign activities in the Arabian Gulf region" and around the world even as it pursues a nuclear deal, and calls on the United States and the rest of the world not to enter into contracts with people and entities that have violated sanctions laws regarding Iran.

The Senate is scheduled to mark up its defense authorization bill on May 20-21.