The throngs of Syrian voters in Beirut shocked the Lebanese political establishment. 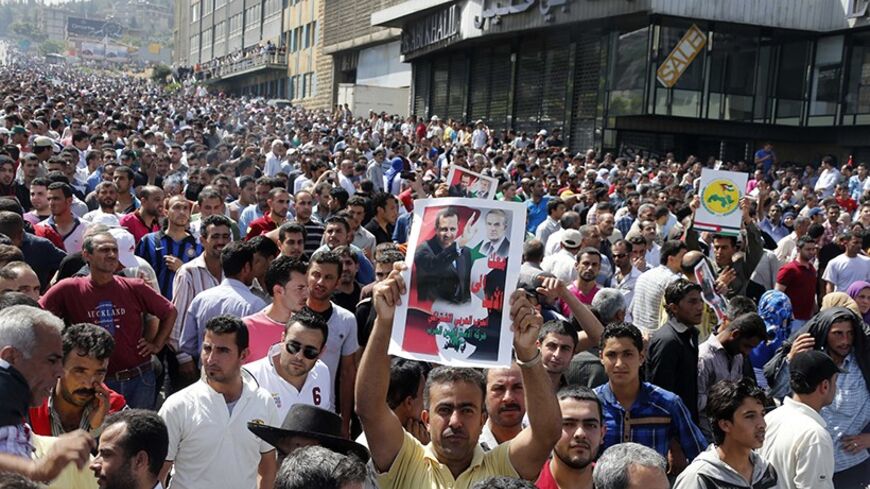 A Syrian national living in Beirut holds a picture of Syria's President Bashar al-Assad and his father, late President Hafez al-Assad, as Syrians gather to make their way to the Syrian Embassy in Beirut to cast their votes ahead of the June 3 presidential elections, May 28, 2014. - REUTERS/Mohamed Azakir

The scene in Beirut on May 28 was surreal. Throngs of Syrian refugees headed to the Syrian Embassy to cast their ballots in a scene beyond all description. The surprise was not only the manifestation of support for President Bashar al-Assad through banners and numbers that exceeded all expectations, but the political meaning, which possessed implications and dimensions surprising to everyone.

For the last two years, Syrian men, women and children could be seen roaming the streets of Lebanese cities and villages. Furthermore, the Lebanese and foreign media have continuously reported on the suffering of the Syrian people, with Lebanese politicians discussing the impact of the Syrian refugee wave on Lebanon’s security and economy. International institutions and global relief agencies have published report after report on the scope of the tragedy and its impact on Lebanon, where the number of Syrian refugees totals one-third of the population.

Despite all that, the May 28 scene came as a shock from which the Lebanese have yet to recover. The event took on dramatic proportions and overturned attitudes. It awoke the war demons and reopened unhealed wounds. It turned back the clock, as if the Lebanese civil war had never left this small country.

The first question that came to mind on May 28: Has Syrian tutelage returned? Has it returned through this show of force that resembled a military parade? Everyone was surprised how “Syrian voters” invaded the streets of Beirut. This was not a spontaneous event triggered by the Syrian presidential elections, rather, it was an “organized surprise” that sent multiple messages, including that the forces supporting the Assad regime are still present in Lebanon and are highly prepared.

Unlike in 1976, when Syrian tanks invaded Lebanon, the Syrians have returned through throngs of people — the exact opposite of what happened in the spring of 2005, when the masses of the Cedar Revolution swept Beirut demanding the withdrawal of Syria from Lebanon, a demand that was implemented in April of that year.

Another message of May 28: These forces, which are allied with the Assad regime through their organizational and tactical capabilities, can still change the power balance in Lebanon. This message may have been directed at those behind the recent Lebanese settlement that produced a government after 10 months of stalemate. It is known that this settlement — the fruit of a push by the International Support Group for Lebanon, i.e., Washington and Paris — happened on the sidelines of the ongoing dialogue with Iran, and was recently approved by Saudi Arabia.

What’s new in the matter is that Syria, in contrast to the tutelage era, had no hand in the settlement. The Syrian regime was busy in its war against the opposition as it seeks to change the power balance in its favor. Was the May 28 show of force a message by the Syrian regime that it not only succeeded in changing the power balance in Syria but can change it in Lebanon as well? Was it a message that all those who had bet on the decline of Syrian influence in Lebanon should reconsider their positions?

In a surreal scene, hoards headed to cast their ballots at the Syrian Embassy, just a short distance from the empty Lebanese presidential palace. Was the message that electing a Lebanese president cannot happen behind Damascus’ back, as was common in the recent past?

There is no doubt that the scenes of May 28 reshuffled the deck, which had already been recently reshuffled against the backdrop of the presidential battle. The scene angered enemies and embarrassed allies — some of them at least. The March 14 movement — which has long sympathized with refugees on humanitarian grounds and with the Syrian revolution on the basis that the enemy of an enemy is a friend — was surprised by the number of Syrians who support the regime. Although the March 14 movement knew the event was organized, it changed its position and started demanding that the Syrians loyal to Assad return home. Many March 14 supporters asked: If all those people support the regime, why are they in Lebanon? Why don’t they vote in the regions under regime control?

The scene might also have embarrassed the Aounist current, which had recently repositioned itself and opened channels of communication with former Prime Minister Saad Hariri, and thus indirectly with Saudi Arabia. Both Hariri and Saudi Arabia are at odds, or even in a state of enmity, with the Syrian regime. Yet the Aounist current, as it changed its alliances, hasn’t turned against the Syrian regime; it has defended the Syrian regime by portraying it as the defender of minorities and Christians. But May 28's throngs refuted the theory that the regime is protecting minorities. The ghosts of fear and worry have come back to haunt the Christians, and others as well.