The committee report for the Defense Authorization bill ties funding to American participation and data sharing. 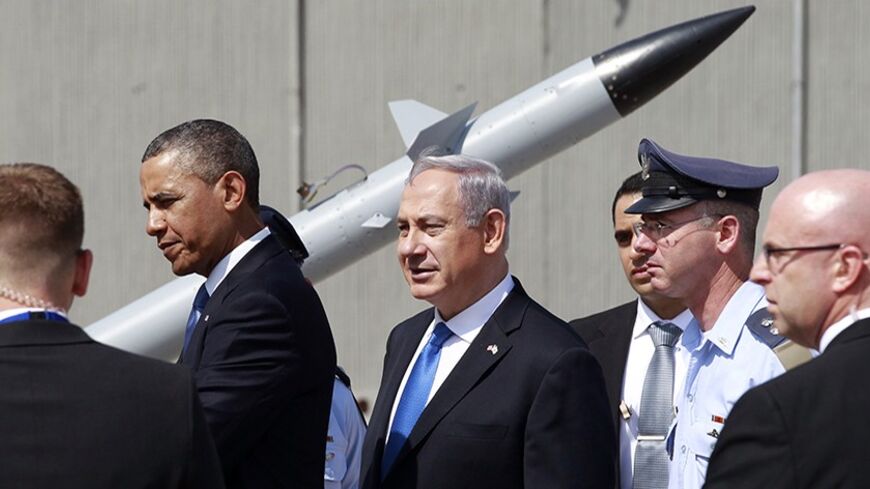 A little-noticed provision in the Defense Authorization bill that cleared the House on May 22 ties funding for Israel missile defense to increased participation by American firms.

The Armed Services Committee report accompanying the bill, however, conditions the extra funding to assurances that American defense firms get a slice of the action and that the US government gets technical know-how from the program, which has cost American taxpayers $720 million since 2011.

"Given the significant US taxpayer investment in this system, the committee believes that coproduction of parts and components should be done in a manner that will maximize US industry participation in interceptor and battery deliveries for Israel's defense needs," the report states. The report goes on to state that the Armed Services Committee "expects" the Pentagon's Missile Defense Agency to withhold the extra funding "until receipt and acceptance by the MDA of sufficiently detailed cost and schedule justification from the Government of Israel."

The report language is but the latest move in a long-standing effort by Congress and US arms makers to ensure the United States gets access to the Iron Dome market and its Israel-made technology. Last year's defense bill included initial funding to establish a US production facility and US arms maker Raytheon is set to start partnering with Iron Dome's Israeli maker, Rafael, this year for co-production of the battery's Tamir missiles.

The defense bill report requires that technical data for the program be shared with the Missile Defense Agency. And it puts the Obama administration on notice that if a further request for Iron Dome is made next year, the agency "must establish for the committee how those funds will resolve details and agreements needed for US-based coproduction of all-up-rounds (completely assembled missiles) and cover the export of Iron Dome technology to US and Israeli allies, including coproduction of parts, components, and all-up-rounds of those exports."

The House passed the defense bill on a 325-98 vote on the afternoon of May 22. Obama has threatened to veto the bill, in part because it doesn't call for closing the terrorist detention facility at Guantanamo Bay.

The nonbinding report language was added at the behest of the Armed Services Committee's leadership, a House aide told Al-Monitor. The office of chairman Buck McKeon, R-Calif., did not respond to a request for comment.

"There's always been some tension between Raytheon and Rafael," the aide said. The report aims to ensure that US funding for Iron Dome is "an investment, not a gift."

The committee report requires the Missile Defense Agency obtain a "detailed cost and schedule justification" from Israel before releasing the extra funding.

Such a report would have to include: "A timeline for Iron Dome expenditure of funds above the President's request for the fiscal year for which the funds were appropriated or made available; copies of signed and ratified contracts, subcontracts, and teaming arrangements between Israeli and US industry for all Iron Dome coproduction efforts; delivery to MDA of all technical data packages as accepted by US industry suppliers for coproduction; and a common cost model of Iron Dome components, to be jointly developed and agreed upon by MDA and IMDO that includes: recurring and non-recurring engineering costs; estimates for future buys and actual costs beginning with fiscal year 2013; the required quantities for all components through fiscal year 2019; and component lead-times and delivery schedules."

The aide added that part of the motivation was to make sure the cost of the program was justified. Israel has asked for more funding for the program, the aide said, in part citing the increased cost of producing parts for the system in the United States rather than Israel.

"Some of this language is ensuring that the Israelis are doing the accounting right," the aide said.

Defenders of close military ties with Israel have long called for a bigger role for US firms in the Iron Dome program, which proved its worth during the 2012 conflict with Hamas militants in Gaza.

Congress and the administration should "transform Iron Dome into a jointly owned and managed US-Israeli defense system," Gabriel Scheinmann, a visiting fellow with the pro-Israel Jewish Institute for National Security Affairs in Washington, wrote two years ago.

The administration shares that vision. "Any further US contributions on Iron Dome will be governed by a formal international agreement," Vice Adm. James Syring, the director of the Missile Defense Agency, testified before the Senate Appropriations Committee Defense subcommittee last year. "MDA is actively seeking Iron Dome coproduction opportunities for US defense industry. We are negotiating to obtain available technical data packages and data rights should there be a future US defense requirement for this weapon system."

The Missile Defense Agency declined to comment on the bill until it's signed into law. A spokesman however said a March 5 agreement between the Department of Defense and the Israeli Ministry of Defense regarding continued support for the program ensures US firms will have a role to play.

"It is a meaningful agreement, and very significant with regard to participation by US industry," MDA spokesman Richard Lehner told Al-Monitor.

The Armed Services Committee report said it was "pleased that this agreement resolves many details of US coproduction of Iron Dome components and interceptors in the United States." But it pointed out that the agreement doesn't cover the full amount the defense bill recommends for the Iron Dome program.

Pro-Israel sources argue the push for increased involvement by US firms can only benefit the Iron Dome partnership.

"From the Israeli side, it gives the United States a stake in continued production," a senior official at a pro-Israel group told Al-Monitor. "From the US side, it's a response to defense lobbies that want a piece of the action."