Although statistics from international organizations indicate that mental illness is on the rise in Iraq, social stigma prevents patients from getting treated and students from studying psychology and psychiatry. 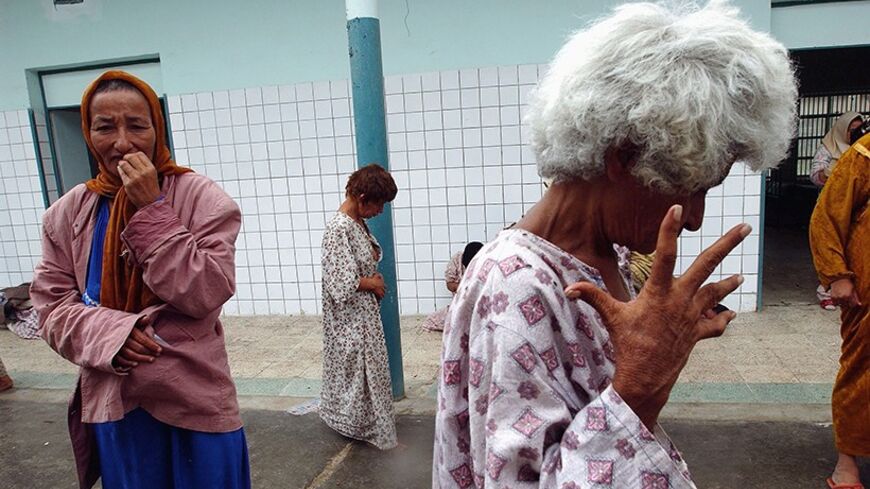 Women walk in a courtyard at a psychiatric hospital in Baghdad, Iraq, April 15, 2003. - Spencer Platt/Getty Images

According to statistics from Doctors Without Borders and the World Health Organization, Iraq has become home to psychological illnesses that are getting worse due to the escalation of unresolved security and political issues. However, there are other reasons behind the spread of these illnesses in Iraq, including society itself.

Statistics released by Doctors Without Borders in 2006 showed 18.6% of Iraqis afflicted by psychological illnesses. Iraqi culture, however, perceives anyone who seeks psychological help as "crazy," which increases the number of cases and renders the treatment difficult.

Al-Rashad Hospital, on the outskirts of Baghdad, houses 1,300 patients suffering from different types of psychological illnesses, mainly schizophrenia and depression. The hospital is dealing with a lack of medical cadres, with only 11 doctors, as noted by the media manager of Baghdad’s Rusafa Health Department, Qassem Abdel Hadi Dayekh.

“The lack of cadres comes as a result of the low number of students enrolling in psychiatric studies in Iraq,” Dayekh told Al-Monitor.

He said, “Iraqi society perceives those who seek psychiatric help as crazy, which renders the field of psychiatry as a luxury. Patients do not frequent psychiatric clinics, yielding them non-lucrative.”

Despite the growing numbers of psychological illnesses in Iraq, there are only three psychiatric hospitals, Al-Rashad and Ibn Rushd in Baghdad, and Suz Hospital in Sulaimaniyah, according to Dayekh.

Dayekh questioned the statistics of international organizations indicating the worsening psychological situation of Iraqi citizens. He said, “International organizations may be seeing some Iraqi customs, traditions and behaviors as a mental illness. This might be wrong.” He pointed to another social imbalance: “The parents of some hospitalized patients recovering from seizures would rather leave them in the hospital than face society's perception toward these patients. They then become a burden on the hospital, and they occupy hospital beds that are much needed by others in the community.” Although Samer Abdul Ali, a taxi driver, believes that all Iraqis are suffering from mental illnesses, he refuses to go to a psychologist as he thinks that all doctors are also ill and in need of treatment.

Samer, honking the horn of his car and swearing at other drivers passing by, told Al-Monitor, “Psychological illnesses will end when the security situation stabilizes. We have become accustomed to our diseases.” Moaid al-Khafaji, a third-year medical student, told Al-Monitor, “Some medical specializations such as dermatology, radiology or otolaryngology are more popular than psychology, as they require less close connections with patients and provide more facilities compared with psychology, in addition to the higher salaries these doctors can make.”

However, Khafaji, who has not yet decided his field of specialization, said, “Psychology has become an ideal choice among medical students, and they wish to specialize in it, though timidly. …During my brief study of psychology, I noticed an intentional marginalization of this specialization and a minimization of its importance. This is evidenced by the number of theoretical courses allocated to this material, and the scheduling of these courses at the end of the daily lectures.”