With Baghdad’s slums accommodating more than 2 million people, a solution to the housing crisis needs to be part of an urban planning strategy, something that previous governments ignored when distributing land to the poor. 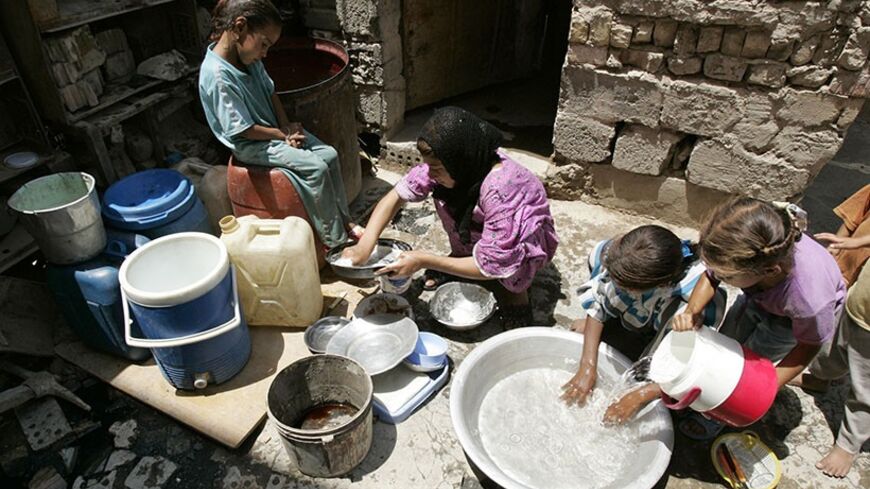 Girls wash dishes outside their house in a slum in Baghdad's Sadr City, July 31, 2007. - REUTERS/Kareem Raheem

The housing crisis has been a curse on successive Iraqi governments, and the problem lasts despite attempts by some governments to find patch-up solutions. For example, the solution of the government of Saddam Hussein was to distribute land to the needy, thus leading to Baghdad expanding without appropriate urban planning. As Harith Hasan reported for Al-Monitor last month, Prime Minister Nouri al-Maliki has made acceleration of public housing development and distribution of land a bedrock of his campaign promises, blaming others for the current crisis. Maliki's government distributed 150-square-meter (1,614-square-foot) plots of land to those who had trouble finding housing, however this has been done with no urban planning or in-depth study of the crisis — which is getting worse as Iraq’s population increases.

After the US forces occupied Baghdad in 2003, there has been an increased need for housing. Amid an absence of the state, families started building slum housing on agricultural land or land owned by the state, and this kind of housing now has its own market in Iraq.

On the eastern edge of Baghdad, in the industrial area, Abu Ahmed built a small house for his seven-member family because he could not continue paying rent. He bought a plot of land with $10,000 and built a structure on it for about the same amount, but the area has no sewage system and no potable water. Thus, residents of this area are compelled to buy water from mobile tankers. There are many insects in the area and sewage collects in a pond close to the house and does not get drained by the municipalities. Al-Monitor met Abu Ahmed, who said that he is happy since he does not have to pay rent.

There are many other citizens like Abu Ahmed. The slums of Baghdad constitute about 33% of all the slums in Iraq, and Baghdad’s slums house about 2.5 million people.

Although there are no clear reports about the possibility of armed groups exploiting the slums, the exploitation of slums has occurred in most of the region’s countries, especially since the slums’ residents are poor. However, Dakhil does not think this will happen in Iraq. “It is wrong to think that slum dwellers will turn into criminals because they are poor citizens. … The responsibility lies with the government regarding the slums' crisis. The [government] should reclassify the land on which slums were built and build [on that land] low-cost dwellings, or find an alternative and evacuate these areas,” she added.

Abdul Zahra al-Hindawi, the spokesman for the Ministry of Planning, said, “The problem of the slums is new to Iraq because it emerged after 2003.” He told Al-Monitor, “Most slums were built on state-owned land, and it is difficult to solve [the problem] overnight.”

Hindawi explained: “The Ministry of Planning has surveyed the slums to give the state a true picture of the problem to develop effective solutions. When we talk about 2.5 million slum residents, this reveals that the problem is getting worse and that it requires urgent action to find radical solutions. The national strategy for poverty alleviation includes building low-cost housing as an alternative to the slums, and the building of various housing complexes has started in a number of provinces. When the construction is finished, the [housing units] will be distributed to the poor, most of whom are slum dwellers.”

About the housing initiative launched by Maliki, Hindawi asserted, “Every step to build housing complexes solves part of the crisis.”