Shopping for guns in Sadr City

In Baghdad's Sadr City neighborhood, a weapons market opens its doors every night to tribesmen who buy all kinds of arms, while the government claims to be unaware of the situation. 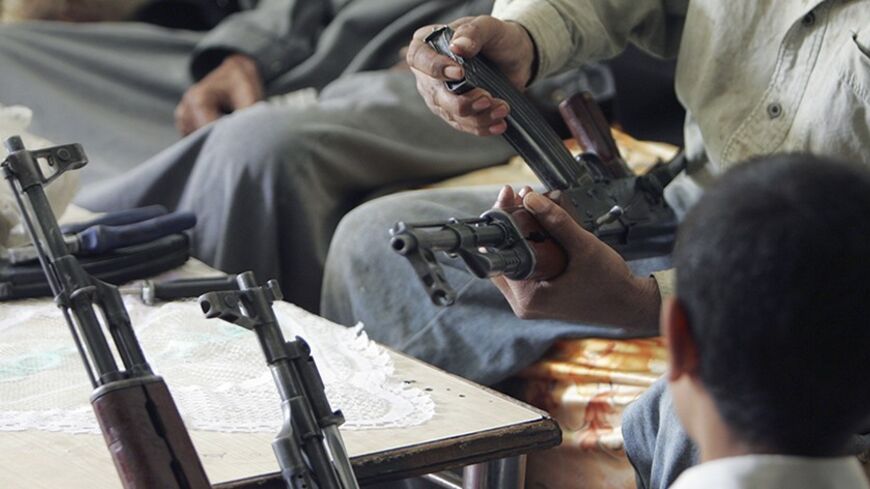 A buyer inspects a weapon inside a shop selling firearms in Baghdad, Mar. 2, 2006. - REUTERS/Faleh Kheiber

Who would imagine that a country with 1.5 million people in the army, police and intelligence apparatuses, would have a black market where weapons such as handguns and machine guns are sold like vegetables in the market?

This is what is happening in Iraq. Every night, a number of young men set up stands in Sadr City, east of Baghdad, displaying various types of arms and munition.

This market is located in the Mredi area of Sadr City, which constitutes the stronghold of the Sadrist movement led by Muqtada al-Sadr. The area is also known for being home to the leaders of Shiite militias that emerged during the period of heavy sectarian clashes in 2006-2008.

Children practice aiming their guns into open space at the market, while their fathers stand next to them, proudly smiling. Arms are sold just like any permitted goods. The residents of Sadr City even know the opening and closing hours of the bazaar, which is simply known as “the weapons market.”

Al-Monitor met with vendor Rahim, who said, “This market is old, dating back seven years. … The majority of customers are tribesmen who own arms in case fighting erupts between the tribes.”

Sadr City is considered one of the most staunchly tribal areas, where tribal customs are enforced more than state laws. Vendors can provide all types of unavailable arms, including heavy weapons.

“The demand focuses on rifles and guns. Yet, some try to buy PK machine guns, or grenades, which we don’t have,” Rahim said. According to weapon vendors Al-Monitor met, arms are available through buying from and selling to the public who continuously replace their weapons or sell them due to financial hardship. “We buy some arms from soldiers or officers in the Iraqi Ministry of Interior,” Rahim said.

The demand is focused on the popular Glock pistol that is largely made out of plastic and is used by members of the ministries of interior and defense. The Glock pistol is considered a good-quality gun and sells for $2,500.

A security source in the Ministry of Interior told Al-Monitor, “This market is hard to control, given the cohesive social fabric in Sadr City. … The market does not pose a threat to security because the majority of those buying arms are not terrorists, but rather tribesmen who solve their fights among themselves.”

Rahim said, "Every now and then, the army and police raid the market. But they are not able to arrest any vendors, because we have watchers who inform us before they reach the market. By the time they get to the market, we have run away.”

Iskandar Watwat, a member of the parliamentary Security and Defense Committee, told Al-Monitor that he had “no information about this market.” However, Watwat called for “filming this market using mobile phones, so that the required measures can be adopted to arrest the vendors.”

Ammar Tohme, another member of the same committee, affirmed that he would “follow up on this information,” expressing his surprise about the presence of such a market in Baghdad. He told Al-Monitor, “I will talk to the intelligence agency to follow up on this issue, and I will go in person to see the market.”