Not all PA civil servants in Gaza want jobs back

Around 3,000 public servants in Gaza are scheduled to return to their government posts as part of the April reconciliation deal between Fatah and Hamas, providing more opportunities for the unemployed — but some of them prefer their second jobs. 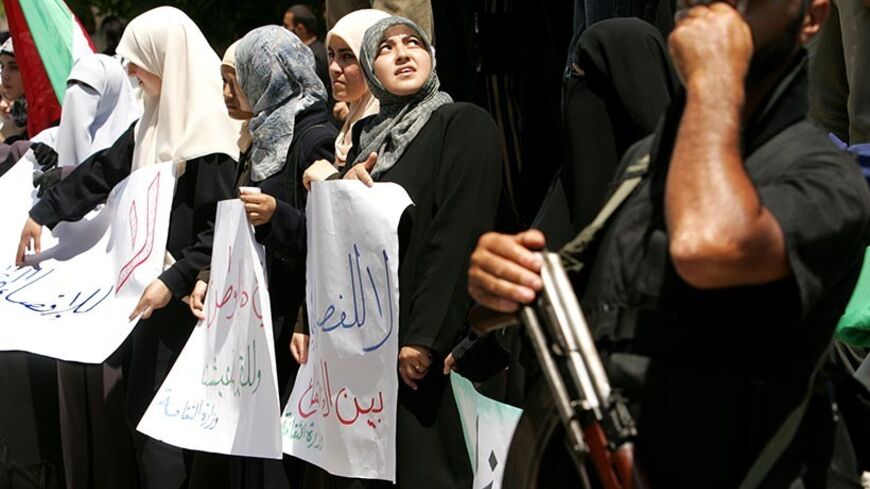 Palestinian employees who feared they would not be paid by the new emergency government formed by President Mahmoud Abbas attend a protest in Gaza, July 3, 2007. - REUTERS/Mohammed Salem

GAZA CITY, Gaza Strip — Fatah and Hamas have agreed to allow 3,000 employees from the Palestinian Authority (PA) who were abstaining from work to return to their duties at the various ministries in Gaza. But this agreement has raised grave concerns among the employees, who fear losing the side work that has provided them additional streams of income over the past seven years.

Following Hamas’ military takeover of Gaza in June 2007, the PA ordered its employees in all government and security institutions of the Gaza Strip to completely stop work, but said they would continue receiving their salaries.

The decision allowed the employees to search for other sources of income that would complement their salaries, such as jobs in private factories or institutions, establishing commercial enterprises or working as taxi drivers, according to economist Mohamed Mekdad.

“Thousands of abstaining employees have additional jobs to supplement their income. Those people are concerned that Palestinian efforts to restore them to their government jobs would lead to the loss of their extra sources of income,” Mekdad told Al-Monitor.

Mohammed Abu Radi, an employee at the Ministry of Economy who stopped coming to work in compliance with Abbas’ decision, was wary of returning to his government job, since doing so would force him to quit his other, well-paying job.

“The void created by my abstinence from work drove me to look for extra work to supplement my income. As a result of my considerable experience, I landed an accountant job at a textile company,” he said.

Abu Radi told Al-Monitor that he would have to quit that job if a decision were made ordering him to return to work at the ministry. “That eventuality would put an end to the golden age enjoyed by abstaining employees who were earning extra money that supplemented their main salaries paid by the PA,” he added.

Mekdad noted that restoring abstaining employees to their original government jobs would force hundreds of them to abandon their second jobs, thus creating opportunities for the unemployed to join the workforce.

According to the Palestinian Central Bureau of Statistics, the unemployment rate in the Gaza Strip rose from 38.5% in the fourth quarter of 2013 to 40.8% in the first quarter of 2014, while in the same period, the rate remained unchanged at 18.2% in the West Bank.

Khalil Agha, an employee at the Interior Ministry, concurred with Mekdad, saying, “I and all my abstaining colleagues found other jobs that generate additional income. Some of us work in factories, drive taxi cabs or own shops.” He added that leaving those second jobs would provide work opportunities for many unemployed Gazans.

When asked whether he believed these second jobs came at the expense of the unemployed, he smiled sardonically and replied, “In this country everyone looks for their own personal interests. You cannot blame me for the spread of unemployment in Gaza.”

On the other hand, government employee Raouf Abdel Ati told Al-Monitor that he would refuse to abide by the decision to return to his government job because his second one generates considerable income. “Abstaining from going to my government job led me to work as a taxi driver, which generates a substantial amount of income, and abandoning it would be foolish.” He indicated that he preferred taking an early retirement and not having to relinquish his taxi driver job.

The PA spends $100 million per month on the salaries of 70,000 employees who abstain from work in the Gaza Strip, according to an official Fatah source.

The source, who requested anonymity, told Al-Monitor that during its visit to Gaza on April 22, the PLO’s delegation agreed with Hamas, as a start, to restore 3,000 employees to their jobs in the police force, national security and civil defense.

“The implementation of this agreement is expected to occur right after the formation of the new government,” he said, and indicated that new arrangements would be made to restore additional numbers of employees once the first batch of people resumes their jobs.

He said this human resources problem harmed the economic development of Palestine, as a great number of people were reduced to mere consumers once they stopped going to work. Meanwhile, others succeeded in finding additional work, leading to reduced opportunities for the unemployed.

He stated that resolving the economic problems engendered by the years of division would require decades, and the return of government employees to their jobs “does not solve those problems, nor does it put an end to them.”

“New work opportunities will open up for the unemployed once the abstainers quit their second jobs, and that is a very positive thing. Yet, as a result, college graduates will find it harder to get government jobs, where vacancies will be few in the years to come,” the economist said.

In the face of the economic challenges caused by the disputes that have raged between Fatah and Hamas, leading to deep divisions in Gaza, Mekdad believes that the only way out of this predicament is to create an early retirement plan. He said this would give rising Palestinian generations a chance to find jobs in the private as well as the public sector, thus reducing unemployment while increasing productivity and the number of people joining the workforce.