Prime Minister Erdogan says the opposition “fails to understand” that the people are behind the AKP. 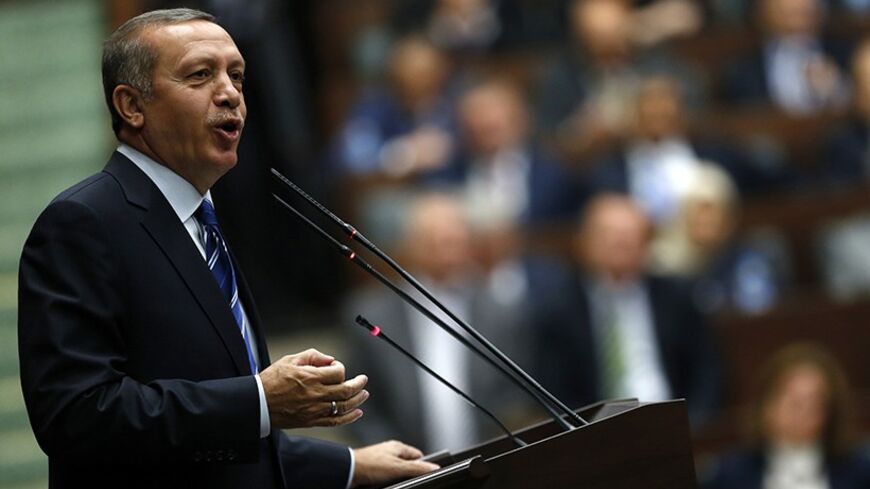 Turkey's Prime Minister Recep Tayyip Erdogan addresses members of parliament from his ruling Justice and Development Party (AKP) during a meeting at the Turkish parliament in Ankara, April 29, 2014. - REUTERS/Umit Bektas

Turkey’s Prime Minister Recep Tayyip Erdogan said on May 11 that he has not yet made up his mind to run for president in the first public election for the post. He said, however, that if he gets elected three months from now he won’t be a passive president performing only ceremonial duties. He argued that the opposition has no chance to defeat his party’s candidate at the ballot box.

“The opposition is now talking about coming up with a joint candidate. They, however, fail to understand that the people once again threw their support behind us with the March 30 local elections,” Erdogan said, addressing the Justice and Development Party (AKP) annual gathering on Sunday in Afyonkarahisar. According to Erdogan, the country’s two leading opposition parties — the Republican People’s Party (CHP) and the Nationalist Movement Party (MHP) — have no chance to convince their bases in favor of a joint candidate and to win the Kurdish vote all at the same time.

Adil Gur, head of A&G Research, a polling company, agrees: “It’s not only how difficult it is for these opposition parties to agree over a joint candidate, but no one should also underestimate the triumph of the prime minister in this March 30 local election,” he told Al-Monitor, noting that Erdogan won despite being under a judicial review of corruption and bribery since December that ensnared his government. “Still, though, his constituency extended an exceptional loyalty to him in a time of crisis and he came out even stronger as a leader from this election.”

The Supreme Election Board (YSK) provided the official results of the local election as follows: The AKP received 42.8% of the vote while the CHP gathered 26.3%, the MHP 17.8% and the pro-Kurdish Peace and Democracy Party (BDP) and People’s Democratic Party (HDP) a combined total of 6.1%. Technically speaking, as Gur pointed out, the sum of the CHP and MHP vote equals 44.1%, more than the AKP vote for the first time, and that difference becomes even wider when the Kurdish votes are included, bringing it to 50.2%.

With this mathematical calculation in hand, MHP leader Devlet Bahceli said May 7 that the opposition should combine its forces to decide on their candidate. “This is a very delicate time. I am proposing this tactic only for this one time,” he said. The CHP approached it positively, but the names circulated in the media since then are run-of-the-mill politicians with little potential to sweep voters off their feet.

Still, Bahceli sounds confident that the opposition will agree on a candidate and surprise everyone. “Political commentators keep endlessly debating whether Erdogan runs for this post, or Abdullah Gul retains the office. No one, however, talks about why Erdogan should not be the president of this country. They in fact treat him as if he were already elected,” Bahceli said. “We have legitimate concerns about a potential Erdogan presidency. There is still an ongoing graft probe, and the allegations are serious. No person coming under such judicial review should be the president of this country.”

While Bahceli could be right on point, it is not a convincing argument in practical terms — especially in the follow-up to the March 30 local election results. The simple fact is that people who voted for Erdogan have a different perspective on the graft probe than does the opposition. Moreover, if the opposition goes with those tired names already out in the media, the only surprise that they could give the public would be to stun them with their lack of ability in finding a serious contender at the ballot box. If they have a fresh name in mind, they have less than three months to build this person’s candidacy, developing name recognition and positions. They have also to think about financing their candidate’s campaign, and time is running out fast. Erdogan, however, will continue to benefit from the state’s privileges as prime minister.

Although YSK Chairman Sadi Guven said presidential candidates must register between June 29 and July 3, this election is for the opposition to win — not for Erdogan to lose. Therefore, the opposition parties have to prove how serious they are by being more forthcoming with the names of their potential candidates, allowing time for people to react, the pollsters to take their pulses, leading eventually to their final call to win the election. They need to focus on finding the right candidate, rather than waiting up until Erdogan makes his final decision to run for this seat.

The opposition bears the ultimate responsibility to bring fresh energy to this election. “If people are convinced that the opposition does not have a winning candidate, and they don’t as a result come out to vote, Erdogan can get elected in the first round,” pollster Gur told Al-Monitor. “If the election goes for a second round, the Kurdish vote becomes a critical denominator. Erdogan is more likely to get their votes than the opposition, and that makes him the winner in the last round.” The two-round elections are scheduled to take place on Aug. 10 and Aug. 24.

In case Erdogan gets elected, the government will automatically fall but the party will still be tasked to form the new cabinet and will head to the scheduled 2015 general election with a new prime minister. These are, however, all secondary details for the opposition, where their ultimate goal should be determining the right candidate if they want to write a different ending rather than merely criticize the political commentators saying Erdogan is the odds-on favorite to win the election.