School conditions in Yemen are among the worst in the world, as Yemen's government fails to invest in education, and 2 million Yemeni children do not even attend school. 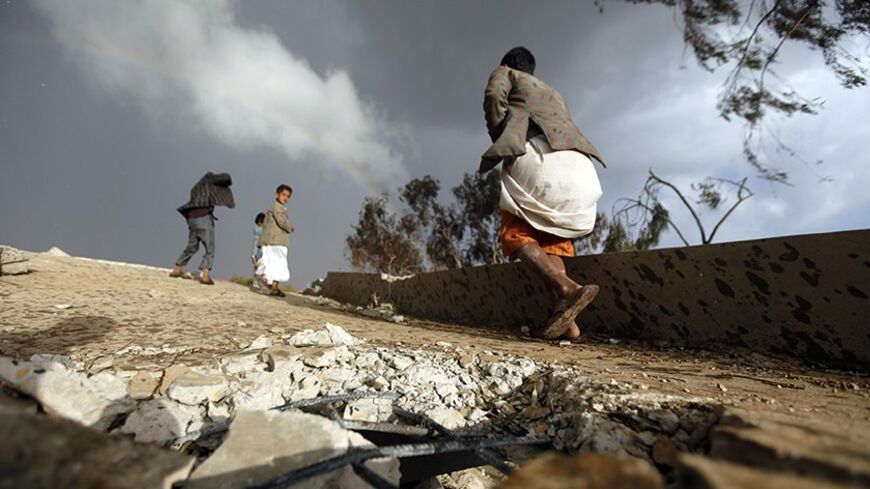 Boys walk on the ruins of their school, which was bombed by the Shiite al-Houthi group during recent conflicts against local tribes in the Hamdan area, west of Sanaa, March 23, 2014. - REUTERS/Mohamed al-Sayaghi

At the beginning of March 2013, the representative of the United Nations Children’s Fund (UNICEF) in Sanaa warned that more than 2 million children between the ages of 6 and 9 were not attending school. Months before that, UNICEF’s executive director had said that 60% of Yemeni children suffered from stunted growth and dwarfism.

Yemen is not a good place to be a child. This is not only because life in general is difficult but also because schools are unable to adapt and serve as nurturing environments attractive to students. This is one of the reasons why fewer students are enrolling in school. Additional reasons are the poor economic circumstances many citizens face and because fewer people recognize the importance of education.

Out of 8 million Yemeni children of school age, only about 6 million are enrolled in school. The dropout rate before eighth grade is more than 40% for girls and more than 25% for boys.

It is no longer surprising to see students dressed in school uniforms in Internet cafes and shops during school hours. Some Internet cafes are posting notices with such messages as “No entry to the cafe for anyone wearing a school uniform.” This step was taken following criticism and complaints by politicians and families that students were going to these cafes instead of heading to school. The notices, however, are nothing more than a way to shift responsibility. Looking at who visits an Internet cafe in the morning would reveal the extent of the chaos in the schools and the lack of social responsibility toward children.

Education is not a government priority in Yemen. The education sector is managed through five different public policies, none of which achieve their short- or medium-term objectives, despite what is claimed in political speeches. Spending on education is only 13% of the state budget, while it used to be 20%. Most of the budget goes to wages and to security and military institutions, which often cannot even protect examination centers against cheating.

The illiteracy rate in Yemen is 48%, and most of that number consists of rural females. About 16 million out of 25 million Yemenis live in rural areas, and more than half of the population is under 18.

Of all the Arab countries, only Yemen, Sudan and Djibouti are classified by the United Nations Development Programme as having low human development. Yemen is also one of the poorest and driest Arab countries. A large proportion of Yemenis, 42%, live below the poverty line, a proportion about the same as the illiteracy rate. Not surprisingly, Yemen’s children suffer from problems related to severe acute malnutrition and stunted growth.

The reasons for this extend beyond the government’s weak or ill-conceived efforts. Nearly 94% of Yemeni schools are without libraries, and a similar number of schools have no laboratories. About 85% have classroom shortages, and electricity is available in only 49% of primary schools and in 23% of secondary schools. Many students in rural areas still study in the open, out in the sun, next to an overcrowded school building or school buildings that used to be residential buildings, some on the verge of collapse.

Some studies suggest that poverty is the reason 15% of school-age children do not attend school. A few years ago, the Ministry of Education implemented an initiative that raised the percentage of enrollment by exempting grade school students from school fees, despite the fees being low. The government reneged then on this decision because without the fees, the schools had no operating budgets. School uniforms, which cost $10 per student, are also an obstacle to enrollment for many students.

Corporal punishment is still widely practiced in Yemeni schools despite government decisions to ban it. This is leading some students to run away, to get out of an oppressive environment. Some seek revenge against their teachers, as did one student in al-Daleh province on March 8, when he set fire to his teacher at school using gasoline. A year earlier, in March 2013, a student had committed suicide because of physical abuse he received at the hands of his teacher.

All of these challenges facing children and schools in Yemen have worsened in recent years because of wars, displacement and conflicts that have destroyed and closed hundreds of schools and displaced thousands of students. The rival extremist, armed and political groups have openly taken in these children and sometimes use them in combat. The UN Security Council, in a Feb. 26 resolution on Yemen, pointed to the problem of warring groups using children in their armed conflicts.

Yemeni children are not only dropping out of school to work (or to find themselves unemployed) but also to join the army and the armed militias, especially in recent years. Their families do not appear to recognize the consequences of their children dropping out. Poor families are also illiterate, and only a few of them are keen on their children staying in school. The lack of an attractive learning environment does not help matters. The government makes only symbolic efforts to bring back those who have dropped out. Thus, the problem continues to get worse.

In the current educational system, students can reach secondary school without having learned to read or write properly. This tempts them to drop out of school or cheat on their mandatory exams.

Yemenis are wasting their energy on wars and struggles, and the government is spending large amounts of money on the military and the security services — money that should be directed toward education. Some youngsters end up getting a small soldier's wage — from the state or armed groups — amid the spread of the child soldier phenomenon, one of the most heinous crimes against children’s rights.