Neither local nor Western press groups condemned the heavy penalties on the pro-government aHaber TV station. 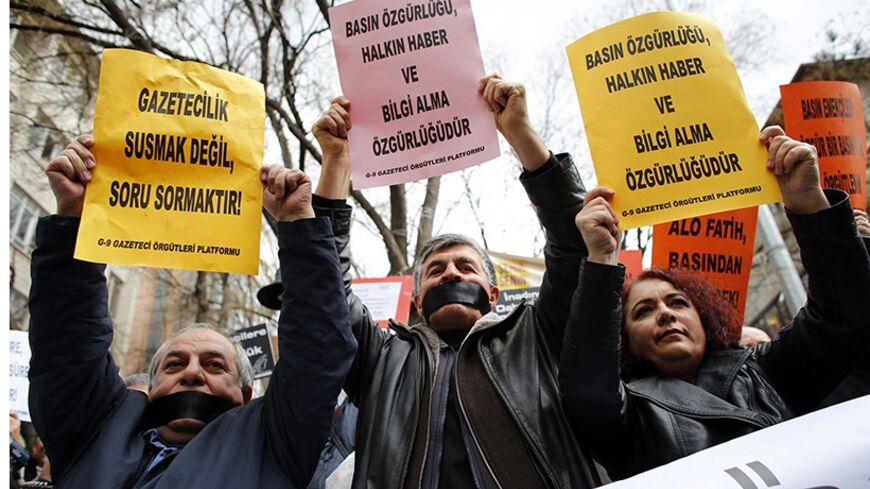 Press freedom in Turkey is an important and equally complex matter, which I have reported on previously in an Al-Monitor article. The complexity of the problem stems from the complexity of Turkey’s political system. Some analysts see Prime Minister Recep Tayyip Erdogan’s government as the only obstacle to press freedom in the country, arguing that the authoritarian government wants to have only docile media and suppresses critical voices. No doubt, there are cases of government interference in press freedom, but a recent incident demonstrates how complicated the situation actually is.

In April, the Higher Electoral Board (YSK) and the Higher Board of Radio and Television (RTUK) slapped a program suspension penalty — 28 programs on one occasion and 17 on the other — on the pro-government aHaber TV station, the channel of the daily Sabah, one of Turkey’s two largest-selling newspapers along with Hurriyet. The Sabah group is headed by a powerful figure — the brother of Erdogan’s son-in-law. So, a pro-Justice and Development Party (AKP) TV channel, run by an Erdogan relative, will have a total of 90 hours of its programming suspended and incur significant commercial losses. The scale of the penalty is unprecedented. Not even less influential pro-AKP channels have faced such severe sanctions. AHaber’s management says the reason behind this press freedom violation is their unequivocal struggle against the Gulenist parallel setup within the state, which is seen as a criminal organization.

And this is how the YSK penalizes aHaber: “A review of aHaber’s broadcasts on March 14-20 established that two election rallies held daily by the Justice and Development Party were all aired live and in full. Overstepping the objective of news reporting and informing the public, this one-sided and biased format that denied equal opportunity [to others] has failed to meet the norm of impartial broadcasting. … Hence, the provision that [broadcasting services] ‘cannot be one-sided or biased in favor of [certain] political parties and democratic groups' has been breached, and thus a penalty has been deemed to be appropriate.”

In short, the YSK says the channel took sides by broadcasting AKP rallies and was thus punished. Yet, any Turkish television viewer knows that many other channels broadcast AKP rallies from beginning to end. This cannot justify the ban. Why did other channels go unpunished? And mind you, a TV channel was penalized for broadcasting Erdogan rallies in a country where Erdogan was said to be a dictator. Moreover, no one spoke out against the ban since the Turkish media is a realm void of principles and ethics.

In its reaction to the penalties, the Turkuvaz Media Group, which owns aHaber, lamented the attitude of the Turkish media: “During the Gezi events, the crowds that gathered outside our Istanbul office showered insults on our group and pelted our building with stones. They attempted to burn down our Izmir office with petrol bombs and shattered its windows. … Neither press associations nor journalists’ unions reacted. Neither the Press Council nor the Media Association said anything. The Constitutional Court, too, had nothing to say. Fellow journalists failed to condemn the attacks on colleagues and withheld any gesture of support. We received not even a slightest message of solidarity from opposition parties, which claim to be advocates and guarantors of freedoms, civic society groups, foreign diplomats, the EU, the United States or international press organizations.

“In the course of the Dec. 17 coup attempt [graft probe], all cadres of the parallel structure targeted our group with all their might. Insults, slanders and attacks became routine. And the press associations, journalists’ union, the Press Council, the Media Association, our colleagues, the opposition’s spokesmen, the civic society groups, the Constitutional Court, the international press organizations, the EU, the United States … they remained mum again!

“In the aftermath of the local elections, the parallel structure’s people in RTUK’s lower levels penned false reports and the YSK judges — their sense of justice blinded — showered penalties on aHaber as if they sought to avenge the election results, make us pay the price for the opposition’s failure and punish the people for the choices they made. And yet again, the journalists’ union, the Press Council, the Media Association, the civic society groups, the Constitutional Court, the EU, the United States and our colleagues had nothing to say. They were all mum. 'Silence gives consent,' the saying goes. And this silence seems to be an effort to disguise covert joy. Those who raise hell for the smallest sanction on their own channels or the channels they feel close to are looking the other way when heavy penalties are being slapped on the Turkuvaz Media Group out of vengeance. Shame on all of them! But we’ll neither bow nor keep quiet. We will continue on our path — upright, with courage and dignity.”

So, as these lines indicate, the Turkuvaz Media Group blames the Gulenists for the heavy penalties it received from the YSK and RTUK.

In my opinion, a problem of double standards in almost every realm in Turkey extends also to the realm of press freedom and freedom of speech. People turn a blind eye to and sometimes even approve of breaches of freedom of expression when those breaches victimize media or individuals they dislike. The 45-program suspension penalty against aHaber is just one example — certain quarters that talk big on freedom of expression have suddenly gone mute.

First of all, even if certain broadcasting rules have been violated, symbolic or more reasonable penalties could have been considered since no one has suffered any concrete damage. It is nonsense to punish media outlets for failing to give political parties equal coverage. Such a penalty can make sense only with respect to the public TRT TV station, which is a public institution funded with public money. But private television is private.

Atilla Yayla, the internationally renowned political scientist who heads the Liberal Thought Community, writes this on the issue: “The penalties against aHaber are clearly incompatible with freedom of expression, a right that belongs to everybody and not just some privileged people and quarters. This incident comes as an opportunity for those who claim to advocate free speech to prove their sincerity. Come on, buddies, the floor is all yours.”

Yayla then points to some cases misleadingly presented as a suppression of free speech before he gets to the Twitter controversy: “For instance, when a newspaper fired a long-time, highly paid columnist for this or that reason, this did not mean that his freedom of expression was obstructed or violated. It only meant that the columnist lost a job and therefore some sweet money. The journalist in question still has two TV programs and can find a paper to write for any time, but continues to accuse the paper that fired him as if it has a moral and legal obligation to keep him writing. His claim that his freedom of expression has been violated amounts to no more than an amusement that one can laugh at and relax in times of boredom.

“Secondly, freedom of expression is not the only value that needs to be protected. There are others, too, including personal rights. When those two values are in conflict, one should strive to set a reasonable balance, rather than sacrificing one value for another. For instance, if a woman is photographed naked without her permission and if the photos are posted against her will on Internet platforms accessible to millions of people, the protection of her privacy is as important as freedom of expression. In situations like this, a way should be found to protect the victim’s privacy without resorting to disproportionate measures and collective punishment. And no doubt, this depends on social media companies cooperating with the local legal authorities.”

As noted above, the problem of press freedom in Turkey is a very complex matter. The government exerts pressure on some media, but at the same time the YSK and RTUK, emboldened to a certain extent by the Gulenist movement, are capable of slapping a 90-hour program ban on a TV channel. Hence, Turkey’s political system is not dominated by a single master. It is a bizarre country difficult to understand. The reality on the ground cannot be analyzed with clichés.