Kerry to Senate panel: 'I may fail. I don't care'

Senate Foreign Relations Committee members pressed US Secretary of State John Kerry on US policy in the Middle East. 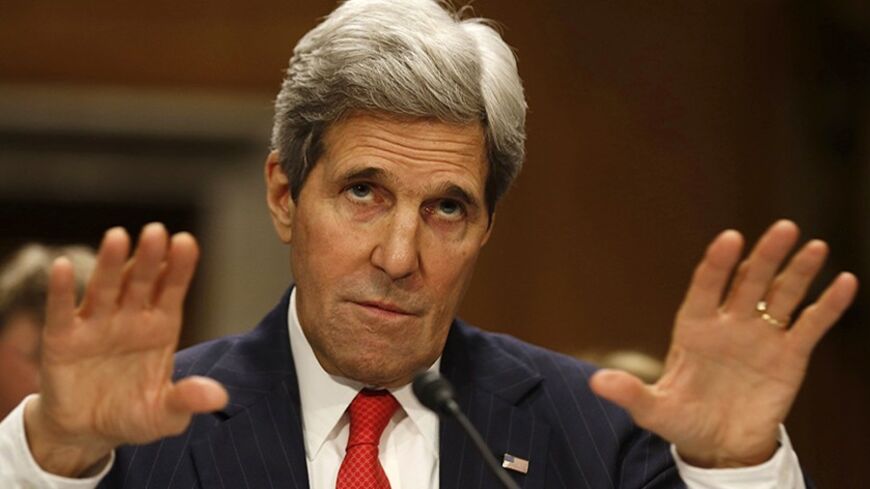 US Secretary of State John Kerry testifies at the Senate Foreign Relations Committee while on Capitol Hill in Washington, April 8, 2014. - REUTERS/Larry Downing

Secretary of State John Kerry returned from a grueling 12-day trip to Europe and the Middle East only to have his record of diplomatic activism get a bipartisan bashing Tuesday on Capitol Hill.

Kerry's appearance before the Senate Foreign Relations Committee was his first since Syrian and Israeli-Palestinian peace talks floundered even as nuclear negotiations with Iran have taken off.

While ostensibly gathered to hear Kerry pitch his budget request for fiscal year 2015, lawmakers pressed him on the three issues where they've been most critical of the Obama administration's efforts.

"I think you're about to hit the trifecta," said Sen. John McCain, R-Ariz. "Geneva II was a total collapse as I predicted to you that it would be. … The Israeli-Palestinian talks, even though you may drag them out for a while, are finished. And I predict that even though we gave the Iranians the right to enrich, which is unbelievable, those talks will collapse, too."

He went on to accuse the administration of getting his hero former President Theodore Roosevelt's maxim backwards.

"What you're doing is talking strongly and carrying a very small stick," McCain said. "In fact, a twig."

Fellow Republicans Bob Corker of Tennessee and Jim Risch of Idaho piled on, and chairman Robert Menendez, D-N.J., asked for a commitment that the administration would seek congressional approval to lift sanctions as part of a final deal after the administration all but acquiesced to allowing Iran to continue enriching uranium.

"It is far different from where we started off, and what we were told, to where I believe we are heading," Menendez said. "And this is why so many members joined us in staking out a ground" for a final deal in a letter to President Barack Obama signed by 83 senators last month.

Kerry said he was "agnostic" rather than "optimistic" about the chances for a final deal, but promised to bring it before Congress if it came to pass.

"Of course, we would be obligated to under the law," Kerry said. "Clearly, what we do will have to pass muster in Congress. We well understand that."

The sharp exchange comes as many lawmakers are increasingly frustrated with concessions to Iran and with the civil war in Syria, which is entering its fourth year. The failure of Obama's warnings to Russian President Vladimir Putin to back out of Crimea has only increased their concerns.

"From a bipartisan standpoint, people are very concerned right now about US credibility," said Corker, the top Republican on the panel. "We have created an air of permissiveness."

Kerry bristled at the Republican insinuations that his efforts have been fruitless.

"Let me begin with … your premature judgment about the failure of, hum, everything," he told McCain. "I guess it's pretty easy to lob those judgments around, particularly well before the verdict is in on any of them."

Kerry went on to defend his effort to help broker a two-state solution between Israel and the Palestinians.

Kerry said it was up to the two parties to reach a deal and put the blame for the current breakdown largely on Israel. Congress by contrast has solely blamed the Palestinians, even threatening to cut off aid.

"The [26] prisoners were not released by Israel on the day they were supposed to be released and then another day passed and another day, and then 700 [housing] units were approved in Jerusalem, and then poof," he said. "That was sort of the moment."

The secretary of state also defended his decision to organize Syrian peace talks with his Russian counterpart, Sergey Lavrov. Although the family members of opposition leaders who participated were subsequently kidnapped, Kerry said the talks helped unify the opposition and make clear to the world that Syrian President Bashar al-Assad isn't interested in a negotiated settlement.

Kerry said the administration has beefed up support for the rebels. He promised to brief the Senate on US efforts to arm and train rebels, in closed session.

"We are deeply engaged with the opposition," Kerry said. "We are more engaged than we've ever been before. Right now. And more successfully right now."