Rouhani responds to controversial documentary about him

Iran's president has obliquely responded to an unauthorized documentary about his career by condemning "us[ing] the public treasury to destroy an administration elected by the people." 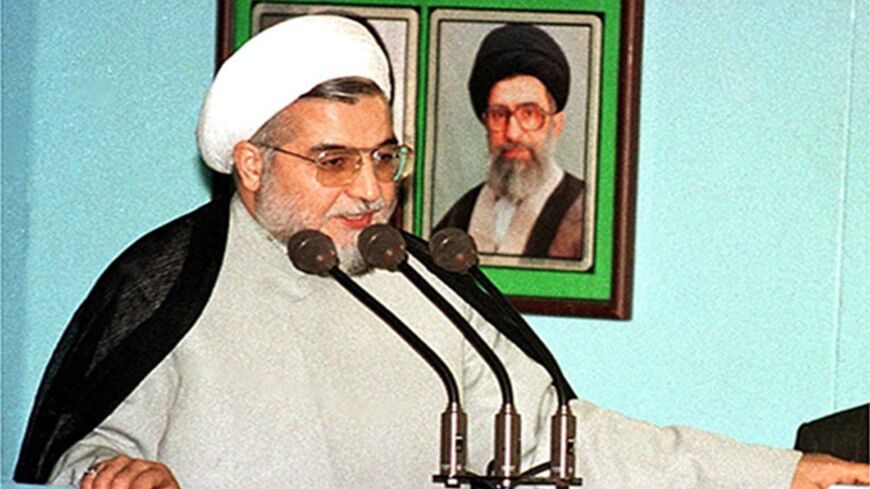 Hassan Rouhani, then-deputy speaker of the parliament and secretary of the Supreme National Security Council, addresses thousands of pro-regime demonstrators who gathered July 14, 1999, at Tehran University.

Iranian President Hassan Rouhani responded today, April 29, to a highly controversial documentary about his career that many believe was made by a group associated with Iran’s Islamic Revolutionary Guard Corps (IRGC).

“Criticism is the right of the people and of all groups,” Rouhani said today at the opening ceremony of Tehran’s international book fair. “What is not acceptable is when someone, rather than criticize, wants to use the public treasury to destroy an administration elected by the people and with the majority of the votes. This is something the administration won’t accept.”

“Therefore, we want everyone to speak with an ID and to state to where and which group they are connected,” he added.

Rouhani did not mention who or what his criticism was aimed at, but there was no doubt for Iranian websites and observers that he was referring to the one-hour documentary “I am Rouhani,” which surfaced online April 27.

Using mostly stock footage and photographs overlaid by a soft-spoken narration and at times using Rouhani’s own interviews, the film covers some key moments of Rouhani’s career. It has been shared widely on social media. The fact that the film has been made from pre-existing content, rather than revealing new, unknown imagery, appears to be the major source of the controversy. One valid criticism of the film could be that it exaggerates Rouhani’s executive role in specific events by relying on statements in support of the events.

According to the film, then-speaker of parliament Ayatollah Hashemi Rafsanjani appointed Rouhani as one of the key figures to work with then-US President Ronald Reagan’s national security advisor, Robert McFarlane. McFarlane was one of the individuals implicated in the Iran-Contra affair, which involved secretly selling weapons to Iran during the Iran-Iraq war. Rafsanjani and Rouhani are portrayed as the key figures behind the deal. Current parliament speaker Ali Larijani, who criticized the making of the film, called this accusation “untrue” and said that the individuals involved with McFarlane were known to everyone.

The film addresses Rouhani’s pre-revolutionary activities, his support in making the veil mandatory after the revolution, his participation in secret meetings with Rafsanjani to discuss ways to end the Iran-Iraq war, accusations by conservative Resaalat editor Morteza Nabavi that Rouhani, as the secretary of the Supreme National Security Council, ordered the Basij to end student protests in 1999. It also covers his role as chief nuclear negotiator in 2003, when Iran suspended its nuclear program, which the documentary called a “mistake.” The film ends with melancholy music played over images of Iran’s assassinated nuclear scientists.

The film’s director Masoumeh Nabavi told Raja News that she wanted to show that Rouhani us a “revolutionary figure who is within the system.” She felt that after the elections, people needed to know that Rouhani “played a role in many key moments of the revolution.”

Nabavi made the film for Shafagh Media, a media company believed to operate under the IRGC, which is currently at odds with Rouhani over the economic and cultural direction of the country.

However, the hard-line websites that have promoted the film or interviewed Nabavi have not confirmed the connection between Shafagh Media and the IRGC. The website Iran’s Young Officers of the Soft War shows a profile of a Masoumeh Nabavi, but it is not clear whether it is the same individual. Nabavi also said that many political figures close to Rouhani refused to be interviewed during the research for the film.

The film has been a source of controversy at several universities. The presidents of the Birjand and Tehran medical schools have reportedly denied permission for the film to be screened there. The directors of cultural affairs for Allameh Tabatabaei and Amir Kabir University deny that they did not allow the film to be screened at their universities. Universities in Iran are run under the purview of the Culture Ministry.