An Iranian lawmaker has said that the four Iranian border guards recently released by a local terrorist group should be punished for failing in their duties. 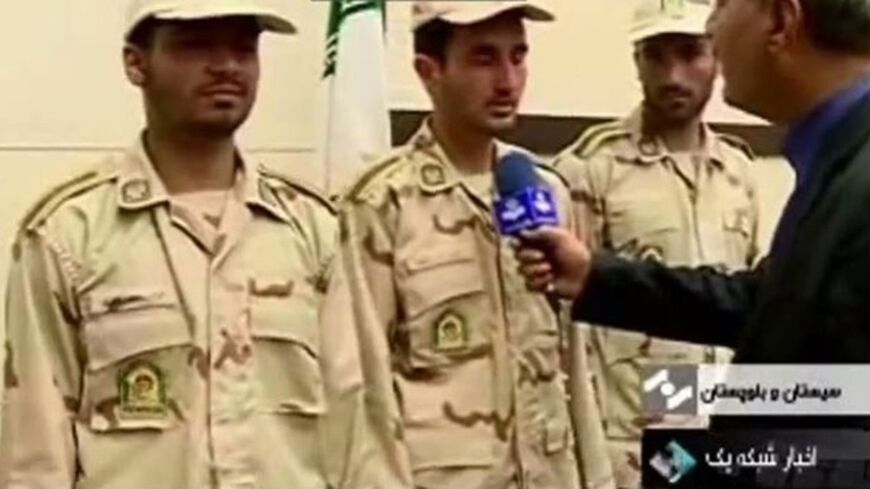 An Iranian lawmaker has said the four Iranian border guards recently released by a terrorist group should be disciplined.

“I believe the four soldiers freed from the terrorist group Jaish al-Adl should be confronted for violations and failure to do their duties,” said Ismail Kowsari, a Tehran parliamentarian and Defense Committee chair. “The punishment is so that during their service, these violations are not repeated.”

In February, five guards on the mountainous Iran-Pakistan border were kidnapped. The video released by Jaish al-Adl, a Sunni Baluch Islamist group, showed that all of the border guards were sleeping when their tent was overrun.

Of the five guards kidnapped, one, Jamshid Danaeifar, was reportedly killed. However, his body has not been returned and the announcement of of his killing on the the Jaish al-Adl website has been taken down. He was the only regular army serviceman of the group. The other four are conscripts. Military service is mandatory for Iranian men.

Commander of the Iranian Border Guard Units General Hossein Zolfaqari told reporters April 6, “Based on Jaish al-Adl’s statements, [Danaeifar] was martyred. But no reason, proof or document … of his martyrdom has been shown to us. No film or body … has been presented.” Zolfaqari said that Danaeifar was separated from the other guards approximately a month ago, and the group claims its is unable to deliver his body.

The release of the border guards has been big news on both traditional Iranian and social media. The first pictures of their release, showing the guards in new military uniforms, was shared widely on social media. Sunni Online, a Persian-language website dedicated to news of Iranian Sunnis, shared pictures of the four guards crossing the mountains from Pakistan into Iran.

Iranian and Pakistani officials have exchanged accusations since the guards were kidnapped. Pakistan claims its has thoroughly searched its side of the border and denies that the border guards were ever held inside Pakistan. It also accused Iran of not following up on a joint committee to investigate the matter.

However, immediately after the guards were freed, Zolfaqari said that Pakistan played no role in their release. “Despite some actions by Pakistan’s border guards to find the Iranian border guards, the intelligence, military and police forces of this country had no role in the freedom of these hostages,” he said. He also said that since the soldiers were handed to Iran from the Pakistani border, Pakistan’s claims that the soldiers were not on their soil are “baseless.”

Zolfaqari instead gave credit for their release to the governor of Sistan-Baluchistan province and local religious and tribal elders. Molavi Abuldhami, perhaps Iran’s most prominent Sunni cleric, was reportedly instrumental in securing the release of the guards.

The governor of Sistan-Baluchistan province, Ali Osat-Hashemi, also gave credit to the elders and religious clerics of the province for helping secure their release. President Hassan Rouhani also issued a statement urging the continued search for Danaeifar and said that the guards' release shows Iran’s commitment against terrorism. He did not mention the role of the governor or local leaders.