A warm greeting between Ayatollah Hashemi Rafsanjani and the new Saudi Arabian ambassador to Iran, Abdulrahman Bin Groman Shahri, has angered many Saudis, who still view the two countries as regional rivals. 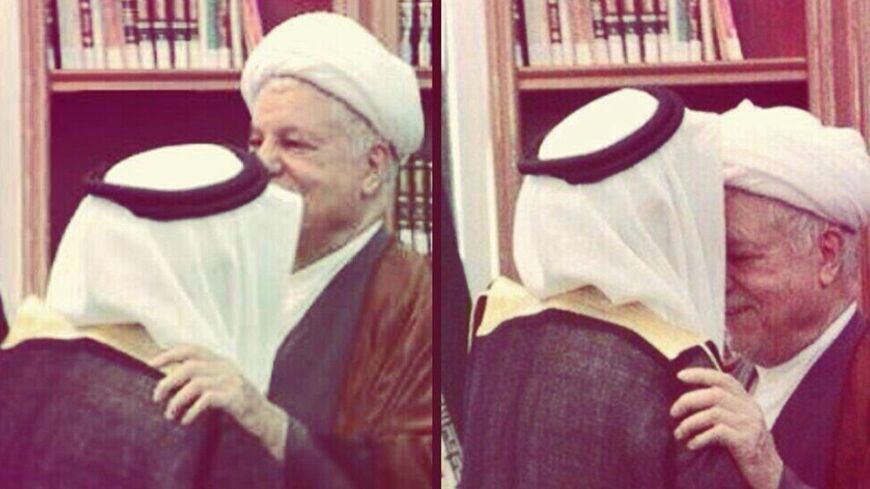 After a meeting between Ayatollah Hashemi Rafsanjani and Saudi Arabia’s new ambassador to Iran, Saudis on Twitter criticized the warm meeting between the regional rivals.

Saudis used the hashtag #Saudi ambassador kisses Rafsanjani’s head to criticize Abdulrahman Bin Groman Shahri for kissing Rafsanjani during their greeting in Tehran. Many felt that the ambassador should not have been so friendly toward a top official of a country perceived as an enemy.

Fars News, however, covered the Saudis' activity on Twitter and translated Arabic tweets into Persian. Shiite Saudis questioned why they are sometimes accused of being “mercenaries for Iran” or of being Iranian, yet their ambassador “kisses the forehead of the one of the Iranian leaders,” reported Fars. The article also translated the tweets of Saudis who support the Syrian opposition and were angered that a Saudi official would greet someone whose government is supporting President Bashar al-Assad. Some of them even juxtaposed pictures of dead Syrians with that of the ambassador and Rafsanjani kissing.

Reformist newspapers in Iran gave the meeting positive coverage. Etemaad put the kiss on its front page. Hard-line media, typically critical of Rafsanjani and his efforts to reach out to regional neighbors, especially Saudi Arabia, have not reacted strongly to the meeting. Rafsanjani’s personal website also commented on the issue and shared pictures of the meeting.

During the meeting, Rafsanjani reiterated his desire to have a closer political and religious relationship with Saudi Arabia, saying, “If the two countries are harmonized on regional issues and the Islamic world, seditionists will not be able to induce differences between Muslims.” He also said that had the plan for a joint commission of Sunni and Shiite scholars been formed, as was agreed upon during his 2010 visit to Saudi Arabia, it could have toned down extremism in the region.

Current tensions between Saudi Arabia and Iran were exacerbated by the 2003 fall of Saddam Hussein in Iraq and Iran’s growing regional influence. In February, Rafsanjani’s website blamed former President Mahmoud Ahmadinejad for ruining relations with Saudi Arabia in 2008 by publishing a false report against the country that soured relations. Regardless, since 2011, Iran’s support for Assad in Syria and Saudi Arabia’s support for opposition and Islamist groups pushed national and sectarian tensions to new and perhaps irreparable levels.

The former deputy minister of Foreign Affairs for International and Legal Affairs of Iran, Gholamali Khoshro, wrote in an op-ed in Reformist paper Armand Daily that with the election of Rouhani, Iran and Saudi Arabia have an opportunity to form a relationship “based on respect and mutual cooperation.” He wrote that Saudi Arabia’s problem with respect to Iran is viewing Iran as a rival and Iranian influence as detrimental to its own. He added that now that the United States is decreasing its presence in the Middle East, instead of countries in the region spending billions of dollars on arms, it will better serve their interests to increase their cooperation with Iran.

Rafsanjani's website also covered the reactions to the picture. A short note read, "The publication of this picture, which shows one of the highest signs of respect in Arabic greeting, received various responses."