The cooperative supermarket, together with the social bank, are first steps in a long-term plan by Israeli social justice activists to make the public into "educated consumers." 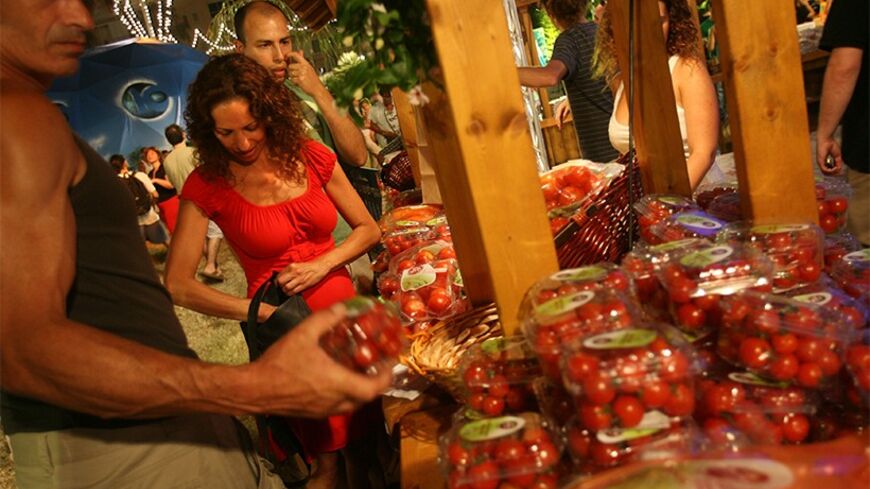 On the morning of April 14, less than 12 hours before the traditional Passover holiday dinner, a quick visit to a supermarket called Shelanu (Hebrew for "Ours") in the east Bitzaron neighborhood of Tel Aviv reveals little activity. The few shoppers move lethargically among the aisles. Not a single one of them, by the way, is one of 500 members who each paid 1,000 shekels ($290) to join the social-economic cooperative founded at the end of 2011, because it has yet to start an intensive membership drive.

Not far from there, at a huge chain supermarket, it's mayhem: carts laden with produce roll through the massive parking lot, sometimes more than one cart to a customer. Israelis have not yet changed their consumption habits, despite their anger at the large retail chains. They refuse to stop buying there, not even on "Supermarket Free Day" declared this year on April 1.

A comparison between the large markets and the cooperative Shelanu store is like comparing a Chihuahua to a Great Dane. Shelanu takes up only 160 square meters (191 square yards), while the large chain stores are spread out over about 5,000 square meters (5,980 square yards). Some of them offer as many as 20,000 different products, an order of magnitude more than the number offered by Shelanu.

At the cooperative store, no one seems bothered by the quiet Monday. A worker said, “Sunday was actually the store's best day since it opened this past January — four and a half times better than an average day, and three times better than an average Friday. But our aim is not to reach massive sales. The nature of the shopping here is different, and the customers are different. The small number of products and the inclusion of small manufacturers is an advantage, not a disadvantage. The aim is to raise awareness of our set of values."

This set of values is not what one might expect. The cooperative project was set in motion by the social protest of 2011, but while the protest targeted the skyrocketing cost of living and the price of cheese (prompting the name “cottage cheese protest”) and other consumer goods, at Shelanu, the prices are not considerably lower, in most cases, than those of the chains.

"The cooperative isn't intended to reduce prices, but to teach educated consumerism and constitute an alternative," explain its founders, who asked that their names not be used. "If our clients are not members of the cooperative, that just encourages us. It proves people come to buy because they identify with the vision. Regular customers report that their expenses on food shopping have gone down, even though the prices are similar, because now they only buy what they need. The volume of the retail market in Israel is 33 billion shekels [$9.5 billion], and people throw out 30% to 40% of what they buy. That's 10 billion shekels [$2.9 billion] a year. Our aim is to teach wise consumerism at eye-level. The supermarket is not just a business, it's an educational system."

The social protest seems to have died out over the past three years, and people have returned to their comfortable despair, but the cooperative folks understood at the same time that the cost of living was not the main issue, but rather ownership. The moneyed owners were each making too much profit for one person.

"This has been a time of creation and evolution," they explain at Shelanu. "The protest created a different consciousness, according to which you have to place demands on yourself to take initiative, to form a community, to produce change." It will take time for the Israeli public to internalize this concept. Israelis have a hard time understanding how becoming the collective owners of a business — a bank or a supermarket, for example — creates a more positive model.

The Shelanu cooperative isn't content with just a supermarket. This is only an experiment to inform additional cooperative enterprises, chief among them a credit union and the establishment of a cooperative pension and provident fund. Their aim, they repeatedly stress, is not to offer the lowest prices, but to teach the public about the wise handling of one's finances.

The cooperative Ofek bank ("horizon" in Hebrew), established in 2012 and scheduled for a 2015 launch, does intend to offer lower costs.

"Our policy is not determined by the need to provide the owners with a maximal return at the end of the year, because the customers are the owners," says Amir Ya'akobi, in sales manager at Ofek. "The cumulative bank profits, after we break even and achieve stability, will be returned to the owners, who are the customers, not through a dividend but by increasing the interest on deposits, lowering interest on loans and reducing the rates of bank charges."

The bank started recruiting members in November 2013, but enrollment is still slow: Only 1,700 shares have been sold, for 3,000 shekels ($864) each, out of the 30,000 that must be sold for the bank to establish a sufficient customer base.

Eitan Davidovich, a 61-year-old Israeli businessman from the locality of Givat Ada, bought a bank share for himself and his wife. He thinks Ofek is not doing enough to persuade others to join. He claims, "To make this idea accessible to the wider public, you have to give the early joiners an additional incentive."

Ya'akobi rejects this theory out of hand, saying, "It takes time for people to change their thinking, but the pace is good and we're optimistic. People ask challenging questions, but at the same time voice their support for us."

Davidovich holds the same view as that of the Shelanu cooperative, according to which education and limiting the power of capitalists is more important that reducing prices. He says, "There's no consumer education in Israel, and as a social bank, the educational agenda will be a central component. What leads the Israeli economy today is money, as if there weren't any people involved. At the bank, the highest pay will not be more than 10 times the lowest. That's how a society should function. This bank will put others to shame."

For the time being, Israelis are suspicious enough even about buying cheese, not to mention investing in a new bank.

"People want low costs," sums up Assaf Zimring, an economics professor at Michigan University. "If a cooperative bank truly offers high interest on deposits and low interest on loans, everyone will rush there. We see this is not the case. In the United States, these banks survive, but they don't become huge. Walmart cracked the retail system, perhaps through abuse, which made them huge thanks to low prices. Cooperative enterprises haven't managed to do that."