Twenty years after the Rwandan genocide, Israel and Rwanda's relations reflect the changes each nation has undergone, with Rwanda taking after Israel in dealing with a genocide and building a promising future. 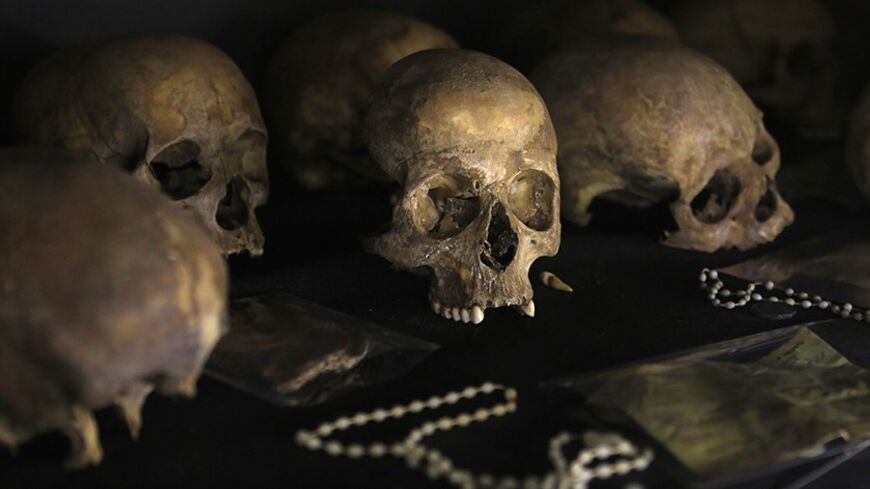 Preserved human skulls are seen on display at the Kigali Genocide Memorial Center, as the country prepares to commemorate the twentieth anniversary of the 1994 genocide, April 5, 2014. - REUTERS/Noor Khamis

Beylanesh Zevadia returned on April 6 to Kigali, Rwanda's capital. The young ambassador visits Kigali every two or three months, since as part of her role as the head of Israel’s mission in Ethiopia, she also serves as the nonresident ambassador to Rwanda. This time, Zevadia came to the land of “a thousand hills” to participate in the main memorial service marking 20 years since the genocide.

Zevadia first arrived in Rwanda two years ago, to give her writ of appointment to the president, Paul Kagame. Since then, she has attended to the sensitive and unique relationship between the two nations. This bilateral relationship, says Zevadia, enables Israel and Rwanda to share with each other their practical experience in taking confidence-building steps and reconciliation efforts, such as at the UN conference that was held in Addis Ababa in February to mark the genocide. An Israeli delegation took part in the conference. Another example is a series of workshops held a few years ago at the Yad Vashem Holocaust Museum in Jerusalem, with the participation of survivors of the genocide in Rwanda.

Israeli citizen Tali Nates has lived in Johannesburg, South Africa, for many years now, but her primary occupation is connected to Israel and Rwanda. In her role as the director of the Holocaust and Genocide Foundation, she frequently accompanies delegations of students to Kigali. She tells Al-Monitor about a new and unique program established by the foundation to train 120 volunteers, among them survivors of the genocide in Rwanda. The training lasts four months, after which the volunteers are expected to speak at various schools in Africa; this program is similar to that of South African Holocaust survivors who volunteer to recount in front of young people at schools and universities their struggle during the Holocaust.

Nates also runs a support group for Rwandan survivors. They have gathered for a number of years now, every three weeks, to receive social and psychological support. This program, she says, was created based on the experience of the Israeli organization Amcha — a center for emotional and social support for Holocaust survivors and their families. Nates and her colleagues in this project also participate in the memorial services in Kigali this week.

Tragedies cannot be compared, and so too are the Jewish and Rwandan reconciliation processes essentially different, especially in light of the fact that the genocide in Rwanda was planned and executed by Rwandans against Rwandans. Nonetheless, Rwandans feel a special kinship with Israel. Not just in a historical-emotional sense but also in a contemporary sense, of a nation that insists on freeing itself from the position of a victim toward a new future.

In the years following the genocide, a number of Israeli diplomats contended that Rwanda was trying to claim the word “Shoah” to gain international recognition for the Rwandan genocide. In Israel some adamantly emphasized the uniqueness of the Holocaust, which cannot be compared to any other historical tragedy. This tension in the relationship between the two countries has dissipated in the course of time, and has made way for both educational and economic cooperation.

A senior Rwandan diplomat recently told me with pride about how Kigali is transforming. “Anyone who visited three or four years ago wouldn’t recognize the city,” he said. “The dirt roads have made way for modern asphalt roads, tall buildings are rising every day, hotels are growing in the center of town; you can connect to the Internet in the lobbies of these hotels, there are restaurants on every corner. It’s a different city.” In his view, Rwanda should open an embassy in Israel “as of tomorrow.” He adds, “Our doors are open and waiting for your technology.”

Last year, Rwanda’s foreign minister confirmed the intention to open an embassy in Tel Aviv, and the Foreign Ministry in Jerusalem has affirmed that Kigali has hinted that it indeed intends to open a presence in Israel in the next few months. For its part, Israel does not intend to open an embassy in Rwanda soon. The Deputy Director for African Affairs at the Foreign Ministry, Avi Granot, emphasizes that the economic relations have greatly strengthened recently between the two countries, but explains that the current budget simply does not allow the opening of an embassy for the moment.

Rwanda sees itself in many respects as the “Israel of the African continent.” It’s a small country on a huge continent, with few natural resources. The terrible tragedy it experienced is still present at every turn in the lives of Rwandans, but has not prevented the nation from rushing forward. Rwanda has turned its back on its past and French is spoken less and less. Five years ago, Rwanda joined the Commonwealth of Independent States and has made English into its second language, after Kinyarwanda.

The Israeli presence in the country is still small, but Israeli businessmen and high-tech companies are trying their luck there in the fields of media, the Internet and infrastructure. The country is growing fast, and Israeli companies are selling Rwanda paramedical equipment, curricula software and, best of all, solar energy. The Israeli company Gigawatt Global, headed by Yosef Abramowitz, is building a field for the production of solar energy near Kigali, which is supposed to supply 8% of the country’s electricity consumption.

This project, which combines Jewish social responsibility with advanced Israeli technology, is the first of its kind in Africa. It is located on the grounds of an orphan village established by the late American philanthropist Anne Heyman, keeping with the model of the children’s villages founded in Israel for the Holocaust's orphans in the first years of the state.

President Paul Kagame has visited Israel several times in recent years. Actually, he visited Israel while still in the role of vice president, and as president of Rwanda he has visited twice: in 2008 for the 60th anniversary of the country, and he also participated in the Presidential Conference convened by Shimon Peres in 2013.

As he sees it, Israel is a sister to his country in grief, but also, and maybe primarily, for him Israel is the “start-up nation” — a model that Rwanda strives for.