Both Israel and Russia value their growing strategic relationship. 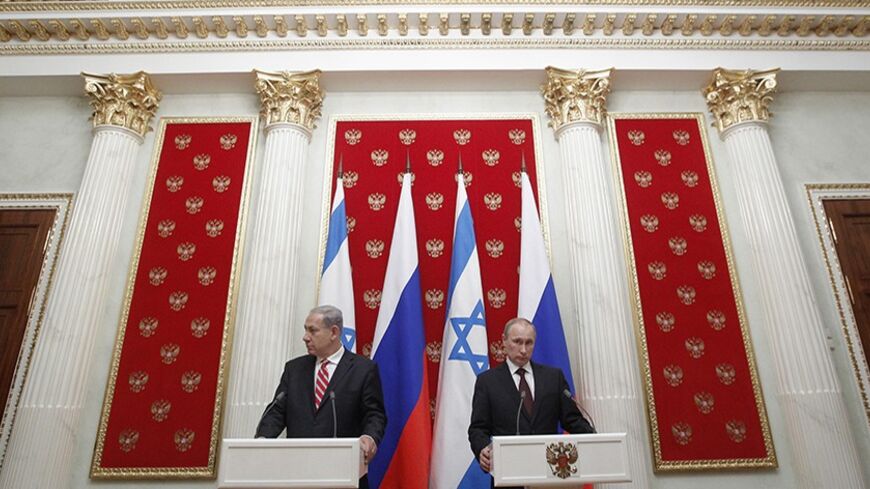 US Secretary of State John Kerry’s call for a "reality check" in the Middle East peace process and Kerry’s upcoming April 9 meeting with Israeli Foreign Minister Avigdor Liberman in Washington have re-energized speculation about whether Washington will intensify, or take a step back, from its efforts to broker a peace deal between Israelis and Palestinians.

Yet, Israel’s evolving relationship with Russia — recently highlighted in the Netanyahu government’s decision not to vote on a March 27 UN General Assembly resolution on the situation in Crimea — has received considerably less scrutiny.

Of particular interest is just how unified Israel’s large Russian-speaking population really is and whether Russia’s annexation of Crimea could expose serious rifts in a community united by language but not by nationality.

Israel was far from alone in refusing to support the General Assembly resolution on Crimea, which did not actually criticize Russia’s annexation (or even refer to Russia’s actions) but instead urged “all states to desist and refrain from actions aimed at the partial or total disruption of the national unity and territorial integrity of Ukraine” and called upon “all states, international organizations and specialized agencies not to recognize any alteration of the status of the Autonomous Republic of Crimea and the city of Sevastopol.”

Syria rather predictably voted no (with Russia and nine others), while Egypt and Iraq abstained (with 56 others). Twenty-four countries didn’t vote at all, including Israel, the United Arab Emirates and — interestingly — Iran. Still, adding these up, some 93 countries did not support the resolution and just 100 supported it (including Saudi Arabia, Qatar, Jordan and Libya, for anyone keeping track).

While a recent strike at Israel’s Foreign Ministry may have provided a convenient excuse for not voting, the strike in itself seems a poor explanation for the decision — after all, if no one at Israel’s UN Mission in New York could vote, the Foreign Ministry could have dispatched someone from its headquarters. Likely more significant is the Israeli government’s cautious attitude toward expressing a clear opinion on Russia’s annexation of Crimea, illustrated in a mild statement a few days after Moscow’s troops moved in. The statement said merely that Israel was “following with great concern events in Ukraine” and “expects the crisis in Ukraine to be dealt with by diplomatic means and to be resolved peacefully.”

Israel is perhaps not in the strongest diplomatic position to criticize Russia’s actions in view of its own forays into neighboring states, but the Israeli government also looks unwilling to confront Moscow over Crimea. This makes sense given Israel’s generally cooperative relationship with Russia, based on the large and politically influential Russian-sepaking population in Israel represented by Liberman among others (not long ago, Israel’s government included for post-Soviet Russian-speaking ministers), growing economic ties including a proposed free trade agreement, substantial tourism (Russia is second after the United States as a source of 600,000 tourists who visited Israel last year) and similarly unconstrained approaches to combating Islamic extremist terrorism that has led to tacit support for one another’s policies, including Russia’s wars in Chechnya. Vladimir Putin has made two visits to Israel as Russia’s president — double the number of trips by US President Barack Obama, though Putin has of course been president nearly twice as long.

Reflecting this relationship, Israel was deferential to Russia’s sensitivities during Moscow’s 2008 war with Georgia, halting its arms trade with Georgia. Georgia’s then-Defense Minister Davit Kezerashvili had cultivated Israel as a supplier; he was born in Tbilisi to Jewish parents who moved to Russia and then to Israel in 1992 before he returned to Georgia. Before the cutoff, Israel had delivered drones and rocket launchers to Georgia, among other items.

Israel’s accommodating attitude is widely regarded as having contributed to then-Russian President Dmitry Medvedev’s decision to suspend the delivery of already-contracted S-300 missiles to Iran in 2009.

Russia’s annexation of Crimea puts Israel in an uncomfortable position for several reasons. Internationally, while Israel’s relations with Russia are important, its ties to Ukraine are not inconsequential. Neither Russia nor Ukraine is a truly major trade partner, and Israel’s trade with Ukraine is not far behind its trade with Russia. Trade with Ukraine has been expanding rapidly, though the balance favors Ukraine, and Israel has been negotiating a free trade agreement with Ukraine for several years — the latest round of talks took place in November 2013. Ukraine is also a leading source of tourism, though its annual volume of visitors to Israel is only about one-fourth of Russia’s.

Moreover, Israel’s emigre population from the former Soviet Union is not monolithic. In fact, Israel’s Central Bureau of Statistics reports a larger number of immigrants from Ukraine than Russia between 1990 and 2012, with 165,901 from Ukraine and 143,998 from Russia, though a large majority of immigrants in the 1990-1999 period did not specify a country of origin within the former Soviet Union (and immigrants in the peak years of 1990 and 1991 were leaving the USSR before Russia or Ukraine became independent).

As a first or second language for virtually all immigrants from the former USSR in the immediate post-Soviet period, Russian would naturally unite them on their arrival in Israel; it was a common language for a large group that did not speak Hebrew. Nevertheless, even in the Soviet Union, speaking Russian did not erase other national identities. Moreover, though Russians and Russian-speaking Ukrainians likely form the largest group of immigrants by a significant margin (Israel’s Central Bureau of Statistics does not publish statistics on immigrant languages online), sentiments within immigrant communities are clearly divided. One example is a recent unsigned news report on the Russian-language Israland website that describes Moscow pursuing a “Crimea scenario” in eastern Ukraine in which “separatists” are demanding that “regional authorities take a decision on conducting an absolutely illegal referendum on the annexation of the Donetsk Oblast to the Russian Federation.” This Russian-language opinion is not Moscow-friendly.

Moreover, even as Israel has refrained from criticizing Moscow’s annexation of Crimea, the Israeli government has also provided only minimal support for the Kremlin’s narrative in justifying its action: the rise of dangerous neofascist and anti-Semitic Ukrainian nationalist forces. In a new report on global trends in anti-Semitism in 2013, Israel’s Ministry for Jerusalem and Diaspora Affairs makes little distinction between anti-Semitism in Ukraine and in Russia itself, stating that “in Russia and Ukraine, there is an especially prominent trend of the anti-Semitic propaganda, expressions of people in power and the media, and attacks against Jewish sites, being part of the lives of the local communities without the discussions usual in the West regarding the status of Israel and its actions.”

Jewish leaders in the former Soviet Union are simultaneously engaged in an energetic dispute over the extent of anti-Semitism in Ukraine, as well as Russia’s top Rabbi Berel Lazar assailing Ukrainian Jewish leaders for their attacks on Russia’s annexation of Crimea.

The World Jewish Congress — which includes two Russian and three Ukrainian representatives in its executive committee — has joined in, with a statement expressing concern about both Ukrainian nationalism and “exaggerated accounts” of anti-Semitism in Ukraine.

Disagreements among Jewish communities in the former Soviet Union and even among Russian-speakers in Israel seem unlikely to derail Israel’s generally cooperative relationship with Moscow, which benefits Israel not only bilaterally but also strategically.

For Israel, Russia has too many connections to the Middle East — in Syria and Iran, with the Palestinians, and increasingly with Egypt too — to be safely ignored, much less gratuitously annoyed. The Ukraine crisis can’t be making Israel’s interaction with Moscow any easier — and Israeli officials surely hope that it will all go away soon.