The Iranian oil minister's refusal to confirm an alleged Russian oil-for-goods program has increased speculation about the controversial deal condemned by US officials. 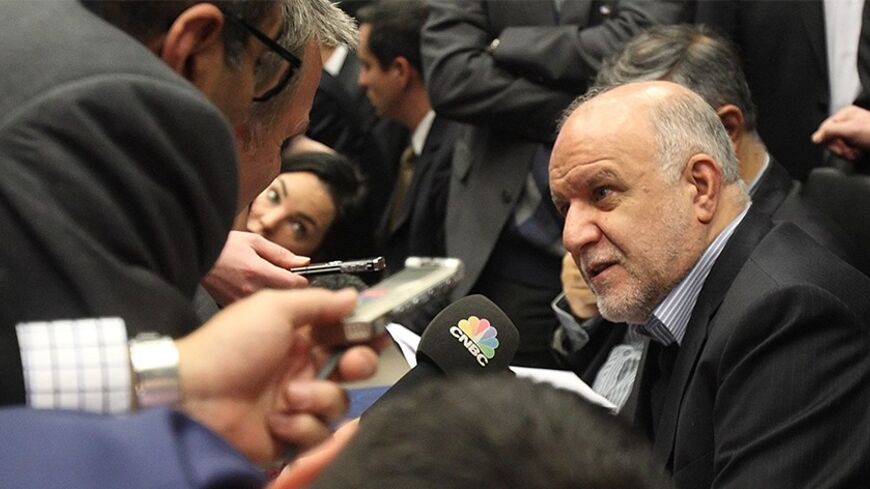 Iran’s oil minister refused to answer questions about reports of a $20 billion oil-for-goods program with Russia.

“I will neither confirm nor deny this topic,” Bijan Zanganeh told reporters when asked at the funeral of former president Mohammad Khatami’s wife’s father. When asked if the deal exists at all, Zanganeh said, “We do not even have a bartering deal.”

Zanganeh’s contradictory responses shows the sensitivity of Iranian officials about speaking of this deal. Most Iranian media outlets chose the “neither confirm nor deny” comments for their headlines. Some did not even cover his response that a bartering deal does not exist.

The Russian business daily Kommersant has also reported that Russian ministers are currently reviewing the controversial deal. The Russian ambassador to Iran had confirmed the news to Iranian media in March, however.

According to Russian and Iranian sources that spoke with Reuters, “Moscow and Tehran were discussing a barter deal that would see Moscow buy up to 500,000 barrels a day of Iranian oil in exchange for Russian equipment and goods.”

This export level reportedly exceeds the limit defined by the interim nuclear deal between Iran and the five permanent members of the UN Security Council plus Germany. According to the Associated Press, the six-month interim deal “allows Iran to continue exporting a total of 1 million barrels a day of oil to six countries: China, India, Japan, South Korea, Taiwan and Turkey.” However, since Russia “wasn’t an existing customer of Iran’s petroleum industry,” it was not included in the deal.

US officials have condemned the deal. Secretary of State John Kerry told the Senate Foreign Relations Committee that the deal “could trigger US sanctions.” Senators Bob Menendez and Mark Kirk wrote to President Barack Obama, urging him to “put Iran on notice.” Senator Bob Corker said, “The administration must be prepared to restore all sanctions if Iran cheats.”

Russian Deputy Foreign Minister Sergey Ryabkov rejected the warnings from US officials. He told the Russian news agency RIA Novosti that an "increase of trade between Iran and Russia is a natural process and from a political or economic vantage point does not create any problems for either country.” He added, “Russia plans to expand its trade with Iran and it rejects American threats about putting more sanctions” into place. He called unilateral US sanctions “illegal.”

Iranian officials have been silent on the issue. Iranian media has mostly reported on foreign coverage on this topic. Since international sanctions first targeted Iran’s oil exports and banks, Iranian exports have dropped from over 2 million barrels a day to just under 1 million.