Ahmadinejad’s return may be boost for Rouhani

The former Iranian president seeks to capitalize on the frustration of conservatives with Rouhani’s economic and foreign policies. 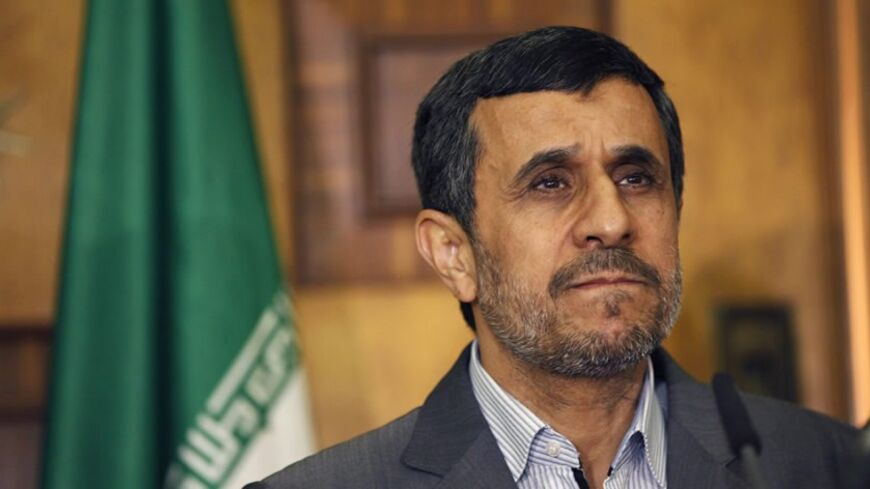 This is why, eight months after he left office, his supporters are embarking on a public relations campaign to facilitate his return.

According to the Tehran-based Shargh publication, part of this PR campaign includes setting up a media group. The name of this group is an acronym, HOMA, which is derived from the Persian term Havadarn-e Mahmoud Ahmadinejad, meaning “Supporters of Mahmoud Ahmadinejad.” This group consists of bloggers and news sites sympathetic to Iran’s former president.

Sites such as Dowlat-e Bahar, Ayin News and Rais Jomhur-e ma (Our President) are reported to be part of this group. This is in addition to another site called 72 Square, named after the roundabout in Tehran's Narmak neighborhood where Ahmadinejad lives. These sites have already started promoting Ahmadinejad's achievements, while attacking President Hassan Rouhani's policies as well as Ayatollah Akbar Hashemi Rafsanjani, whom Ahmadinejad supporters see as Rouhani's backer. Ahmadinejad has also set up a new Twitter account.

As part of Ahmadinejad’s PR campaign, his supporters are trying to endear him to Supreme Leader Ayatollah Ali Khamenei. In some of the pro-Ahmadinejad sites, the supreme leader is referred to as “Imam Khamenei,” instead of Ayatollah Khamenei. Religiously speaking, the title of imam is much higher and important than the title of ayatollah. This is in addition to claims by supporters that Ahmadinejad has returned to politics at the request of Iran's supreme leader.

Based on the content of his supporters' attacks against Rouhani, it seems that Ahmadinejad wants to capitalize on the expected public outcry after the implementation of the next round of subsidy reforms in Iran, which is scheduled to take place this week. With electricity, food and fuel prices expected to go up because of these reforms, Ahmadinejad is hoping that the public will blame Rouhani, and to yearn for his return.

In all likelihood, Ahmadinejad also hopes to capitalize on the frustration and anger of the conservatives who feel left out and isolated from the nuclear negotiations. Ahmadinejad is hoping that they will now look to him as a leader to lead the backlash against Rouhani, if the talks fail, or if the conservatives are unhappy with the terms of a possible deal between Iran and the P5+1. The pro-Ahmadinejad site Rais Jomhur-e ma is already attacking Rouhani after reports emerged that Iran has agreed to modify the IR-40 reactor during the negotiations with the P5+1.

Despite his aspirations, Ahmadinejad should not expect an easy return to politics, as after eight years in office he left behind many enemies. There have already been attempts to summon him to court over charges stemming from his previous term. Meanwhile, in March, his former vice president Mohammad Reza Rahimi was indicted on corruption charges.

In fact, his return may end up being a blessing for Iran’s current President Rouhani.

Such a claim may sound counterintuitive, as the two politicians come from different poles of Iranian politics. To start with, Ahmadinejad is a hard-line conservative while Rouhani is a moderate. There are vast differences of opinion between the two in their foreign and domestic outlook. So how can the return of Ahmadinejad be good for Rouhani?

When a pyromaniac who has burned down numerous buildings in a block returns to the neighborhood, any firefighter standing next to him will look good and heroic, even a half-competent one. Ahmadinejad was such a bad and unpopular president that next to him, Rouhani will look great. And the more visible Ahmadinejad is in Iranian politics, the easier it will be for people to make such a comparison. Since leaving office in August 2013, Ahmadinejad has been relatively quiet. But that seems to be over. Ahmadinejad is making a comeback, and one of the lessons learned from Ahmadinejad's eight years in office is that Mahmoud loves the limelight.

There is also the IRGC (Iran’s Islamic Revolutionary Guard Corps) factor. Yes, both Ahmadinejad and the leadership of the IRGC belong to the conservative wing of Iranian politics. And both have their own reasons to dislike Rouhani. However, another lesson we learned from Ahmadinejad's eight years in office is that he is a very conflict-prone politician. During his term in office, he fell out with everyone, including the IRGC, which initially supported him. Now that Ahmadinejad is making a comeback, it is only a matter of time before he falls out with the IRGC leadership, again. That would be great news for Rouhani.

Eight years of Ahmadinejad in office taught us another thing: Whatever he touches, turns to dust. This is likely to include his return to Iranian politics. If anything, Rouhani has good reason to welcome Ahmadinejad’s return to the limelight, because with Ahmadinejad next to him, Rouhani will look much better.