The Egyptian government's decision to close down the movie "Halawet Roh," considered by critics as racy and salacious, and send it for further censorship review has provoked a broader debate about censorship red lines. 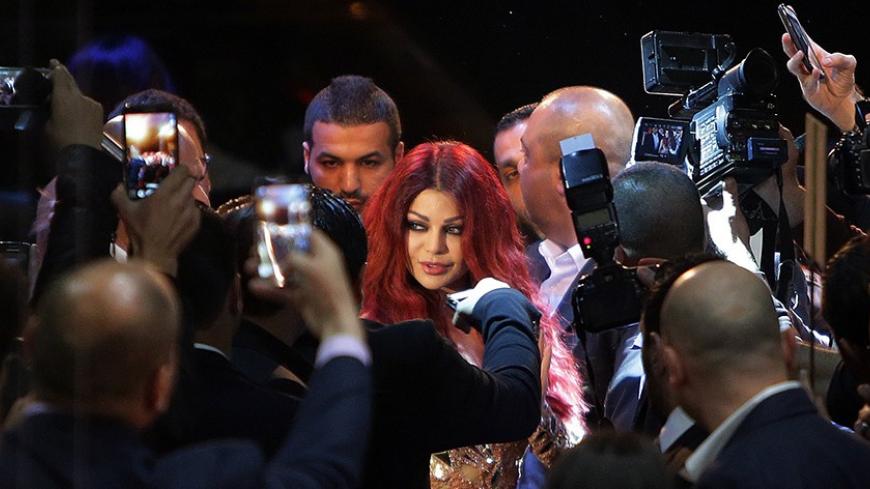 Lebanese pop star Haifa Wehbe arrives for the premiere of the movie "Halawet Roh" at a movie theater in the town of Dbayeh, north of Beirut, April 8, 2014. - AFP PHOTO/GETTY IMAGES/Joseph Eideid

According to news website Sada El Balad, the child actor Karim has been unable to leave his house following attacks on him in the streets. His mother claimed that in one incident the child was spat on and called an “apostate” who had to be fixed up by his parents. While the child’s presence in the overall film was criticized, much of the controversy Karim faced was due to erroneous information that spread that he acted in a one-on-one rape scene with Wehbe.

The film reportedly earned 1 million Egyptian pounds ($143,000) in its first week, a substantial figure for a relatively off-season release.

The cabinet met on April 19 with figures from the cinema and television industries to discuss the decision, and one of the attendees informed me that the predominant position of the attendees was one of support of the government decision. They included figures such as prominent Egyptian actor Mohammed Sobhy, who was one of the most vocal supporters of the government decision in the media.

Outside of the meeting, there was more of a divide. For example, the Egyptian Front For Creativity, a coalition of Egyptian artists and artistic entities, and the three main artistic unions issued statements denouncing the decision as unconstitutional, a threat to freedom of expression and to the embattled cinema industry, and said the act was unlike anything done at the height of the Muslim Brotherhood’s rule, while highlighting that the film was given the green light by the head of the censorship board, the authority tasked with the final say on the subject.

Ahmed Awwad, the head of the censorship board, who was appointed in September, announced his resignation in protest of the decision. Awwad has been hailed by the industry as one of the most liberal censors to ever sit at the helm of the board. Under his tenure, a host of varyingly controversial movies were released over the past few months, either with no cuts or reportedly very minor ones. One movie, "La Mo’aakhza" (Excuse Me) — the story of a Coptic boy pretending to be Muslim in his new public school to avoid trouble — had long languished in censorship, despite being predominantly financed by a state grant in the first place, only for Awwad to green light the movie without any of the previously recommended cuts. Also notably, two other controversial movies were released during his tenure: "Al-Molhed" (The Atheist), a movie about a young man “struggling” with his atheism, and "Asrar Aa’iliyya" (Family Secrets), about a young man coming to terms with his homosexuality.

Though both movies espoused a conservative viewpoint, with one being squarely against atheism and the other seeing homosexuality as something that is “caused” and is “curable,” there were significant calls for both movies not to be released in the first place, fearing that such direct and “humanizing” portrayals of the subject matters would have unintended negative consequences on society. Both movies performed poorly in the theaters, both due to low interest as well as some aversion by cinema houses to actually exhibit the movies. In another recent landmark controversy, the American film “Noah” was given the green light to be shown in theaters, despite the protest of Al-Azhar and other conservative voices. Islam bans the direct visual portrayal of recognized prophets, but the movie was released citing the “civic state” and freedom of expression being protected by the new constitution. Some reports suggested that the rest of the censorship board had recommended cuts from Wehbe’s movie, only for Awwad to decide to release the film without a single cut.

The debate over Wehbe’s movie and censorship at large, as well as the fact that the movie was pulled by executive decision, comes with a lot of political significance at this particular point in time in Egypt. The current military-backed political order in the country has been established over the idea that the ouster of former President Mohammed Morsi and the Muslim Brotherhood almost a year ago was necessary to stop Egypt from becoming another theocratic Iran or — ironically, one of the biggest supporters of the current administration — Saudi Arabia.

Pulling a movie from theaters in the name of protecting public morality obviously raises many questions and comparisons as to why would that be OK under the current regime but not perhaps under the Muslim Brotherhood (Al-Azhar has, as expected, also been strongly against the film, with one leading scholar calling for the filmmakers to be tried). The Egyptian Creativity Front’s statement even alluded to a case that received much media and public denunciation following an on-air controversy that arose when the former Brotherhood head of the Egyptian Shura Council, Ahmed Fahmy, boarding an EgyptAir flight, reportedly protested a classic Arabic movie being exhibited because it contained a kiss. Fahmy expressed his disapproval of the movie being shown and the film was stopped, only for it to be resumed due to protests from the other passengers and the flight crew, according to the reports, with the screens facing Fahmy and his delegation closed. EgyptAir then issued a statement in which it reaffirmed the film would remain on the in-flight entertainment lineup.

The situation also raises the profound question of what exactly is the acceptable “red line” for what can be exhibited and what cannot, as well as who decides that. The question becomes even more substantial, especially as this is certainly not the first movie featuring erotic content or scantily clad actresses over the past years, with many films coming from the same producer as Wehbe’s feature, all of which pretty much made it to the theaters — amid the usual critical calls for “good and clean cinema” to be produced in response to such movies — and in many cases to record ticket sales.

The debate also brings forward once more the realization that, despite all the claims that Egypt now stands against theocratic government and that Egyptians have revolted against the Brotherhood, the reality is that the country remains very much a conservative country. A Baseera poll showed that 67% of respondents said they supported the government’s decision, with 24% either neutral or disinterested, and 9% against. While across age segments the prevailing sentiment was an endorsement of the government’s pulling the movie, respondents less than 30 years of age were (relatively) the most against the decision at 14%, compared with only 3% of respondents over 50 years of age being against the decision, highlighting some degree of an age divide. Also remarkably, higher-educated respondents endorsed the decision more than the less educated: 83.5% of college educated respondents were supportive of the withdrawal of the film, with 4.1% against the decision and 12.4% without an opinion. Those with middling education levels or less had the highest apathy rate to the question at 33.1%, but also had the highest disapproval rate of the decision at 10.9% and the lowest support of the decision at 56%.

In all events, the movie is likely to be released again with a few scenes cut. But this only symbolizes the start of what might end up being the most defining and profound chapter in the long-protracted debate over freedom of expression in the country. It is also somewhat of a microcosm of what the interplay between the various and often conflicting components of the country’s culture and politics could mean for Egypt’s unique national identity in, and beyond, a revolutionary era.