Enough European jihadists are fighting for the Islamic State of Iraq and al-Sham (ISIS) that the radical group has created French- and German-speaking brigades. 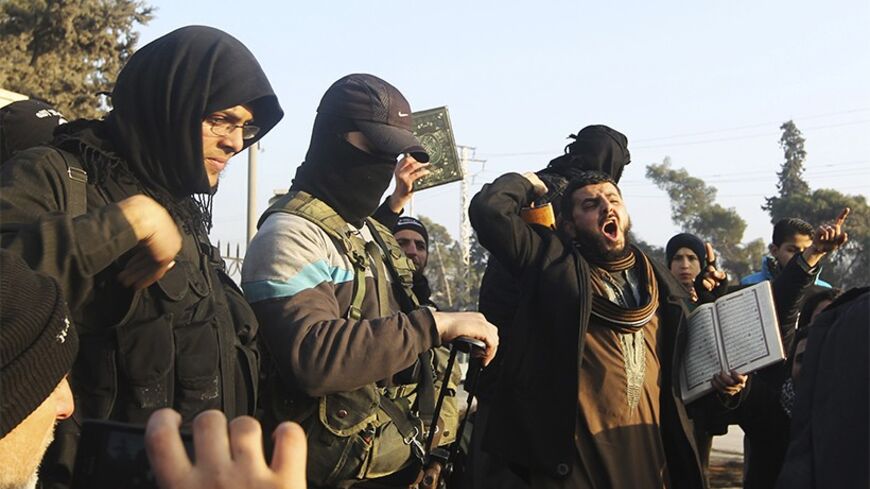 Recent reports in the European press and evidence from social media implicate European jihadists fighting with the Islamic State of Iraq and al-Sham (ISIS) in atrocities committed in the vicinity of Aleppo, in northern Syria. The reports, moreover, suggest that European jihadists in Syria are more numerous than official statistics indicate. Indeed, they point to the existence of entire French-speaking and German-speaking brigades in the Aleppo region.

One Abu Shaheed, a French jihadist interviewed by the weekly Paris-Match in March, claims that there are “at least” 500 recruits from France alone fighting with ISIS, which is merely one of the jihadist factions in Syria. It has lately been involved in an internecine conflict with other such factions, including Jabhat al-Nusra, al-Qaeda's official affiliate in Syria. In a recent study, Thomas Hegghammer, director of terrorism research at the Norwegian Defense Research Establishment, used published estimates from European intelligence services to put the total number of European recruits fighting in Syria at fewer than 2,000. The study estimated the total number of French recruits fighting with all the factions, not only ISIS, at between 200 and 400.

Referring to the French jihadists, Abu Shaheed told Paris-Match, “There are lots and lots of them. The place is covered with French [recruits]. I couldn’t even count them all.” In addition to individual French fighters in other ISIS units, Abu Shaheed said that there are five or six purely French-speaking brigades or katiba, consisting of French and Belgian fighters. He went on to explain that the formation of French-speaking brigades is a necessity, since the French and Belgian recruits ordinarily do not speak enough Arabic to be integrated into Arabic-speaking units. The recruits are known essentially to consist of second- and third-generation descendants of Arab immigrants and Muslim converts.

Abu Shaheed belongs to one such French-speaking unit in the Aleppo suburb of Hraytan. He claims that prior to the withdrawal of ISIS from Hraytan in mid-February, some 200 French or French-speaking fighters had been based there. Hraytan’s European colony came to broad public attention when video emerged in late March of French-speaking jihadists providing running commentary as they gleefully dragged seven or eight bodies to a mass grave using a pickup truck. “In the past, we towed jet skis, motorcycles and quad bikes,” the driver of the pickup says with a wry smile, “now we tow murtads [apostates] and kuffar [unbelievers], those who fight against us and fight against Islam.”

The images were published by Paris-Match and aired by the French news channel BFM roughly at the same time. They were reportedly taken from a series of videos saved on the cell phone of a Belgian jihadist going by the name Abu Omar, the driver of the pickup. Abu Omar confirmed the provenance of the images on his Facebook page, claiming that the videos were “stolen by a Syrian apostate who sold them to French journalists.”

The French media have identified the dead men in the images as victims of a massacre perpetrated by ISIS against civilians and “[non-ISIS] rebels.” Both Abu Shaheed and Abu Omar insist they are all combatants. Virtually all the bodies being towed by the pickup, however, are wearing civilian clothing.

Other footage filmed with Abu Omar’s cell phone appears to document the immediate aftermath of the massacre. See minutes 2:35 through 3:35 of the BFM report. While in this footage most of the victims appear to be civilians, one of them is wearing a jacket with military insignia. BFM describes them as insignia of the Free Syrian Army (FSA). In fact, however, the insignia are the traditional white-on-black of the jihadist banner and the Arabic they feature includes both the takbir and the shahada —“There is no god but God and Muhammad is his messenger.” This detail further underscores that the opponents of ISIS in northern Syria are themselves jihadists, even if some, for tactical reasons, may be willing to assume the FSA mantle.

After withdrawing from Hraytan, the French and Belgian jihadists fell back to the town of Azaz, near the Turkish border. There, on Feb. 14, Abu Omar and his friends filmed yet another “trophy” video. This one reportedly shows them laughing in front of four severed heads in a public square where ISIS is supposed to have regularly conducted beheadings. One francophone jihadist would subsequently post a photo on Facebook showing the four heads arranged around a headless torso at the base of a monument with the words “Azaz City Council” painted on it. He cheerfully comments, “After our arrival in Azaz, the brothers were so happy that they cut up some Free [Syrian] Army and PKK [Kurdistan Workers Party] for us.” The photo has also been posted elsewhere. Two of the victims are clearly adolescents.

The francophone jihadists were not the only Europeans taking trophy shots in Azaz. A photo also surfaced of the German jihadist Mustafa K. posing in front of the same monument while holding what appears to be one of the same heads. A small boy can be seen to his left. The photo was posted on the Facebook page of another German jihadist, the Muslim convert Philip Bergner. The page is not currently available, but screen caps have been preserved on the anti-Salafist German blog Pierre Vogel und seine Welt.

Like their French and Belgian counterparts, Bergner and Mustafa K. are reported to have joined ISIS. Shortly after Bergner posted the photo on Facebook, a commentator urged him to remove it, noting that “outsiders … don’t know that these people [the victims] have raped women, killed children and tortured people.” Bergner’s response can be taken as emblematic of the fanaticism not only of ISIS, but of the Europeans who have rallied to its cause. “They were killed above all for their kufr [unbelief],” Bergner explained coolly, “not for rapes, etc.”

Both Bergner and Mustafa K. come from the Lohberg neighborhood in the town of Dinslaken in western Germany. Indeed, according to the German public broadcaster WDR, no less than seven young men from Lohberg have gone to perform jihad in Syria, where they together form the so-called Lohberg Brigade. Such a high number of recruits from one small neighborhood, which was not previously known as an incubator of Islamic extremism, casts doubt on German intelligence's relatively modest estimate of around 300 recruits from Germany engaged in jihad in Syria.

The difficulty posed by such published intelligence estimates is that governments might have an interest in keeping the numbers down, for instance, to minimize the extent to which their own populations, or segments thereof, have been radicalized. What intelligence agencies know and what intelligence agencies let the public know are, of course, two different matters. Whatever the real numbers are, the latest reports from France and Germany suggest that a problem increasingly acknowledged by European officialdom could be of greater dimensions beyond what is either known or acknowledged.