While the Obama administration has allowed US helicopters to be shipped to Egypt, the question of Egypt’s democratic transition will frustrate deeper ties. 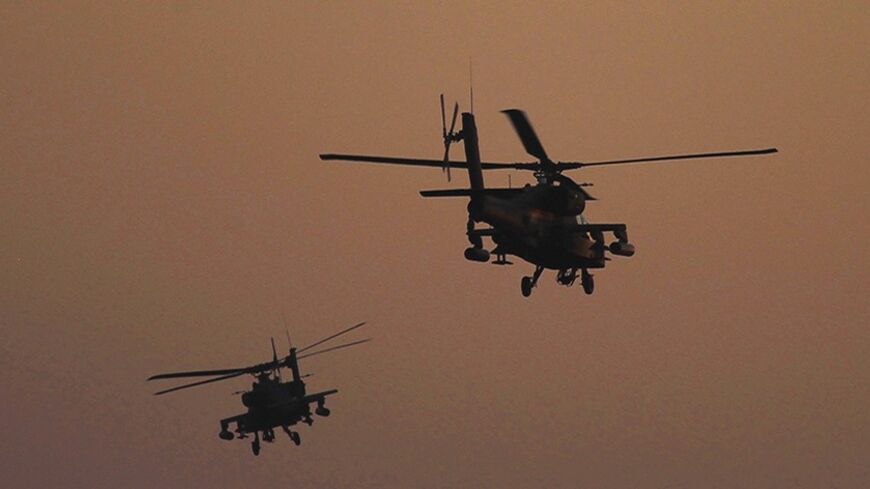 Apache helicopters fly over Tahrir Square during a demonstration to support the army, in Cairo, July 26, 2013. - REUTERS/Amr Abdallah Dalsh

Washington is slowly and tentatively scaling back its embargo on the supply of big-ticket military hardware to the new regime in Cairo. The restrictions were imposed after the July 2013 ouster of President Mohammed Morsi by a military committee led by Field Marshal Abdel Fattah al-Sisi.

The US ban was meant to punish Egypt for deposing the elected Egyptian government and its bloody suppression of pro-Morsi supporters in the aftermath of the coup. Its actions were in large part dictated by US legislation requiring Washington to sanction Egypt for its crackdown on dissent and short-circuiting of the democratic process.

On April 22, the State Department announced that Secretary of State John Kerry "is certifying to Congress that Egypt is sustaining the strategic relationship with the United States — including by countering transnational threats such as terrorism and weapons proliferation — and that Egypt is upholding its obligations under the Egypt-Israel Peace Treaty."

The choreographed announcement, with language conforming to congressional mandates governing the provision of aid, was followed by a Pentagon contribution that was more to the point. Ten Apache helicopters collecting dust in US depots will be released to Egypt for use in its growing counterinsurgency campaign in Sinai. Secretary of Defense Chuck Hagel’s spokesman said, "We believe these new helicopters will help the Egyptian government counter extremists who threaten US, Egyptian and Israeli security."

Arms transfers are the lifeblood of Washington’s relations with Cairo.

One need only glance at the history books to understand the seminal importance of arms in defining Egypt’s international orientation. Gamal Abdel Nasser’s “Czech arms deal” in 1955, signed after the new Egyptian leader was rebuffed by Washington, still stands as the archetypal example of US missteps in the Cold War contest for influence in what was then termed the “uncommitted third” — those trying to dance between opposing demands from Moscow and Washington.

The Pentagon's April 22 announcement about the release of Apaches takes place in an international environment that brings to mind this old and crusty Cold War context. Washington insists that Vladimir Putin’s Russia is an inferior sort of player — a mere regional power unable to play with the big boys, a club where only Washington is eligible.

But President Barack Obama is all too aware from his own frustrating experience that national power is not necessarily the product of a simple calculation of the balance of forces. Trillion-dollar interventions in Iraq and Afghanistan have weakened the US position in the world. Any more “victories” — in Syria, for example, or the Libya model — will add calamity to disaster.

The Cold War is over and will not be repeated, but Egypt today is nonetheless an arena for the newly energized contest between Washington and Moscow. This is an important stage where the relative power of the United States in this new era will be tested. In Egypt, Sisi feeds off the nostalgia for Nasser, including his turn to Moscow for arms and to finance the Egyptian High Dam after Washington’s humiliating rejection. It is fair to guess that Americans have long forgotten these episodes. Not in Egypt, where they remain living history.

Putin’s application of “smart power” in places like Egypt may enable Russia to punch well above its weight. In case someone missed this point, Egypt’s interest in a multibillion-dollar military package poked its head up alongside Washington’s decision to end the Apache embargo.

Unlike Russia, which is clearly out for influence and profit, Washington has created for itself a 21st-century set of standards for Egyptian political behavior, which the Obama administration has already demonstrated it is unable to keep. The classic strategic interest in cultivating friendships with whoever rules Cairo has been made hostage to well-intentioned but nonetheless confusing and hypocritical concerns about Egypt’s ever-questionable democratic credentials. The latter are not without importance, but it has yet to be demonstrated that establishing an externally imposed bar to judge Egypt’s democratic performance has ever worked, and that the benefits of establishing such unilateral standards are greater than the costs.

Today, it is all but impossible to find any Egyptian prepared to commend Washington’s ambiguous effort to restrain the generals. Sisi complains that Washington has “stabbed him in the back.” Erstwhile democrats in the street and the salons accuse Washington of all manner of transgressions — not quite the foundation for constructing a broad base of common interests as the region grapples with demons of all sorts.

Washington, even as it loosens the screws on arms transfers, still appears to enjoy tying itself in policy knots. According to the Pentagon press secretary, “Secretary Hagel told [Egyptian Minister of Defense] Gen. Sedki Sobhy that we are not yet able to certify that Egypt is taking steps to support a democratic transition, and he urged the Egyptian government to demonstrate progress on a more inclusive transition that respects the human rights and fundamental freedoms of all Egyptians.”

Putin has no such qualms. He is reading Machiavelli, not the Universal Declaration of Human Rights. "The Prince" is probably on Sisi’s short list as well. He was Moscow’s guest in February, when he pocketed a political endorsement from the Russian president himself in his bid for Egypt's presidency.

While Washington appears all but immobilized by the conundrum it has created, Putin has no trouble dispatching his arms dealers to Moscow to discuss multibillion-dollar arms deals, including the MiG-35, which has yet to be sold overseas.

Russia and Egypt are talking about stepping up defense cooperation. (Washington canceled the annual Bright Star Exercise after the coup.)

At the end of the day, Washington will find a way around the obstacles it has created so it can maintain relations with the Sisi regime, which will celebrate a victory in next month's national elections. Obama acknowledged this at the United Nations last September, when he admitted that “our approach to Egypt reflects a larger point: The United States will at times work with governments that do not meet, at least in our view, the highest international expectations, but who work with us on our core interests."

Machiavelli could not have said it better.