The Palestinian formula for the resumption of talks with Israel includes discussion of borders issue, which is not only the aim of negotiations but also the only way to sell renewed talks to the Palestinian public. 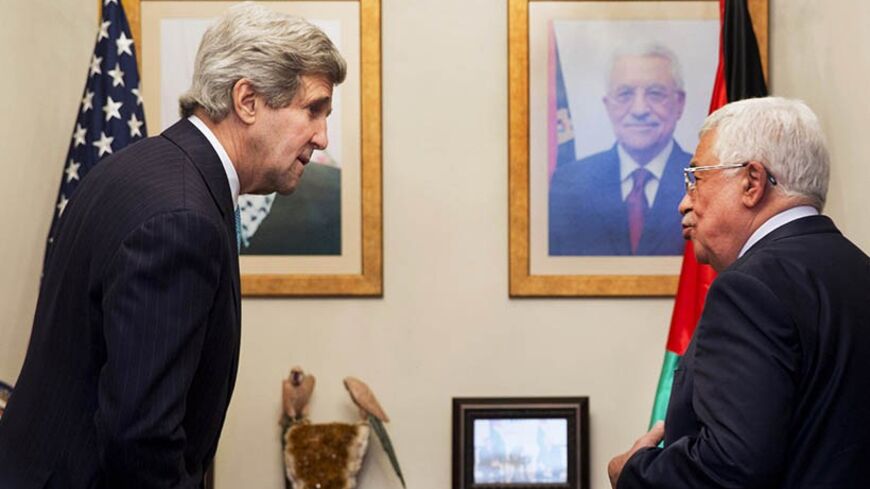 US Secretary of State John Kerry is greeted by Palestinian leader Mahmoud Abbas, during their meeting in Amman, Jordan, March 26, 2014. - REUTERS/Jacquelyn Martin

Hoping to contain the backlash following the signing of international treaties by Palestinian President Mahmoud Abbas, the Palestinian team is looking to restart negotiations by focusing on the issue of the borders of the Palestinian state. In a gesture that is also designed to save face among the Palestinian public and silence critics, Abbas will look to chart real progress and give his team time to get organized by pushing the deadline on talks back to summer 2015.

The Palestinians' “retaliation,” which followed Israeli Prime Minister Benjamin Netanyahu’s refusal to release the fourth batch of Palestinian prisoners, was carried out on the advice of Abbas' close advisers, in particular the head of his negotiating team, Saeb Erekat, who asserted that Israel must be taught a lesson for violating its commitment, according to Palestinian sources.

It quickly became clear that this hasty move, which was designed among other things to strengthen the stature and restore the negotiators’ standing in the public eye, actually hurt the PA and Abbas more than it did Israel. This, despite the fact that US Secretary of State John Kerry placed most of the blame for the crisis at Israel’s door.

A postmortem conducted by the Palestinians revealed that US frustration over the failure of the talks, the threat that the United States might withdraw from involvement in the Israeli-Palestinian conflict and the lack of a diplomatic horizon could bring about the end of Abbas' political route and create chaos in the PA. Having understood this, the Palestinians started signaling that in fact, not all was lost and that there was a genuine and sincere Palestinian desire, despite it all, to renew the negotiations and extend them, at Kerry’s request, by nine additional months.

Messages along those lines were conveyed in recent days to the Israelis and the Americans through several channels, open and secret. The only condition: as long as the Palestinian leader would not be perceived by Palestinian public opinion as having been beaten and bruised and having capitulated to one-sided Israeli actions. Among those conveying this message, in addition to Erekat, were senior Fatah official Jibril Rajoub, Israeli Knesset member Ahmed Tibi and members of the Knesset caucus for resolution of the Israeli-Palestinian conflict headed by Labor Party Knesset member Hilik Bar.

Positive Palestinian messages to the effect that it was possible to find a suitable formula for resumption of the negotiations in a productive manner were also conveyed to the US envoy to the talks, Martin Indyk. According to a Palestinian source, Indyk has been signaling cautious optimism in recent days, since receiving clear messages from Abbas' associates.

A well-placed Palestinian source familiar with the talks told Al-Monitor that during the nine months of negotiations, the Palestinians could not point to progress on even one issue, and therefore Abbas needed the prisoner release as oxygen, as a lifesaver, for continuing contacts. During those same nine months, not a single accomplishment was made with which to silence the critics and opponents of the Palestinian chairman, among them former Fatah official Mohammed Dahlan, who is waiting around the corner for the moment Abbas fails.

Therefore, the Palestinian demand to reach understandings on the border issue, or at least an Israeli commitment to discuss the matter, is essential. That is how Abbas will prove to Palestinian public opinion that he managed to force the other side to stop conducting fruitless discussions, and that is why he agreed to go back to the negotiating table despite what appears to the Palestinian public as “humiliation.”

After all, from the moment Kerry declared the negotiations at the end of July 2013, they were intended in essence to be intensive discussion of controversial issues, including for example the borders of the future Palestinian state.

Do Abbas and his representatives at the talks believe that this is the key that will lead to an agreement? From conversations I have had with many Palestinian sources, not a single one believes that a miracle will occur in the nine months from the start of the second round of talks and that a peace agreement will be signed with Israel. An extension of almost a year, however, will provide Abbas and the rest of the Palestinian leadership additional time to get organized.

In the summer of 2015, the new target date for concluding the talks, another year in the terms of Netanyahu, US President Barack Obama and Kerry will have passed. Abbas, for his part, will have gained another important year as president of the PA. As far as he is concerned, by the summer of 2015 many of the dark clouds currently covering the diplomatic horizon will have dissipated. For example, it will be possible to form a stronger European front in the hopes that the economic boycott of Israel makes its mark and exerts massive pressure on Netanyahu and the Israeli public to reach an agreement with the Palestinians for the sake of Israel’s economy and future.

In other words, the name of the new game is to stall for time. According to the Palestinian postmortem, a single spark of hope, small as it may be, will be sufficient to provide a horizon enabling Abbas and the PA to survive.