In the border province of Hatay, fears mount that Turkey will declare war against Syria after the downing of a Syrian jet. 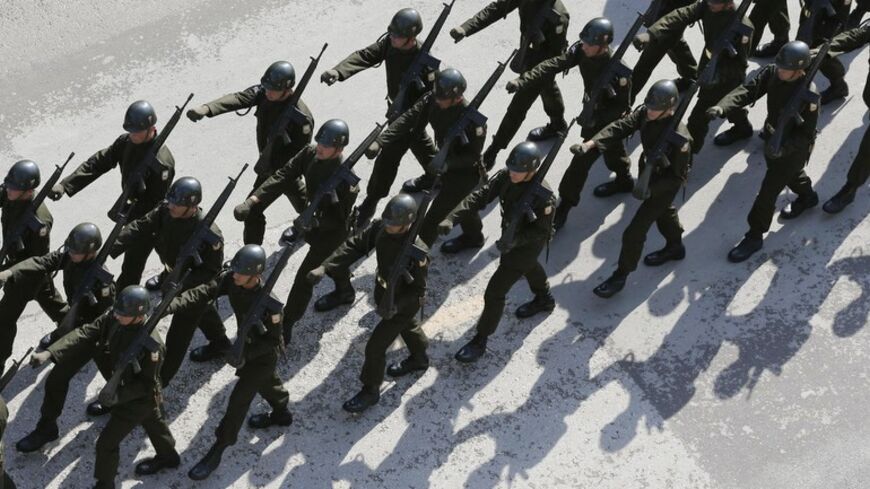 Turkish soldiers march during a ceremony to mark the 89th anniversary of Republic Day in central Antakya, in the southern border province of Hatay, Oct. 29, 2012. - REUTERS/Murad Sezer

ANTAKYA, Turkey — A fisherman’s boat bobs on the sapphire blue waters of the Mediterranean Sea. A stray puppy gambols on a deserted sand beach. In normal times, this small seaside Eden in Turkey’s southernmost province of Hatay would buzz with summer holidaymakers. But the coming season threatens to be different in Meydankoy. “We are on the frontline of the war,” says Ozgur Kaya, a fisherman, pointing toward the Syrian side of the coast. The thud of artillery fire drowns out his voice

In the nearby township of Yayladag, a group of students paces nervously, their faces etched with fear. A stray rocket launched during the ongoing battle between Syrian forces and assorted opposition fighters over the predominantly Armenian town of Kassab has just landed on the edge of town. “That rocket could have hit us. We could have been killed,” says a female student who declines to identify herself by name. The students have petitioned the government to provide a new campus so they can complete the semester out of harm’s way. “And if they don’t, we will just have to quit school,” says a male student, who also chooses to remain anonymous.

Fears that the country might be sucked into the Syrian conflict escalated after Turkey shot down a Syrian air force jet on March 23, not far from Meydankoy, on the grounds that it violated Turkish airspace.

The leader of Turkey’s main secular opposition Republican People’s Party (CHP), Kemal Kilicdaroglu, told Al-Monitor in a recent interview that the downing of the Syrian jet was part of a government scheme to provoke war with Syria. “They want to deflect public attention away from their thievery,” he claimed. Kilicdaroglu was referring to the corruption probe launched on Dec. 17 linking the Turkish prime minister, Recep Tayyip Erdogan, his children and his cabinet ministers to massive graft charges

Until recently, Kilicdaroglu’s assertions would have been dismissed as sniping. But an illegally taped conversation that allegedly took place between Turkey’s Foreign Minister Ahmet Davutoglu, the country’s national spy chief, Hakan Fidan, and the deputy chief of staff of the Turkish Armed Forces, may yet vindicate the CHP leader. In the recordings posted on YouTube (the government blocked access to the site soon after) the men weigh options to spark a war with Syria. Coming only days before nationwide local elections, the leak has had a chilling effect. In Hatay, the elections are widely viewed as a referendum on the government’s Syria policy, with Erdogan’s pro-Islamist Justice and Development Party (AKP) and the CHP running neck to neck. The government has denied accusations that it is plotting war and called the leak “villainous.”

In a small teahouse in Meydankoy, a group of men play cards while keeping an eye on Syrian state television news, which they watch via satellite dish. “We don’t watch Turkish channels, they lie,” growls Ishak Kucuk, a white-haired regular. Like most residents in Meydankoy and surrounding villages in the township of Samandag, he is an Arab Alawite, that is, a co-religionist of Syrian President Bashar al-Assad. And like most, he is viscerally opposed to Erdogan’s efforts to overthrow Assad by supporting the armed opposition. “We know Erdogan wants a war. Why else did they go after Kassab?” Kucuk asks.

Kucuk is referring to the claim that Turkey helped plan the fall of Kassab last week by allowing opposition fighters to use its territory to launch the attack. The claims have been echoed by Assad and members of the Armenian diaspora.

Pressed about where exactly the fighters crossed, Kucuk gestures vaguely toward a row of craggy hills, saying, “from a village around there.” The village in question turns out to be the mainly Sunni Gozlekciler, and nobody is prepared to take a journalist there.

“It's full of terrorists [opposition fighters]. It's unsafe,” claims Muhsin Capar, an Alawite from the town of Samandag. Gozlekciler was evacuated on March 21 after stray shells reportedly struck several houses and the local mosque. The attack on Kassab began the same day. Journalists have been barred from entering the village.

Capar says that prior to the war it would have been unthinkable for an Alawite to feel insecure in a Sunni village. Indeed, Hatay’s Sunnis and Alawites have long prided themselves on remaining immune to the sectarian tensions that have plagued the region.

“In Hatay, it is considered rude to ask people about their faith. We have co-existed peacefully for centuries. But the war [in Syria] is making things difficult and Erdogan is adding fuel to the flames,” Timur Rencuzogullar, an Alawite intellectual, tells Al-Monitor.

Erdogan has been accused of promoting Sunni sectarianism, not only in Turkey but also in countries like Egypt, where his unabashed support for the Muslim Brotherhood has cooled relations with the army-backed government.

Both Alawites and Sunnis were shocked when Erdogan said that "53 Sunni citizens were martyred" in the aftermath of the double suicide car bomb attack that shook the township of Reyhanli last May. Erdogan blamed Assad, but Hatay’s Alawites felt targeted. The presence of an estimated one million Syrian refugees has added to tensions. “It's bad enough that our relatives are fighting each other in Syria,” says Naci Akkaya, a Sunni and a member of the far-right Nationalist Action Party (MHP). Two of Akkaya’s maternal uncles who joined the opposition Free Syrian Army were killed in battle. “It’s a quagmire over there, may God protect Turkey,” he says.