Assad sends signals to Russia, US

While Syrian President Bashar al-Assad has offered Russian President Vladimir Putin full support in the Ukrainian crisis, he's also signalling a willingness to defuse tensions on the border with Israel. 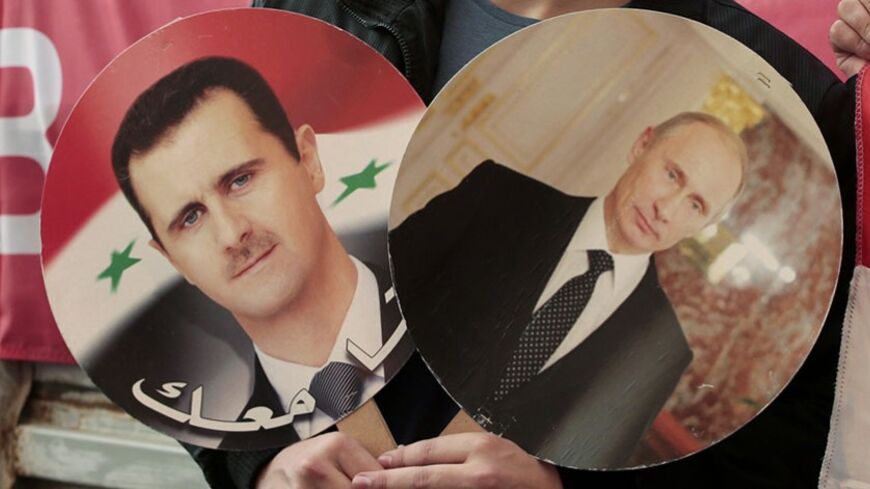 A participant holds images of Bashar al-Assad and Vladimir Putin during a protest in Moscow, Sept. 12, 2013. - REUTERS/Tatyana Makeyeva

Two distinct messages, which may be complementary, were sent simultaneously by Syrian President Bashar al-Assad in the past few days. The first was directly addressed to Moscow. The second was addressed to Washington, but indirectly and with a telling language.

The theme in both messages was that Syria and its regime are prepared for all initiatives, including a settlement in the region.

Highly credible Syrian sources revealed to Al-Monitor the details of the two messages. The sources asserted that in the first few hours of the Ukrainian crisis, especially after the Russian army entered Crimea, Assad sent a private message to Russian President Vladimir Putin informing him that he is putting all of Syria’s resources and territory at Moscow’s disposal in its Ukrainian battle.

The sources added that the message itself may not mean much militarily, because from the first moments of the outbreak of clashes in Kiev it seemed clear that the crisis would be confined. Also, Russian capabilities are enough to accomplish any mission in areas near Russia’s borders. Russian naval bases were never under threat of siege and never needed alternative outlets on the Mediterranean to justify Damascus rushing to offer such outlets.

But even so, the Syrian sources asserted that Assad’s message was very important. There are several reasons for that. First, Syria announced its commitment to the Russian axis regardless of the quality, scope or risk of the confrontation. Thus, Damascus stands with Moscow at any level.

This sends a clear signal that Syria is ready to expand military cooperation with Russia in the future by hosting more Russian sea and ground military assets. That was the purpose of Syria’s offer of placing Syrian territory at Russia’s disposal.

Regarding the Syrian message to Washington, the same Syrian sources said that high-level directives were given to the Syrian government to immediately start preparing the necessary laws and regulations to encourage investments in different areas of Syria’s southwest, i.e., the areas adjacent to the Israeli-occupied Golan Heights, where, since 1967, there has been a buffer zone supervised by the United Nations Disengagement Observer Force (UNDOF).

The same sources indicated that the official Syrian move to give special attention to those sensitive areas happened as US Secretary of State John Kerry was working to achieve a breakthrough in the peace process in the region. Syria’s move seems intended to prepare the southern regions for investment and development. It is as if those moves are competing with Kerry’s efforts with Israel and the Palestinian Authority to achieve a settlement there.

In the same context, the Syrian sources confirmed that the Syrian government has given preliminary approval for a special request to create a specialized factory for agricultural industries in Quneitra, which is adjacent to the occupied Golan Heights. It should be noted that such a request needs UNDOF’s approval to be implemented, which effectively means that the Israeli occupation authorities will also have to consider the matter. Thus, the administrative issue of the Syrian government approving a factory may constitute the beginning of indirect contacts between Damascus and Tel Aviv, under the UN umbrella.

Thus, this Syrian decision regarding investment and development also carries a political message, especially to Washington, that Damascus is ready for initiatives for a peaceful settlement. This is especially so because this signal coincided with a Syrian judicial and administrative campaign aimed at combating corruption in Syria and punishing those benefiting from the ongoing crisis. The talk in Damascus these days about the campaign is that it is likely to affect big regime heads. In fact, a few weeks ago, a list naming persons who benefited from Syrian bank loans by illegally speculating in Syrian currency was leaked. It was also revealed that the Syrian army had uncovered a smuggling operation, which influential figures who are close to Assad personally are suspected of being involved in.

So the move to develop the area near the Golan Heights and the reform campaign instituted in the heart of the capital Damascus may be a repeat by Assad of the broad absorption process carried out by his father, late President Hafez al-Assad, in the early 1980s. After the former Syrian president’s battle with the Muslim Brotherhood and radical fundamentalist groups, especially in Hama, came to an end, he initiated in 1983 and 1984 a reform campaign that led to the fall and dismissal of major regime figures and close Assad associates. More importantly, that move happened as Syria’s alliance with the USSR was getting closer and as Syria was opening up to the West and forming an agreement with Saudi Arabia to face the phenomenon of fundamentalism. Today, it seems as if President Assad is repeating the same scenario. It is as if he is saying to Washington: "I have triumphed against the Islamists again. And you and I are now in a single alliance against extremist terrorism. I am relying on Russia's solid support, but I am open to two steps that are very important to you: reforming the regime domestically, and responding to settlement initiatives abroad."

Thirty years have passed since this scenario succeeded once before. Will Assad now succeed in repeating it? Are others ready for that? That is a question worth pursuing.