Pragmatism, not ideology, guides Iran’s rationale for stronger ties with Iraq in commerce, energy and security. 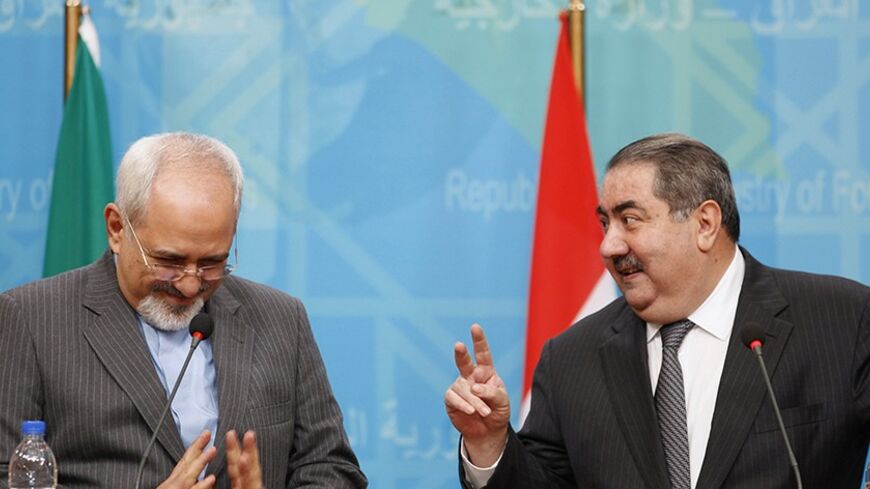 On Feb. 25, during meetings between Iranian Foreign Minister Mohammad Javad Zarif and his Iraqi counterpart, Hoshyar Zebari, the two sides announced that they have agreed to finally implement the 1975 Algiers Agreement to regulate their land and river borders and, most importantly, to dredge the Shatt-al-Arab river, an important waterway for both countries. Experts from both sides are finalizing the details of the agreement, which will be signed within weeks in Tehran. The accord is yet another important step in consolidating a relationship that is becoming the most significant axis in the entire West Asian region.

Zarif, who has traveled to Baghdad twice in the past six months, said, “Iran and Iraq have historic and solid ties that are based on religious, political, geographical and cultural commonalities, and we are very happy that we have put behind us a short but bitter episode of our history. Today, the friendly and brotherly people of Iraq and Iran have two governments that also wish to have friendly and brotherly relations.”

Zebari also commented, “Through calm and continuous work in the past two years among expert committees of the two sides, we have reached good agreements on our land and river borders and on the waterways between the two countries.”

Disagreement over the border along the Shatt-al-Arab river was one of the initial pretexts that deposed Iraqi dictator Saddam Hussein used to declare war on Iran in 1980. The consequent eight-year war devastated both countries. However, since the overthrow of Hussein in 2003 and the emergence of a new political regime in Iraq, the two neighbors have developed unique relations.

No one could have predicted that these former enemies would forge such a close political, cultural and economic relationship. Bilateral trade stood at $12 billion in 2013, making Iraq one of Iran’s top five trading partners. In Iran’s non-oil trade, Iraq is the most significant export market. These exports include light industrial products, foodstuffs, consumer goods, construction materials and electricity. The plan to begin exporting Iranian natural gas to Iraq in summer 2014 will further strengthen relations and increase interdependency. The two governments have signed an agreement to eventually export 25 million cubic meters of gas to Iraq on a daily basis. Iranian companies are also involved in major infrastructure projects such as the construction of dams in Iraq, and investment firms have invested heavily in the country, especially in the sectors connected to the Iranian pilgrimage to holy Shiite sites in Iraq.

New initiatives are being developed to help boost economic relations to new levels. For example, a number of medical centers are being set up in Iran's border regions in order to attract Iraqi health tourists. A growing number of border markets are empowering trade across the borders in an attempt to dissuade border communities from engaging in smuggling activities.

Essentially, Iraq is not only an important trading partner for Iran, but also represents a significant piece in the country’s regional strategy, which aims to have solid relations with all immediate neighbors. Improved ties with all neighboring countries are at the core of Tehran’s national security doctrine. Iraq occupies a special place in that respect because of the historic hostilities as well as Iraq's status as an Arab nation with a long strategic border with Iran.

The multi-faceted and challenging relationship between the two neighbors is the product of a long history in a region boasting some of the key birthplaces of human civilization. In such a setting, there is always potential for disagreement and conflict. However, positive relations are clearly facilitated by the new Iranian government’s win-win approach to regional and strategic issues. In fact, Zarif has underlined repeatedly that regional security approaches are doomed to fail if they are based on a zero-sum game. As such, finding win-win agendas such as the implementation of the Algiers Accord and the dredging of Shatt-al-Arab will further consolidate the existing relations.

Though the countries' growing trade and energy interdependency has become the core of their ties, Iran’s strategic interests in a good relationship with Iraq include security concerns, religious and cultural ties (especially access of Iranian pilgrims to Shiite sites in Iraq), energy cooperation, trade, investment and collaboration on regional issues (such as combating al-Qaeda-style terrorism in Iraq and Syria).

Those who explain the special ties between the two countries as a function of “Shiite solidarity” or as an extension of Iranian-Saudi rivalry fail to understand the Iranian strategy. In fact, Tehran has developed a similar relationship with Sunni-dominated Turkey, a member of NATO and itself a regional rival for Iran. There is no doubt that religious and cultural affinity — especially due to Shiite traditions — help further deepen an already pragmatic relationship. However, pragmatism drives Tehran’s good political and economic ties with Iraq as well as Iraqi Kurdistan, even though tensions exist between Erbil and Baghdad.

Furthermore, those who look at the Iran-Iraq axis as a front against a third party are also mistaken. The two sides are not pushed closer because of a common enemy or because of regional agendas. Having fought a devastating war, the two countries understand the significance of good neighborly relations to prevent any further conflict. If there is an axis taking shape in the region, it is more a strategic axis pursued by Russia, one which could include Iran and Iraq, depending on the outcome of the current regional processes, particularly the Syrian crisis as well as Iran’s nuclear negotiations with the UN Security Council.

These close relations are bound to move to new levels, such as military and security cooperation as well as arms trade. Though officials from both sides have made contradicting statements concerning reports of an existing arms deal, one should see such a potentiality as the natural extension of the current relations. The alleged deal would supply Iraq with light and medium arms, mortar launchers and ammunition for tanks, artillery and mortars — arms that will mainly be used in combating terrorism, according to Iraqi sources.

The fact is that Iran-Iraq relations are poised to reach new levels as both sides are determined to further deepen the relationship. The implementation of the Algiers Accord and the reactivation of shipping in the Shatt-al-Arab river will further broaden economic activity in the border regions — itself a facilitator of closer economic and trade ties between the two sides. Also, politically, Iraq should be seen as the most significant Arab ally of Iran as well as the most noteworthy player in Tehran’s regional security policies. Finally, though the two sides could be seen as rivals in the field of oil production, the broad base of mutual trade has helped turn this sector to an area of cooperation rather than tension.