During the ongoing clashes in Anbar, a number of soldiers have engaged in actions that promote ethnic and sectarian tensions, highlighting the need for the government to enact laws to combat such practices. 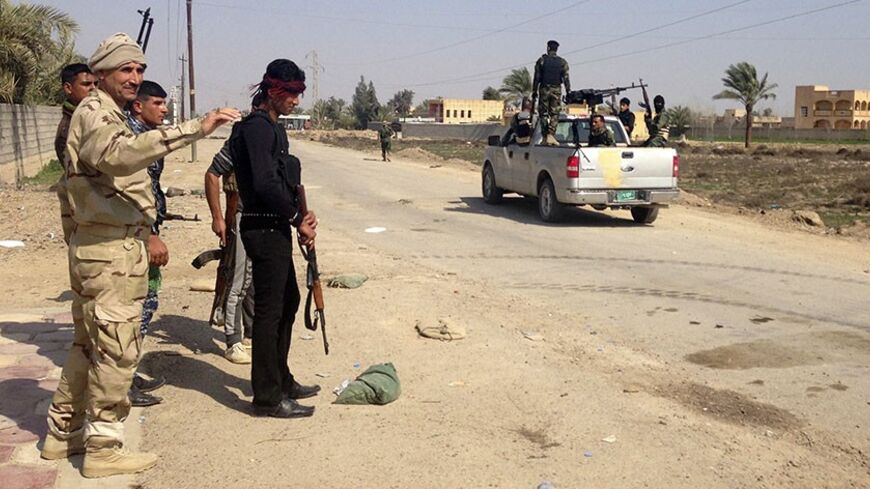 The highly sensitive nature of the military establishment requires extreme caution on the part of its members to prevent any sectarian or racist behavior. This requires legislation and for the political and military supervisors of the army to show some serious will. But these resources are not available in Iraq. There are numerous cases in which soldiers and officers have failed to avoid sectarianism, and this represents a significant violation of the army’s professionalism.

There have been many cases in which the Iraqi army carried religious banners or chanted religious slogans related to a specific sect. Such actions have caused an extensive dispute between Iraqi politicians about their legitimacy. The disagreement is about whether this behavior is a natural right that falls under freedom of religion and expression, or an illegal act on the part of military personnel who do not represent themselves, but the military establishment as a public face of the Iraqi state.

This has led Shiite cleric Ali al-Hussein al-Sistani’s representative, Sheikh Hussein al-Yassin, to express his dissatisfaction with the government’s use of religious slogans in the public domain.

However, not only did these practices fail to stop, but more explicit sectarian actions have emerged during the recent Anbar operations, which are still ongoing. Some of them were accompanied by violations of human rights, such as the burning of bodies to the sound of religious celebratory chants.

In addition to the sectarian behavior, religious slogans and tribal practices reinforce a tribal culture that values revenge. This is what the military must decisively avoid to prevent unprofessional conduct.

There have been numerous cases of practices that violate human rights carried out by Iraqi army soldiers and officers, and these were not followed by any investigation or prosecution of those involved. These violations include attacks on women, beating detainees, killing civilians and mutilating bodies. In 2012, Amnesty International reported "excessive force in response to anti-government protests in Baghdad and other cities … using live ammunition, sound bombs and other weapons to disperse peaceful protests." When these inhumane practices are accompanied by religious slogans, they result in bad and very dangerous effects on the situation that is already characterized by instability and sectarianism.

Developed nations have laws, administrative processes and strict judicial proceedings regarding racist or sectarian behavior in all kinds of fields. They act with the utmost seriousness in such cases, especially if this behavior happens in state institutions, particularly powerful ones such as the military.

For instance, in 2011, the Australian army investigated and punished one of its soldiers for publishing a humorous comment on Facebook containing racist expressions. Moreover, there are educational programs for soldiers about cultural diversity and the need to respect others and avoid any conduct that might suggest racial, sexual or religious discrimination.

There are also a number of international conventions that oblige states to work to prevent any kind of racist practices and anything that causes an atmosphere of intolerance or promotes human rights violations.

Those conventions require that states enact laws to combat all of the above issues and investigate violations. For example, Article 20 of the International Covenant on Civil and Political Rights states that any propaganda for war shall be prohibited by law, and this includes most of the examples above.

In this context, the Iraqi government ought to take the following measures: It should carry out an integrated study of a bill to combat racism, discrimination and sectarianism and then promote appropriate legislation, establish training and legal units in the military to continuously train soldiers and officers on such laws and create investigation units and special judicial courts to enforce this law and swiftly punish those involved.