In an exclusive statement to Al-Monitor, Turkish Prime Minister Recep Tayyip Erdogan said Gulenists are preparing for a "new operation" against him and his government using the pretext of mutah marriages. 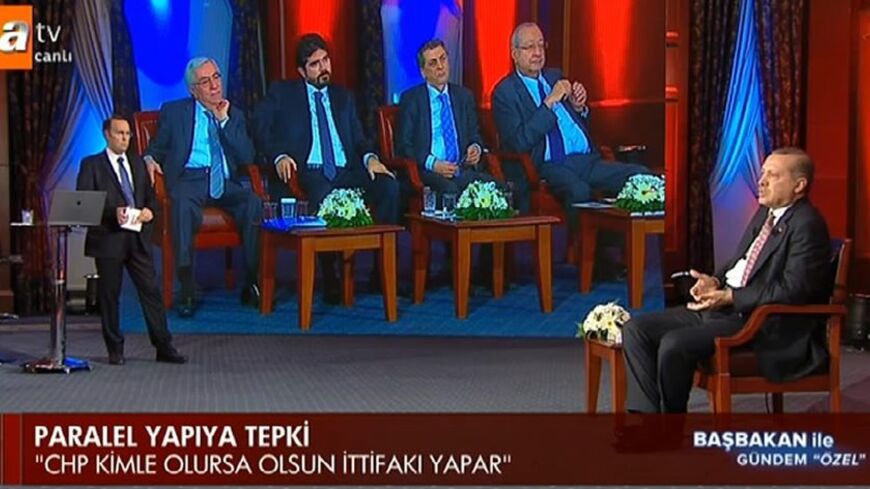 On March 6, Turkish Prime Minister Recep Tayyip Erdogan appeared live on one of Turkey’s major networks, ATV. I was among columnists asking Erdogan questions, and I had the opportunity to converse with him after the program. I asked him about mutah marriages (arranged, short-term marriages accepted by Shiism) and Iran — questions I had not been able to ask during the program because of a lack of time.

It will be best to give a background on the mutah debate to readers who might not be aware. As I reported for Al-Monitor, for Gulenists who are organized within the bureaucracy and judiciary according to their clerical hierarchy, Iran and Shiites are symbols of hatred. Gulenists consistently accuse Erdogan and Justice and Development Party (AKP) ministers of being close to Iran and Shiites, and even acting as their agents. This is where Gulenist conspiracy theories about mutah marriages find their place. For example, the Gulenist media regularly features headlines about the the dangers of the mutah practice to Turkey. An attempt is made to create an image that portrays all AKP officials having contracted for mutah marriages in Iran. Most people in Turkey are not aware of the mutah practice, but the Gulenist media write about it daily.

In an exclusive statement to Al-Monitor, when asked about these mutah marriages, Erdogan replied, "Under the pretext of mutah marriages they [Gulenists] are preparing for an operation against myself and my government. They are again going to make up lies and engage in black propaganda. For them, to achieve their parallel structure all lies and slander are permissible.”

For anyone looking at Turkey from the outside, the practice of mutah marriages may seem irrelevant in relation to Turkey-Iran relations. In recent weeks, there were press reports that Fethullah Gulen had stated that he had seen our prophet in his dreams and instructed his disciples to double the number of their tweets. All Islamic groups in Turkey reacted vehemently to these remarks.

A Gulenist spokesman replied to the criticism with this incredible response: “You are jealous of us, because you don’t see our prophet in your dreams.”

All this is happening in Turkey. Gulenists see themselves as a privileged class chosen by the Prophet Muhammad and Allah. They say they want to rule not only Turkey but the world.

For instance, this is what Latif Erdogan, who became a Gulen follower when he was only 11 years old and who for 40 years was his close confidant, said on a Turkish TV: “Master Fethullah says, 'I spoke with Allah who told me that he had created the universe for [the Prophet] Muhammad but sustains it for me.' I heard him say this. Now he also says, 'If I get angry, there will be a storm, a hurricane.' Everyone knows he says this regularly.”

Latif Erdogan also acknowledged Gulen's intelligence network: "The discussions in the General Staff come to me first before they are send to the president for approval. He has been saying this all along …”

As Nagehan Alci wrote in her recent Al-Monitor article, the problem in Turkey is not simply another disagreement between Gulen and Erdogan. Turkey’s National Security Council considers the organization Gulen claims has been tasked by Allah as a major security threat.

Erdogan, in his March 6 TV appearance, spoke about this issue. “Once you clean up the decision-making mechanisms, the rest will follow. For us, the Court of Appeals is of crucial importance. We will continue to fight against this until we wipe out the last gang. I am no longer using what they call 'secure telephones.' I use regular phones and say, if you want to listen, go ahead. A part of the judiciary cannot operate properly today, because they have been designed that way. This has to be rectified. That is why we started with the Supreme Board of Judges and Prosecutors [HSYK]. I know they listened to hundreds of thousands of people in this country. That is why the mainstream daily Hurriyet, which follows an anti-Erdogan line, reported that the Telecommunications Board [TIB] had tapped an unbelievable number of people. This is a reality accepted by all of us in Turkey.”

At the moment, there appears to be panic among the Gulenists, who are losing their cohesion because of confessions of their crazed accounts of seeing the prophet in their dreams and their unconcealed animosity and hatred narrative about Shiites.

Meanwhile, Gulenists are also producing anti-Semitic texts to spread anti-Shiite sentiments among Sunnis. They are equating Shiism with Judaism. One of the Gulenist websites promoting Shiite hatred writes: “Shiite separatism has moved from political arena to faith. To avoid going under the roof of the ummah and to keep alive the Persian consciousness, they have generated their own specific persuasions. This is similar to what the Jews have done. Shiites have altered all Islamic references, made modifications to establish an alternative religion that looks like Islam. The damage they have inflicted on religion is not any different from what the Jews have to do to the teachings of their own prophet.”

Gulenists are pursuing an anti-Jewish line to provoke Sunni Turks against the Shiites. Under the label of “tolerant Islam” Gulenists are advocating a fanatical and dangerous ideology.