Following her election as head of Egypt’s Dostour Party, Hala Shukrallah sits down with Al-Monitor to talk about political life in Egypt and the role of women in making social change. 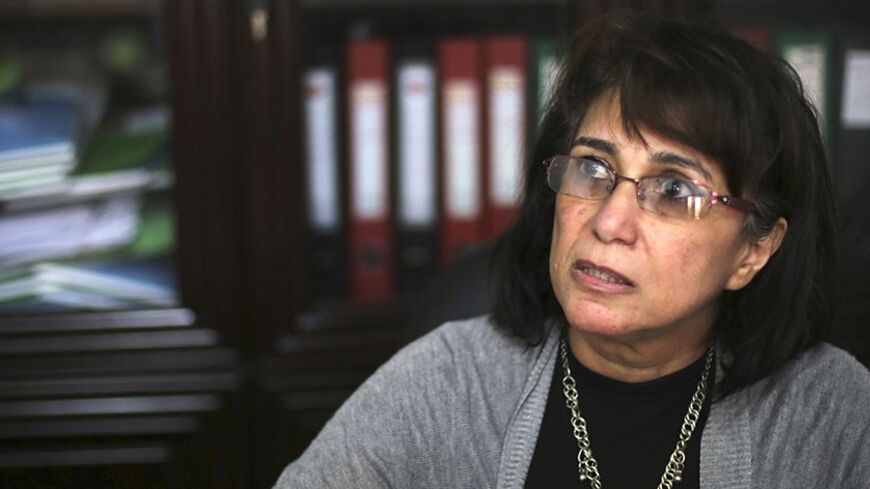 Hala Shukrallah, the new president of the Dostour Party, speaks in her office at the party's headquarters in Cairo, Feb. 25, 2014. - REUTERS/Amr Abdallah Dalsh

Hala Shukrallah is the first woman to lead a political party in Egypt. On Feb. 21, she won the elections of the Dostour Party with 108 votes, compared to 58 votes for her closest rival, Jamila Ismail.

Al-Monitor interviewed Shukrallah about her role as a woman in political life and her vision of Egypt’s future under the current precarious circumstances in the country.

Al-Monitor:  First, we would like to congratulate you on winning the position of head of the Dostour Party and for being the first woman to head a major party in Egypt. In your opinion, does this change the stereotypical image of women being unable to lead organizations or parties?

Shukrallah:  Thank you very much. I think that the best way to fight inaccurate stereotypes of women in society is through participating in various activities, instead of just talking. Besides, the image of women has improved since they have been participating in all of life's matters.

Al-Monitor:  How has this stereotype changed, when women in Egypt still suffer from discrimination, violence and sexual harassment?

Shukrallah:  People who want change always react quicker than the dominating political forces. That is why we find women participating in protests and criticizing violence against them, while political parties are too slow to respond and do not take quick action to resolve the crisis.

Sometimes, the image of women is distorted to serve the political ends of forces that do not want change. They either adopt a speech that opposes women under the pretext of religion — like some Islamic forces who claim that the voice of women is provocative and their appearance [in public] is indecent — or use methods like harassment to forbid girls from taking to the streets and expressing their opinions.

Al-Monitor:  Does a woman winning the presidency of the Dostour Party indicate that the awareness of the party's members has increased?

Shukrallah:  The victory was not intentional at all. The elections included three main lists — my list, Ismail’s list and Hossam Abdel Ghaffar’s list. The party's members chose between the lists according to each candidate’s program for leading the party and implementing its role in society.

Al-Monitor:  Since you are the first woman to lead an Egyptian party, will that be a reassuring factor for Christians, especially after the latest incidents of violence, the arson targeting some churches and the attacks on the homes of Christian families?

Shukrallah:  My situation is different. I am a Christian woman who is married to a Muslim. So, I am in between both religions. In general, I completely refuse any discrimination against any person, whether based on religion, gender or any other element.

Al-Monitor:  After winning the leadership of the party, did you contact representatives of the [Coptic] Church? What role will the Dostour Party play in the issue of violence against Copts?

Shukrallah:  I still haven’t communicated with any members of the church. All meetings were held with other political parties. Before joining the Dostour Party, I was the leader of the Egyptians Against Religious Discrimination (MARED) movement. The movement used to tackle all issues related to violence against individuals based on religion.

Regarding discrimination, I think that the party will deal with all cases that involve individual abuse, in an attempt to achieve social justice and ensure a decent life for citizens.

Al-Monitor:  Have you faced any sort of discrimination inside or outside the party because you are Christian?

Shukrallah:  I don't like to focus on this issue, and I don't like to stereotype people and put them in categories. My actions, opinions and stances define me. Religion, gender and clothes do not define us.

Al-Monitor:  The National Salvation Front [NSF], which the Dostour Party was part of, played a major political role before June 30. But, it disappeared and had no more influence in the street after that. Why is this?

Shukrallah:  The NSF played a specific role to confront the regime of former President Mohammed Morsi after he issued the Constitutional Declaration in November [2012] — a declaration that placed him above the constitution. After that, the effective role of the NSF ended with the end of Morsi’s rule.

Al-Monitor:  Will we see other political alliances that are similar to the alliances of the NSF?

Shukrallah:  We might witness in the future — not in the near future though — the formation of other political blocs. The current scene in Egypt is limited to two parties, the Muslim Brotherhood and the army. They are both resorting to violence to confront one another. It is normal for civil alliances to disappear in this violent environment. These alliances, after all, believe in democracy and do not advocate violence or weapons at all.

Al-Monitor:  How would you describe the current situation in Egypt?

Shukrallah:  The Egyptian scene is highly polarized. After finally getting rid of an atmosphere in which opponents [of the Muslim Brotherhood regime] were accused of being infidels, we’ve now entered a stage where anyone who opposes the current regime is accused of treason.

Al-Monitor:  Who is responsible for making oppositionists look like traitors in Egypt?

Shukrallah:  The media, of course. The media have worked on erasing all traces of the January 25 Revolution and on killing the dreams of the youth who participated in the revolution in the first place, to demand freedom, a better life and social justice.

Al-Monitor:  What do you think is the solution to the political crisis that Egypt is suffering from?

Shukrallah:  We are in dire need of two things. First, we must stop violence and use the most efficient means to limit it. Second, we must promote freedom of speech and expression, because ideas prevail through dialogue and debate, not through violence.

Al-Monitor:  What do you think of Field Marshal Gen. Abdel Fattah al-Sisi’s candidacy in the presidential elections?

Shukrallah:  First, he still hasn’t submitted his candidacy. In case he or any military person runs for the elections, I think this will weaken the army because politics relies on criticism and accountability of officials. Army leaders do not accept [criticism], and it might undermine the mechanisms of the democratic process. It is better that all presidential candidates be equal in their civil background so that no candidate is favored over the other due to his relation with the state’s institutions.

Al-Monitor:  Can the Dostour Party sit with the Muslim Brotherhood at the same table to agree on a way to deal with the current situation in Egypt?

Shukrallah:  This won’t happen before the Brotherhood is punished for its actions perpetrated during Morsi’s rule and before the Muslim Brothers who are implicated in the acts of violence are seriously punished. Also, the Brotherhood needs to radically alter its line of thought, which is based on accusing others of apostasy and dismissing the people who disagree with it.

Al-Monitor:  Will the Dostour Party nominate a presidential candidate?

Shukrallah:  We haven’t taken a decision regarding the presidential elections yet. We will probably support Hamdeen Sabahi, as he is the civil candidate affiliated with the January 25 Revolution.

Al-Monitor:  Will we see a future for women among the candidates for presidency of Egypt? Might this woman be you?

Shukrallah:  Why not? Many women in Egypt are highly competent to lead the country. As for me, I still haven’t thought about running for president.