In an exclusive interview with Al-Monitor, veteran Egyptian politician Amr Moussa says he supports Gen. Abdel Fattah al-Sisi running for president and predicts that the Geneva II talks will not lead to a solution in Syria. 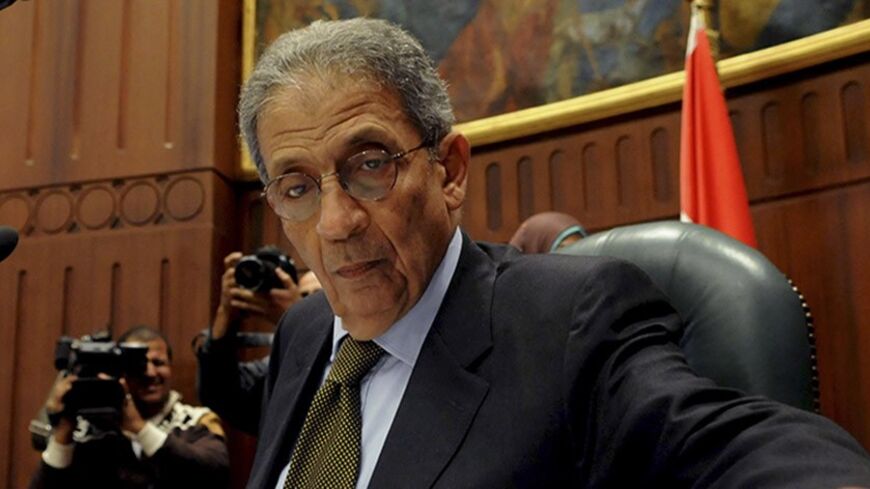 In an interview with Al-Monitor just two days after the ratification of the new Egyptian constitution, Amr Moussa, an Egyptian politician who has assumed many key positions and has great influence in Egypt's foreign policy, said he would not run for president again because he is supporting Gen. Abdel Fattah al-Sisi.

According to Moussa, Sisi is capable of achieving harmony between the presidency and the army. He also noted that the constitution will constitute a new chance to move forward from the transitional period and establish the third republic on the basis of democracy and a civil state. Moussa shed light on the weakness characterizing the role of Egypt within its regional surroundings, expecting the Geneva II talks, in which Egypt is taking part, not to reach a settlement for the Syrian crisis.

Moussa served as Egypt's foreign minister and then as head of the Arab League. He re-emerged on the Egyptian political scene after the January 2011 revolution, presenting his candidacy for president. However, Moussa did not make it to the seat of power after he received only 10.9% of the votes. A number of decisions made by the administration of former President Mohammed Morsi and his government, and described by Moussa as unwise, have led him to return to the political scene to contribute to the formation of the National Salvation Front (NSF). The NSF was a strong backer of the deposition of Morsi and the ouster of the Muslim Brotherhood. After that, Moussa headed the 50-member committee tasked with drafting the new Egyptian constitution. On Jan. 18, 98.1% of voters approved of the constitution in a referendum.

Al-Monitor:  Given that you were in charge of the committee that drafted the new constitution, how do you perceive the Egyptian political scene, after you succeeded in passing the constitution as part of the first step toward the road map announced on July 3, 2013?

Moussa:  The post-constitution phase has now begun. Soon enough, we will hold presidential and parliamentary elections, and subsequently we will have an elected president. The latter will not be consensual, because democracy only acknowledges [the results of] elections. As such, we will be done with the transitional phase and the rule of the constitution will be applicable. Legitimacy will come into effect in its new form and the [era of the] third republic in Egypt will start. This republic will radically and completely differ from that of deposed President Morsi, which lasted for only one year. Today, we pave the road for a civil state based on rights and freedoms. Despite the delicacy of the political and economic situation, I am optimistic about the ability of Egypt to surmount this phase, because it stood its ground in spite of the situation. I took part in the NSF, which was formed to save Egypt from the hands of an unwise administration. We provided the Muslim Brotherhood government with many solutions and proposals. Yet, they had a psychological barrier. Khairat al-Shater told me, “June 30 will pass by without changing a thing.” They were not aware of the popular momentum and the wrath of the Egyptians.

Al-Monitor:  Those opposed to the constitution said that it contains many defects and that it consolidates the military state. Additionally, some youth refrained from participating in the referendum. What is your opinion on this?

Moussa:  We are satisfied with this constitution. Its articles meet the requirements needed to face the repercussions of the 21st century. The most important part is that the constitution stipulates the rule of law. We do not know the real reason behind the non-participation of the youth in the referendum, this is why we cannot respond to this point.

Al-Monitor:  There are talks about a consensus on you as a candidate for presidential elections in the event that Sisi refrains from presenting his candidacy. Have you decided whether or not you will participate in the elections?

Moussa:  Information indicates that Sisi will be named a candidate. I support his candidacy and I will vote for him in the elections. I did not think about running in the elections. Sisi will assume the seat of power in a democratic way, because he will win the majority of the votes. There is nothing else to say.

Al-Monitor:  Is that why you support the popular campaigns supporting him, even though he did not present a real electoral platform?

Moussa:  These campaigns constitute a state of enthusiasm and are not aimed to mobilize crowds to clear the way for Sisi. I visited a large number of provinces and I made sure he is supported by the majority of Egyptians. However, an electoral platform is crucial and it is certain that the future president will abide by the constitution.

Al-Monitor:  Is it possible for a president with a military background to establish the civil state the constitution stipulates?

Moussa:  The constitution that was approved by the people, after the referendum’s results were announced last Saturday [Jan. 18], is the genuine, ruling document of Egypt. Sisi coming from a military background to rule Egypt would be just like any other president who is experienced and has assumed other positions in the past. The army institution will have a new commander, and there will be harmony with the president. Additionally, the constitution will settle any dispute.

Al-Monitor:  To achieve a comprehensive internal reform in Egypt, you called for reconciliation between the Muslim Brotherhood and the political powers. However, all these initiatives were left uncompleted, and violence and confrontation are ongoing. What is the cause of this in your opinion?

Al-Monitor:  After the ratification of the constitution, do you see any positive change in terms of the international stance toward Egypt after the deposition of Morsi?

Moussa:  I do not agree with the statement of the US Secretary of State John Kerry in terms of the wording and the assessment of the situation in Egypt. We stress that the constitution is the first step toward a genuine democratic state in Egypt. However, we cannot prevent other parties from commenting on the Egyptian situation. Our job is to reverse this negative image. I expect Turkey and Qatar to reassess the Egyptian stance after the ratification of the constitution.

Al-Monitor:  Could the constitution be used as a negotiation card to regain the US military aid to Egypt?

Moussa:  We cannot foretell the US reaction toward Egypt. However, I met today with a congressional delegation currently visiting Egypt, and I sensed a more positive stance.

Al-Monitor:  You said you would not take part in the partisan life even though you have established a political party. How do you perceive the future of partisan life in Egypt?

Moussa:  The decision not to practice partisan work is final. What will define the future of parties is their performance in the upcoming parliamentary elections. If this chance is lost, there will be no genuine partisan work in Egypt. I expect the coming parliament not to comprise a majority. The constitution will not prevent anyone from running in the elections, whether belonging to the past era or not. Let us leave the choice for the people. Egyptians, however, should choose their candidates carefully.

Al-Monitor:  How do you see Egypt’s role externally in light of the domestic issues and talk about their weak impact on the regional environment, in particular the Middle East and Africa?

Moussa:  Egypt’s role is currently very weak. … However, once the troubled transitional period is over and stability is restored, no one will stop Egypt as long as we make sure to place it on the right track toward the future. It is true that we have great challenges to face internationally, namely at the African level, yet, our duty now is to reform Egypt’s conditions under diplomatic efforts to preserve its stance externally.

Al-Monitor:  You were the secretary-general of the Arab League for years. How do you explain its failing to solve the Palestinian issue and the ongoing conflict in Syria?

Moussa:  The Arab League has essential missions, but the escalation of problems and crises in the region has increased its tasks. Regarding the Palestinian issue, the league introduced the Arab Initiative. However, in my opinion, the main party responsible for the loss of the Palestinian cause are the Palestinians themselves. Palestinian negotiators do not need advice, because they are taking the right stance. Nevertheless, the division in their ranks and the conflict between Fatah and Hamas is what is undermining their cause. History will hold Palestinian officials responsible for the loss of rights of the Palestinian people before blaming Egypt or any other Arab nation for that matter. With the decline of Egypt’s role at the regional level, Palestinians ought to have a key supporter.

Al-Monitor:  Egypt and the Arab League are participating in the Geneva II conference to resolve the conflict in Syria. What are your expectations?

Moussa:  Nothing will happen in Geneva II and I do not see any solution in sight. Will the conference be able to determine the future of power in Syria or put an end to the war? In my opinion, the solution lies in the hands of the UN Security Council alone. It is the only party that can end the shooting and send peacekeeping missions and talk about legitimate rule in Syria, because it has the power to do so. An Arab action is not viable to solve the Syrian crisis at the moment.