Egyptian diplomat Amr Moussa tells Al-Monitor's Cale Salih in an exclusive interview that although strong US-Egypt relations are in the best interests of his country, he hopes Egypt will find itself in a position to say no to the US when necessary. Moussa also defended President Morsi, his one-time foe, praising his achievements in office. 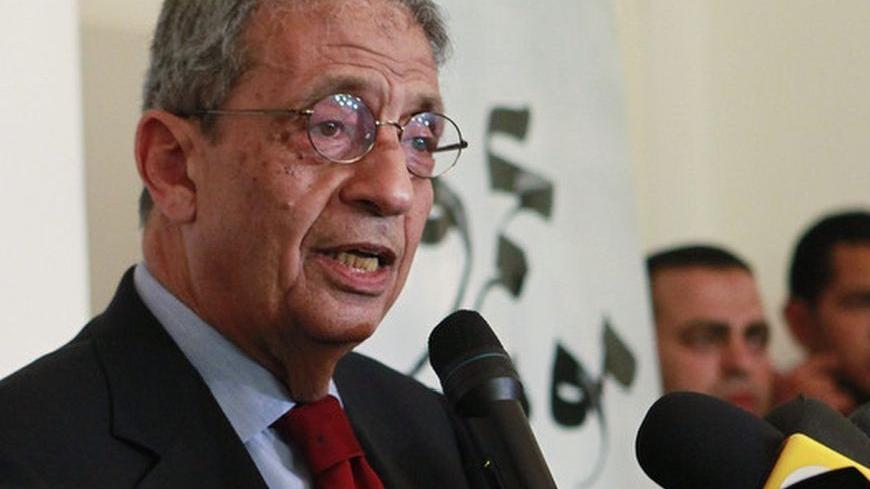 Former Arab League chief Amr Moussa speaks during a news conference in his campaign headquarters in Cairo, May 28, 2012. - REUTERS/Asmaa Waguih 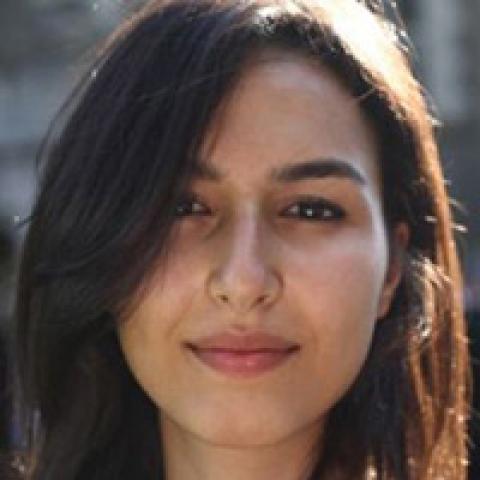 In an exclusive interview with Al-Monitor, veteran Egyptian diplomat Amr Moussa said that although strong US-Egypt relations are in the best interests of his country, "the era of 'yes sir' has to come to an end."

Moussa also defended the stand of Egyptian President Mohammed Morsi, his one-time foe, saying "Egypt is in a state of revolution, so how can a new republic based on revolutionary process just ignore the situation in Syria or look the other way?"

Moussa, a former secretary-general of the Arab League (2001–2011) and Egyptian foreign minister (1991–2001), ran this year in Egypt's first presidential elections since former President Hosni Mubarak's ouster. He managed 11% of the vote, failing to qualify for the run-off, which was won by Muslim Brotherhood candidate Morsi. Moussa is now the leader of two coalitions — the Egyptian Conference Party and the Coalition of the Egyptian Nation — representing secular and nationalist parties. The coalitions are dogged by fragmentation but held loosely together by the common aim of challenging the Muslim Brotherhood-dominated parliament and executive office.

Despite their conflicting ideologies, Moussa praised some of Morsi's achievements since assuming office, including the president's curtailment of the military's role in politics. Moussa said Morsi's close relationship with Turkey's Islamic-leaning Justice and Development Party (AKP)  are in the "best interests" of Egypt and Turkey.

The interview is below. (To see other Al-Monitor newsmaker interviews, click here.)

Al-Monitor:  Recently, 25 parties and factions were merged to form the Egyptian Conference Party (ECP) under your leadership. Could you tell us about the EPC's platform and its relationship with the Muslim Brotherhood?

Moussa:  In fact, we have about 67 parties, and my point is that this is too much. I invited many of them to get together, and around 25 parties accepted ... Then this merger will be part of a larger coalition with Wafd and other parties. So there are two steps — merger and coalition. Then the third step will be an understanding ... that we will have a big front of like-minded politicians, parties and programs.

Most of those parties [in the EPC] have not voted for the Muslim Brotherhood in parliamentary nor in presidential elections. We remain a democratic, civil, nationalist movement with no religious character.

Al-Monitor:  And your relationship with other liberal parties, like Wafd, who are not in [the] EPC?

Moussa:  I, myself, am the honorary chairman of the Wafd and at the same time am calling for other parties to merge and form their own party or congress party ... then [I am calling for] that party and others that have not joined the EPC to join the Coalition of the Egyptian Nation, which Wafd is playing a central role in.

Al-Monitor:  How would you assess President Morsi's first months in power?

Moussa:  His first three months in power have been marked with foreign visits that were highly successful or were rather successful. But on economic and services, et cetera, there was no movement to talk about. Another achievement of his was the removal of military involvement in government. This is all good, very important.

I hope that the next movement will be marked by domestic work ... it is incumbent upon the president to work on domestic matters. There is no time to be wasted.

Al-Monitor:  In August, President Morsi sent [Field Marshal] Tantawi and [General] Anan to retirement. There is a lot of speculation about who was behind this move and why, and whether or not it was part of a larger deal. What is your view on what happened, and what do you consider to be the appropriate role of the military in post-revolution Egypt?

Moussa:  The Egyptian people were satisfied that the SCAF's political life has come to an end. This move was supported not because Morsi did it, but because it had to be done. When that happened, in August, civilian rule started and military rulers, governors and presidents came to an end. On that date, the system that was created by the revolution of 1952 came to an end ... The role of the army is well known. The army is to defend the country and to be trained and be in the best shape ever. Not to rule, not to govern, but to be always ready to defend the country.

Al-Monitor:  Morsi also abolished a constitutional declaration, which was instituted by SCAF, that limited the president's powers.

Moussa:  We are now writing another constitution that defines the powers of the president and parliament and adopts a mixed system, between presidential and parliamentary. So whatever the declarations, they are temporary. I hope that we can finish drafting the constitution as soon as we can, within the next month or so, so that the issues pertaining to constitutional declarations will be raised.

Al-Monitor:  Morsi promised that his first two political appointments would be a Coptic Christian and a woman as his two vice presidents. This didn't happen. How do you assess the state's protection of the rights of Christians and women in Egypt?

Al-Monitor:  I want to move on to US-Egypt relations. An anti-Islamic film has sparked violent protests outside US embassies in Egypt, Libya and across the Arab world. Today [Oct. 2, 2012] in Cairo, another trial was held for several NGO workers affiliated with the International Republican Institute, the National Democratic Institute and others. The NGO trial has been ongoing for almost a year, and today it was postponed again. How do you see the relationship between Egypt and the US evolving?

Moussa:  I firmly believe the relationship between Egypt and the US must be the best strategically and tactically, economically and politically ... It is in our best interests to have good, solid relations with the US. It is not in our best interests to have tense relations with them. Egypt is the largest country in this region, so it has to have a place in the American strategy of relations with the Arab world. It's two-way traffic ...  I hope that there will be clear, frank and transparent relations between us. And I hope that the Egyptian government and Egyptian president will be in a position to say yes to the US, representing the consensus of the nation. And also to say no to the US when no is necessary. The era of "yes sir" has to come to an end. I believe it came to an end. But this doesn't mean that we just challenge the US for nothing, for the sake of challenge. We have to be mature and work and cooperate, and this should be the rule.

Al-Monitor:  What do you make of President Morsi's evolving relationship with Turkey, which some view as being based on the two parties [AKP and the Muslim Brotherhood's Freedom and Justice Party, or FJP] sharing Islamic ideology?

Moussa:  No, those relations with Turkey are in the best interests of the two countries, not of the two parties. The positive approaches between Egypt and Turkey and vice versa started well before the election of Mr. Morsi. If there are relations between the two parties ... it's their business. The country has nothing to do with it. But it is Egypt-Turkey, not the AKP and the Egyptian party [FJP].

Al-Monitor:  How do you explain President Morsi's strong stance against the Syrian regime?

Moussa:  It's only normal. Egypt is in a state of revolution, so how can a new republic based on a revolutionary process just ignore the situation in Syria or look the other way? Egypt will have to be sincere and base itself on its own revolution that has revolted against a similar regime.

Al-Monitor:  One last question about the Egyptian economy. The government is negotiating an IMF loan package [of $4.8 billion, the largest loan in Egypt's history]. What is in store for Egypt's economy in the coming years?

Moussa:  I don't see it as a desperate situation. Egypt is capable indeed of coming out of this very dark negative economic situation into a better day. I believe this is possible but not because we have a loan from the IMF, but because we can really make our wheel of production and economic strength work. It is a matter of management. We have to build something around the investment — tourism, joint ventures, loans, aid programs, all that.

Cale Salih was most recently a MENA Fellow for the International Crisis Group, based in Beirut and Cairo. Follow her on Twitter @callysally